Restaurant: Salare
Location: Seattle
Why He's Amazing: The menu at Salare represents the chef’s outstanding and diverse training, from salumi-making in Italy to working the line at Per Se in New York City and cooking over live fire at Seattle’s Bar Sajor. His superb sweetbreads with collard greens merge his fine-dining experience with his Southern roots.
Culinary School: Le Cordon Bleu College of Culinary Arts (Orlando, FL)
Background: Bar Sajor, Sitka & Spruce, Seattle; Lincoln, Per Se, NYC; The Herbfarm, Woodinville, WA; The French Laundry, Yountville, CA
Quintessential Dish: Quillayute River king salmon cured in honey and chamomile with poached and raw rhubarb, crème fraîche and eighty-percent rye bread
Heritage: "I'm from the South. My family did it up Southern style: collard greens, chitlins, black-eyed peas, corn bread; that's kind of the foundation of my cooking."
His Philosophy: "Don't mess up a good ingredient."
Enduring Food Obsession: "I'm a burger freak. I love burgers. I'll eat a cheap burger, I'll eat an expensive burger—ground meat, man! Just put it on a bun! I won't technically go to a fast-food burger place anymore, but I used to…"
Unusual Drinks: In addition to wines, beers, ciders and mead, Bar Sajor has kombucha on draft, sodas in flavors like rye and quince, and Jordan's locally famous shrubs—vinegar-based beverages accented with huckleberry or beet, for instance, depending on the season.
4 Facts about Edouardo
1. Southern StudentEdouardo Jordan grew up in St. Petersburg, Florida, learning about Southern classics at his family's table. Then, at the University of Florida, he became friends with fellow students from Haiti, Jamaica and Cuba. "Holy moly, it was a whole new universe of food," he says. "My best friend, Jacques Clervil, was Haitian. I'd go to his house and he'd play video games and I'd hang out in the kitchen with his mother, watching her cook."
2. The French Laundry's "Fast Eddie"Once he graduated from Le Cordon Bleu cooking school in Orlando, Florida, Jordan scored an apprenticeship at The French Laundry in Napa Valley. "On my first day, the first person I saw was Thomas Keller. The man." Jordan worked with butcher Mark Bodinet, who gave him the nickname Fast Eddie. "I started off as slow as the average intern, but once I was going, I got projects done fast. Still, you had to do things right. The techniques, the ideal of not just being a chef but also of being a great one: That's what I learned at The French Laundry."
3. Charcuterie CraftsmanAfter working the meat station at The French Laundry, Jordan decided to travel to Italy to study salumi. "I wanted to understand Old World traditions; we don't have many of our own traditions in America," he says. He ended up at Al Vèdel, a renowned restaurant and salumeria in Colorno, outside Parma. "I spent mornings making culatello, coppa and pancetta; at night I worked the line in the kitchen and learned how to create epic pasta."
4. Seattle Virtuoso"The Salare menu is a beautiful smorgasbord," says Jordan. As an ode to Southern cooking, he serves corn bread as part of his bread service and pork trotters and collards as a small plate. His masterful spaghetti with razor clams, squid ink and coconut milk evokes three key influences: his Haitian best friend, his French Laundry experience and his pasta training in Italy. 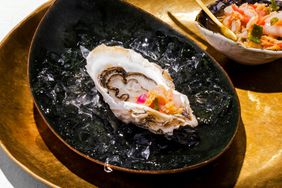 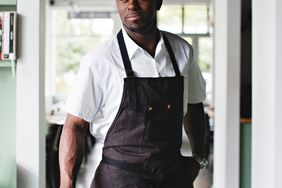