In an attempt to make a wine that captures the ephemeral essence of California, the brilliant Randall Grahm is breeding 10,000 new grape varieties at an experimental vineyard. Here, he explains his "weird, different, crazy" vision.

At your new Popelouchum vineyard near San Juan Bautista, California, your plan is to breed thousands of new wine grape varieties. Why?
For a lot of reasons! One, it's going to be really fun. Plus I might discover something new and different, with a flavor that didn't exist before. Also, I could potentially find an interesting grape that might be well suited to a changing climate, as one possibility. And this next reason may be a little more difficult to explain, but I'm a lover of wines of place, which is what I hope to make here. Everything else is pretty much beside the point.

What's the Randall Grahm definition of a "wine of place"?
A wine so distinctive it could only have come from the place where it was grown. It has a signature, a fingerprint that's independent of the will of the winemaker. Take Chambertin, the grand cru in Burgundy. You have many different winemakers, and they all have their own interpretations, but there's always some Chambertin-ness that comes through in each of those wines where you can say, "Ah ... that's clearly Chambertin!"

But Chambertin—all of Burgundy, really—has had hundreds of years to figure that out.
Exactly. So the question is: How do you create a wine of place in California in a short lifetime? It seemed to me that if you make a wine that's a blend of 2,000 or 3,000—or 10,000—genetically distinct varieties, then the character of any one specific variety won't be present anymore. All you have left is a symphonic expression of the land. Or, unfortunately, noise, randomness and cacophony.

Just breeding all of these grapes is going to take more than a decade. What if, at the end, the result actually is noise and randomness?
Then I end up with a wine that doesn't taste like anything. Or, even worse, something that tastes like Pinotage.

And you crowd-funded the Popelouchum project?
Some of it. Honestly, it was a nail-biter, but we pulled it off at the last minute. We raised $173,000. That was miraculous.

At Bonny Doon in the '80s, you started growing Rhône varieties when they weren't popular in California; now you've moved on to even more obscure grapes—potentially thousands of them. What's the attraction?
My shrink could probably be more illuminating on that subject than I could be. Maybe it's attention deficit disorder on my part, but I just like weird, different, crazy things.

What other weird things do you have going on?
I'm also growing some very strange varieties that aren't part of the overall project. I'm fascinated by grapes like Timorasso and Ruchè, from Piedmont, which are fantastic. Or Rossese, from Liguria, which is one of the coolest grapes on the planet.

Do you think there's increasing interest in these grapes?
I think in Europe there's a renaissance among young people, a rediscovery of old styles, old varieties, old techniques. I wish I could be equally optimistic or cheerful about the New World. But here there's been less experimentation and less of a flourishing of diversity, more homogeneity.

Hence your interest, I suppose, in planting Rossese, which really is totally obscure.
Exactly. I was reading an article by Andrew Jefford [in Decanter] about Rossese, and he interviewed a grower who said, "Rossese is a wine made by empty spaces." At first I thought he meant that the vineyards were spread out. But what he really meant was empty spaces on the palate, in how the wine tastes. It's like jazz—there's the space between the notes that allows you to fill it in. That's what Pinot Noir does in Burgundy, or Nebbiolo in Piedmont.

Not to be crass, but will your Popelouchum project ever conceivably make any money?
It isn't intended to! In fact, just two days ago we got IRS approval as a nonprofit. So now I've got to find somebody to raise money and administer this thing. The IRS actually approved our application in 30 days, which is ridiculously fast.

I hope that's not because they're certain that you could never make a profit anyway.
Exactly. "Our financial analysts have shown there's just no possible way." Oh, dear!

2013 Los Bermejos Maceración Carbónica Listán Negro ($23)
"A friend poured this floral red for me blind. 'Is it from Mount Etna?' I asked. 'Not a bad guess,' he said, 'because the vines were grown in the Canary Islands' very volcanic soil.' Those rocky vineyards look like they could be on the moon."

2014 Tenuta Delle Terre Nere Etna Rosso ($23)
"For me, a great wine seamlessly fuses the world of the organic (fruits and flowers) with the inorganic (dirt and minerals). This red from Mount Etna, in Sicily, does exactly that."

2014 Ermes Pavese Blanc de Morgex et de la Salle ($30)
"This wine is made from the antique Prié Blanc variety in Italy's Valle d'Aosta region. This is the essence of an alpine wine: very crisp and crystalline, with a scent of white flowers."

2013 Ar.Pe.Pe. Rosso di Valtellina ($35)
"The Valtellina region of Lombardy offers a lean, earthy version of Nebbiolo. Ar.Pe.Pe.'s version has an elegance that reminds me of the elusive charms of a great Burgundy."

2014 Maximin Grünhaus Abtsberg Spätlese riesling ($40)
"I am crazy about the Maximin Grünhaus wines; they're graceful and haunting, redolent of lemon, lime and tropical fruit. And with their razor-sharp acidity, they live seemingly forever."

2013 Nikolaihof wachau im weingebirge Smaragd Grüner Veltliner ($65)
"Nikolaihof is an incredibly skilled biodynamic grower in Austria; its wines, both Rieslings and Grüners, are among the most expressive in the world. There is something about them—I call it life force or vinous qi—that gives them the persistence and rootedness of a Shaolin martial artist."

2009 Marcel Deiss Altenberg de bergheim Grand Cru ($96)
"In the early 1990s, Jean-Michel Deiss decided to blend together all the local Alsace grapes in his grand cru vineyards (Riesling, Pinot Gris, Traminer, Pinot Blanc, etc.). He felt the character of the site would be better expressed by not concentrating on any one variety." 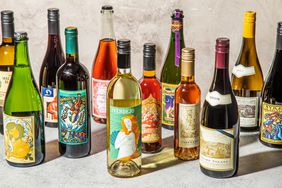 The Best Damn Wine Club I Ever Joined