Why Israel is one of the most exciting wine-producing countries in the world.

There's evidence that wine has been produced in Israel for as long as 10,000 years, yet it's only in the past few decades that the country's wine has won serious international respect. Despite having crucial pieces in place for a thriving wine industry—a Mediterranean coastline and varied topography—Israeli wine has, until recently, been more or less synonymous with the kind of ripe, occasionally over-oaked reds that so many emerging wine-producing countries pump out in the beginning.

Today, however, Israel is one of the most exciting, vibrant wine-producing countries in the world.

Until a few years ago, according to Yair Yosefi, co-owner with Omer Ben Gal of Brut restaurant in Tel Aviv, Israeli wine wasn't generally living up to its potential. Now, however, the country's wine sector is in "what we are calling the Fifth Wave, or the New Wave," he told me. It's named after the "French cinema d'auteur, because everyone in this wave are creators and artists. The decisions are not made by VPs of sales, but by the same guy who makes the wine and bottles the wine and sells the wine. We also call it New Wave because like the music of the '80s, it's very avant-garde."

Yosefi explained that this Fifth Wave of Israeli wine is defined by producers who are working to express not just the individual regions and vineyards where they grow their grapes, but also by their experimentation with a more varied range than the Cabernet Sauvignon, Merlot, and Chardonnay that predominated in Israel for so much of its modern winemaking history. Today, great wines are being produced from Syrah, Carignan, Semillon, Chenin Blanc, and more. Even indigenous varieties like Marawi are finding a voice, and Cab and Merlot are being produced in a way that they are expressing the land they're grown in, not just the vision of the winemaker or the supposed demands of the market.

In the United States, however, there is still a fair bit of misunderstanding when it comes to Israeli wines, much of it driven by incorrect information about what kosher production involves, and a conflation of boutique Israeli wines with the cloyingly sweet stuff that's such a mainstay of Jewish religious celebrations.

As a general rule, the laws governing the production of kosher wine aren't all that different from those required for organic bottlings anywhere in the world. Mevushal wines, or wines that have essentially been flash pasteurized in order for certain highly observant Orthodox Jews to be able to consume them no matter where they are or who pours them, are an entirely different category. The vast majority of kosher wines are not mevushal, and if they are, that status will be noted on the label.

As for the conflation of kosher wine (and Israeli wine in general) with the notorious sweet wines that so many of us had to choke down at Passover seders and at the end of bar and bat mitzvah services, they have no relation whatsoever with the great Israeli wines of today. Manischewitz, in fact, is made in Naples, New York, more than 5,700 miles from Tel Aviv.

The wines I recommend below are all kosher, which is representative of nearly 100 percent of Israel's wine production, yet none are mevushal, which I firmly believe has an adverse impact on the wine. These 12 recommendations, listed alphabetically, are produced in enough quantities to be relatively available around the United States, either at local wine shops or online. Though they're not all boutique wines—many aren't technically part of the Fifth Wave at all, as Yosefi describes it, and some (though not all) are made by larger-scale producers—they all indicate a similar sense of place and care with which those wines are being crafted.

Plush and giving, with peppercorn-spiced black cherries, cafe mocha, and a touch of raspberry coulis. The finish reminds me of sachertorte and almond flour. Black and red berry fruit flavors are lifted with a subtle floral note. A powerful, balanced Shiraz-Grenache blend.

Beautiful floral aromas of jasmine and honeysuckle set the stage for concentrated and spicy flavors of white peach, pecans, white strawberries, and white cardamom. The finish flashes with chamomile and rose water. Gewurztraminer and Sauvignon Blanc.

This Bordeaux-style blend of Cabernet Sauvignon, Merlot, Petit Verdot, and Cabernet Franc offers deep notes of brambly berries, currants, plums, chocolate ganache, black licorice, cedar, and cigar tobacco. It has time to age further, but it's too good not to pop the cork right away.

Rich and bright at the same time, with balsamic notes and something almost pine-like that lifts the cherries, mountain berries, and hint of flowers. On the palate, this has the texture of a Bourgogne Villages, with presence, breadth, and so much energy.

Like a beautifully ripe Toscana, this Sangiovese-Barbera blend emerges from the glass with pure cherries complicated by sweet spice and a hint of leather, all framed by serious mineral notes. The palate is vibrant and fresh, with a beam of cherries and wild strawberries layered with scrubby herbs, all turning to a finish that nods in the direction of violets and blueberries. From Safsufa, at the base of Mt. Meron.

Subtle and almost savory on the nose, with a palate bright with acidity and a hint of almond blossom, lemon pith, hard pear, and honey, all carried on a fantastic texture that coats the palate yet remains lively. Excellent weight against real energy.

A textbook expression of Carignan, with remarkable concentration to the brambly berries and scrubby herbs. The first sip reveals a velvet-textured wine that's evolving perfectly, with orange peel, dried apricots, currants, and balsamic flavors against a touch of chocolate and coffee oils. The spicy finish lingers for 45-plus seconds.

Peppery, savory aromas dance with black plums, hot rocks, and a touch of licorice root and root beer spice. The palate shows more fruit, with concentrated black cherries and a subtle hint of chocolate, but that lovely savory character is still there in the guise of peppercorns, dried thyme, bay leaf, lavender, and something almost meaty.

Exuberant, with gobs of blueberries, mixed mountain berries, and a slightly minty lift. These precede ripe, balanced flavors of black cherries, cracked black peppercorns, and a finish enlivened by perfectly calibrated acidity. Concentration and elegance mingle impeccably in each sip.

Ripe aromas of currants and crushed cherries are edged with subtle notes of chocolate, and precede a palate with excellent acidity that lends serious structure (alongside perfectly integrated and assertive tannins) to lengthy flavors of cranberries, tart cherries, blood oranges, and cocoa powder. This is clearly a mountain wine in its crunchy mineral character.

Getting toward the end of its evolution at this point—forest floor and freshly dug mushrooms are prominent—but black cherries, wild strawberries, plum cake, dates, and blueberry compote are sweetly spiced, generous, and delicious. Perfect with short ribs enrobed in Port-wine sauce.

Dusty tannins and well-calibrated acidity structure a blend of Petit Verdot, Cabernet Sauvignon, Shiraz, and Malbec that's far more savory than expected, with black peppercorns, lavender, sarsaparilla, licorice root, black cherries and pits, plums, figs, and a touch of Marmite, especially on the finish. With air, huckleberries and blueberries emerge, and they are generous and ripe, serving as foils for those more savory notes. 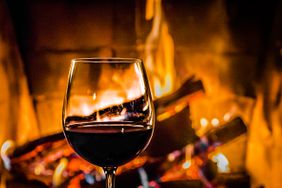 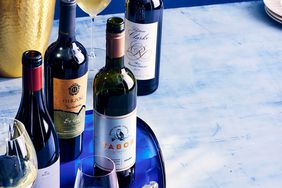 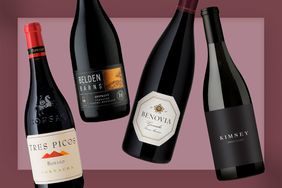 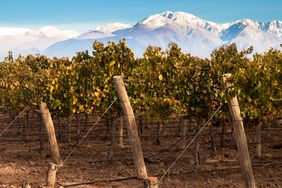 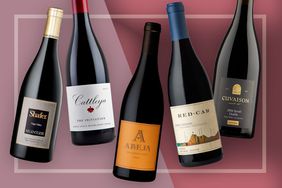 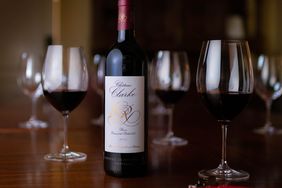 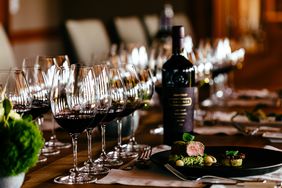 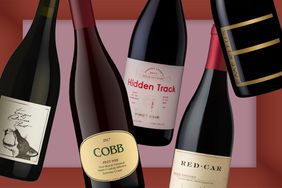 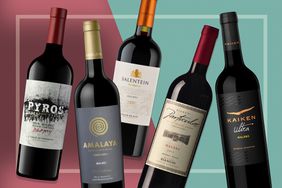