Turn to these four key wine-growing regions and the grapes that thrive there to drink in the best that South Africa has to offer.

A land of immense natural beauty and vinous variety, South Africa is a wine lover's dream. The picturesque panoramas of the Cape Winelands, many set against striking backdrops of rugged mountainous terrain and pristine ocean vistas, boast verdant hills graced with lush vineyard patchworks and abundant indigenous vegetation unique to this special biome. It is one of the most breathtaking wine-producing areas in the world, with the quality to match.

Home to around 238,000 acres of vineyards, mostly planted at the southern tip of the country in the Western Cape region, South Africa's winelands are currently composed of 30 diverse districts and 98 smaller wards. Additionally, the varieties planted throughout these areas are numerous, though prominent, successful cultivars can be identified for each appellation.

To help discover the best South African wine regions and which bottles to check out, we've compiled this cheat sheet for where to turn and what to try. Get ready to drink in the beauty this country has to offer.

Stellenbosch is perhaps the most well-known wine region of South Africa, and winemaking here dates back to the end of the 17th century. With nearly 30,000 acres of vines today, it is one of the largest wine-producing districts in the country, home to more than 150 wineries as well as many top wine education and research institutions, such as the South African Grape and Wine Research Institute and the department of viticulture and oenology at Stellenbosch University.

Stellenbosch's cool, wet winters and dry, hot summers are characteristic of a Mediterranean climate, and the district is heavily influenced by its mountainous surroundings, which include the Simonsberg, Stellenbosch, Helderberg and Jonkershoek mountains. Elevations range from roughly 490 to1,312 feet above sea level, and geographic contributions from these formations and geographic contributions from these formations as well as deposits from millions of years ago have resulted in a wide range of soils throughout the district — as many as 50 different types — including decomposed granite, sandstone or alluvial soils on clay bases.

These vast terroir differences can result in wines of varying expression depending on from where they were sourced; wines made using grapes from vines planted in more clay-heavy soils can exhibit greater concentration and structure than those planted in granite. It is with this in mind that subappellation-like wards, such as Banghoek, Bottelary, Jonkershoek Valley and Simonsberg-Stellenbosch, may offer a bit more consistency and typicity from one bottle to another, providing a deeper understanding of the unique characteristics to a subregion.

"Stellenbosch has many small terroir pockets; these pockets are very much variety driven," says Jaco Engelbrecht, viticulturist and founder/owner of Visual Viticulture. "The northern slopes of the Helderberg and Simonsberg are Cabernet Sauvignon, Cabernet Franc and Merlot, and on the whites, Chardonnay. The southern slopes of the Polkadraai area are Syrah country — close proximity to the ocean, granitic soils and, on the steep slopes, limited exposure to sunshine which translates to perfume, white pepper and elegance in the wines.

Given the diversity of the district, it's not surprising that many grape varieties thrive here. According to the Vines in the Wine of Origin Region 2021 report from SAWIS (SA Wine Industry Information and Systems), the most planted variety in Stellenbosch is Cabernet Sauvignon, with roughly 5,980 acres under vine, followed by Syrah/Shiraz (approximately 3,829 acres), Merlot (3,513 acres) and Pinotage (2,606 acres). For white wines, the most popular cultivar is Sauvignon Blanc, with approximately 3,913 acres planted, trailed closely by Chenin Blanc (3,164 acres) and Chardonnay (2,360 acres).

About 45 miles northeast of Cape Town lies Swartland, the indie darling of the South African wine scene. What was once largely known as the breadbasket of the Cape due to its bountiful grain production is today considered one of the hippest spots for winemaking thanks to high-quality expressions from skilled yet also supremely cool producers.

Markedly warmer and drier than Stellenbosch, the Swartland showcases a varied topography that boasts different soil compositions, elevations, and geographic influences. Vineyard sites can be found within the district's vast rolling hills alongside wheat fields and olive groves, as well as along the banks of the Berg River and up into the mountainsides of the ranges that are homed here, including the Paardeberg and Kasteelberg. The dominant soil composition is Malmesbury shale, though granite-heavy sites are also common on the mountain slopes.

Many Swartland producers focus on principles that speak to environmental respect and sustainability, including responsible agriculture and dry farming, minimal intervention winemaking, the preservation of old vines (older than 30 years old) and a willingness to work with a variety of cultivars, from the underappreciated to the obscure. The Swartland Independent Producers (SIP) group gives a platform to these common-ground guidelines that drive the bulk of the district's top talent and form the area's best expressions.

Currently, there are around 23,905 acres of vines planted in the Swartland. The most planted grape (by a landslide) is Chenin Blanc, with about 5,528 acres under vine. It'sby far the most established vinous calling card of the region, including numerous vineyard-designated bottlings from top producers such as Mullineux, A.A. Badenhorst and David & Nadia. You can't go wrong exploring any of the region's offerings, with their common citrus, green fruit and waxy melon tones showcased within a precise framework of bright acidity, delicate texture and length.

After Chenin Blanc, Shiraz, Cabernet Sauvignon and Pinotage round out the list of the district's most planted varieties, ranging from around 2,700 to 3,800 acres planted to each. But beyond those populous cultivars, there is a wide range farmed here, and many producers play with a vast array of both red and white grapes, especially traditional Rhône varieties such as Grenache (both red and white), Cinsault, Mourvèdre and Viognier.

About an hour southeast of Cape Town, this cool-climate, high-elevation district is like South Africa's secret vinous garden. Traditionally an apple-growing region, Elgin has proved that it has so much more to offer than just orchard fruit, despite (sadly) the greater profitability for apple farmers.

Elgin sits at elevations between 820 to1300 feet above sea level, nestled among the Hottentots Holland Mountains and tempered by a maritime influence from False Bay and the South Atlantic Ocean to the west. These factors contribute to moderated climactic conditions that make Elgin the coolest winegrowing region in South Africa, with breezes and fog that minimize intense heat as well as significant diurnal temperature shifts that foster a long, even-growing season and late ripening without over-maturation.

While small, with only about 1,834 acres of vineyards in total, the overall quality and unique expressions of the region's bottlings speak volumes. Elgin wines are exceptionally pure in fruit character, with a precision and focus that highlights the district's cool climate and often Table Mountain sandstone or Bokkeveld shale-dominant soils, though compositions vary throughout the district and can include gravel and clay as well.

The focus here is largely on aromatic varieties that typically thrive in cooler climates. Calling-card varieties for the district include earthy, classically styled Pinot Noir, of which approximately 286 acres are planted, as well as focused and well-balanced Chardonnay (322 acres), with crisp orchard and stone-fruit characteristics, as well as a bright seam of refreshing, citrusy acidity.

Other varieties that do well here include Syrah (around 141 acres planted), which produces wines that are typically more Old World in style with earthy and peppery tones atop tight-knit berry flavors as opposed to overly plush and fruit-forward New World selections, and citrusy and grassy Sauvignon Blanc (approximately 682 acres planted). Riesling has also found a favorable home here, though it's still somewhat of a specialty thanks to limited production from only around 64 acres planted.

About 60 miles southeast of Cape Town, this breathtaking maritime district features the area along its namesake, curving east along the Bay's shoreline from the seaside town of Hermanus. The oceanic influence here is unmistakable, as the region boasts one of the country's most tempered climates thanks to persistent cooling winds from the water. It also has a range of elevations that can climb upwards of 1,000 feet above sea level across a variety of terroirs and soils, predominantly weathered shale, granite and sandstone.

The Walker Bay district includes the iconic Hemel-en-Aarde (which means "Heaven and Earth" in Afrikaans) wards: Hemel-en-Aarde Valley, Upper Hemel-en-Aarde Valley and Hemel-en-Aarde Ridge. These appellations are known for yielding some of the country's best Chardonnays and Pinot Noirs that thrive in each area's unique terroir and cool-climate conditions. Of the 2,543 acres planted throughout the district, approximately 368 acres are planted to Pinot Noir and 309 to Chardonnay, largely within the Hemel-en-Aarde wards. These wines offer terroir-driven expressions of finesse and balance, with a pronounced purity of fruit, structural focus and superb natural acidity for a balanced package that is the stuff of Chard- and Pinot-lovers' dreams.

Beyond Hemel-en-Aarde's flagship varieties, the Walker Bay district is also capable of yielding elegant and focused styles of Sauvignon Blanc, Syrah, Chenin Blanc and Pinotage. Sauvignon Blanc is the district's most popular variety at around 645 acres of vines, with smaller amounts of Syrah (344 acres), Chenin Blanc (124 acres) and Pinotage (113 acres) planted throughout the region.

"Other wards worth noting include Bot River, which is further from the ocean and slightly warmer but lacks the searing heat of some of the other regions, and Sunday's Glen," says Cathy van Zyl, MW, a South Africa-based wine professional and writer. "In Bot River, Beaumont has an iconic Chenin Blanc–Hope Marguerite–and excellent Pinotage, while at Gabrielskloof, they produce several cool-climate Syrahs which are more at home in the slightly warmer, less windy vineyards than in the Hemel-en-Aarde. The latter ward nestles in a valley between the mountains close to Stanford and the Atlantic Ocean, and is producing exceptionally good Sauvignon Blanc, including those from Hermanuspietersfontein." 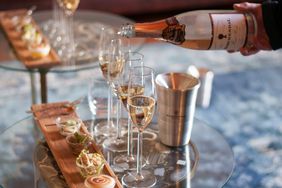 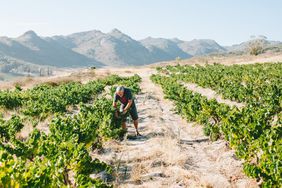 The Best Things to Do in South Africa's Swartland Wine Region