Duboeuf, who died at the age of 86, helped popularize the annual Beaujolais Nouveau celebration.

There are a handful of names in the world of wine that have broken through the barriers of the business and come to signify an entire region, or style or more elementally, the deeply felt joy that drinking it evokes. Georges Duboeuf, who passed away on January 4, at home in Romanèche-Thorins, managed to achieve all three—and then some.

His family had been tending vines and crafting wine in Burgundy’s Mâconnais for centuries, but it wasn’t until Georges joined the family business and began selling their white wines that he also began peddling (and pedaling: these sales trips were taken on his bicycle) the reds of nearby Beaujolais on the advice of customers like Paul Bocuse and the Troigros brothers. Through a combination of technical know-how, vision, and indefatigable passion for the region that his name became so inextricably linked to, he played an unparalleled role in spreading the gospel of Gamay around the world.

But it’s Beaujolais Nouveau that he is most famous for, the annual celebration, on the third Thursday of November, of the first red wine to be released from the region. It’s a tradition that dates back to the 19th century, but his efforts played a definitive role in making it the international celebration it is today, so much so that he was known as the “king of Beaujolais.” Over the years, Les Vins Georges Duboeuf has expanded their Beaujolais Nouveau offerings to include a rosé and a Beaujolais-Villages Nouveau (which was particularly lovely this past year, and is still drinking beautifully). Other producers and negociants have jumped into the ring as well, and each vintage, the range of styles and expressions of the region’s terroir seem to expand.

Two years ago, on a road trip with my wife and two young daughters, we spent a day with the Duboeuf team. We were taken around the various crus throughout the region, where many of the smaller producers have been able to get their wines a wider international audience through partnerships with Les Vins Georges Duboeuf. (The Duboeuf name, and its iconic flower-adorned labels, may be ubiquitous, but their efforts behind the scenes, with wines not obviously labeled as theirs, should not be overlooked).

Later on, working our way through a massive (and deliciously eye-opening) horizontal back at the winery, I had the opportunity to taste with Franck Duboeuf, CEO of Les Vins Georges Duboeuf, and to meet Georges himself. He may have been one of the most transformative figures in the history of the region, a giant in the industry whose impact on the world of French wine in general cannot be overestimated, but in person he was kind, thoughtful, and the very definition of a gentleman.

While we were tasting, my wife and kids spent a few hours at Le Hameau Georges Duboeuf, a wine-focused theme park and restaurant on the property that, through everything from a Lyonnais bistro to rides and immersive video showing a honeybee’s-eye-view of wine production, taught my kids more about what I do for a living than anything I’d told them before.

Which, it seems to me, is just as Georges likely wanted it. His tireless work both at home with Les Vins Georges Duboeuf and as an ambassador for his entire beloved region have introduced generations to the charm and pleasure inherent in Beaujolais, from the most casual glasses of Nouveau slung back with friends in mid-autumn to the kind of age-worthy Beaujolais Cru that is often such an unexpected discovery to the uninitiated.

At the end of our day at Duboeuf, as we were saying our mercis and au revoirs, his son Franck presented my kids with doudous—round, impossibly plush stuffed companions that each of them still sleeps with, even two years later. They often ask me if I remember the day they got them, and then proceed to tell me, for the thousandth time, about the amazing wine adventure they had that afternoon.

I have to imagine that Georges Duboeuf would have been proud: Here is yet another generation that his and his family’s kindness, vision, and ambition has introduced to the magic of wine. What a wonderful legacy to leave. 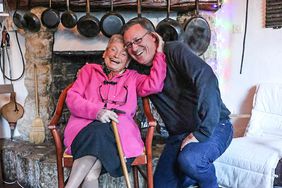