5 Rioja Wines You Should Be Drinking Now

Here are five gorgeous wines that represent the best of Rioja, Spain.

With their dusty spice notes and elegant cherry-scented fruit, the wines of Rioja are the essence of Spain. Here, in the country's most famous wine region, the Tempranillo grape is king. Most Riojas are blends from dozens of vineyards (there are over 15,000 grape growers here, but only 640 wineries). They're also defined by how long they've been aged, from younger crianzas (aged two years, with at least six months in oak barrels) giving way to older reservas and gran reservas.

2013 Finca Nueva Crianza ($20) Under his Finca Allende label, winemaker Miguel Ángel de Gregorio makes some of Rioja's most sought-after (and pricey) wines. His Finca Nueva wines are more affordable, but no less finely made—this crianza, overflowing with gorgeous cassis fruit, is a steal for the price.

2008 La Rioja Alta Viña Ardanza Reserva ($35) This release marks the 75th anniversary of the benchmark bottling. If you want to experience traditional Rioja at its best, full of the classic cherry-vanilla interplay of ripe Tempranillo and American oak, this is the wine to seek out.

2010 Remelluri Reserva ($43) This beautiful, remote estate, in the foothills of the Sierra de Cantabria mountains, makes—thanks to gifted proprietor/winemaker Telmo Rodríguez—some of the region's most ambitious wines. Organic farming and uncompromising winemaking are the investment. The payoff? Wines like this powerful reserva, with its deep raspberry fruit and herbal-minty aromas.

2008 R. López de Heredia Viña Cubillo Crianza ($45) Under sisters María José and Mercedes López de Heredia, this historic bodega proudly continues in its ultra-traditional approach, eschewing modern technology and releasing its wines after years (or even decades) of aging. The 2008 vintage is the current release of this subtle, aromatic bottling.

2011 Contino Reserva ($52) Rioja may have only just officially approved the idea of single-vineyard wines, but Contino led the way, having produced its single-estate wine since 1974. This bodega further benefits from the talents of longtime winemaker Jesús Madrazo. Its polished 2010 Reserva, from a spectacular Rioja vintage, has decades of life ahead of it. 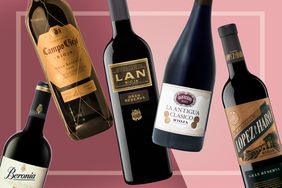