The Truth About Pairing Wine with Red Meat

We asked the experts to tell us everything they know about red meat and red wine.

We've all heard the adage that you should pair red wine with red meat. But there is some evidence that it's less about the meat itself and more about one crucial seasoning—salt. The debate often finds wine professionals lumped into one of three camps: the no-salters, the salters, and those who suggest it's all about the cooking. So, I set out to uncover the truth about why pairing red wine with red meat is a great thing.

I'm smart enough to recognize that a degree in Drama Studies limits my ability to lend a scientific mindset to this important topic. So, I turned to three experts for their expert advice. Master of Wine Nicolas Quillé, the Chief Winemaking and Operations Officer for Crimson Wine Group, says that the association of red meat and red wine makes sense because of the high protein content of meat. "Red wine is rich in tannins that are reactive to proteins (the dry feeling in our mouth results from the binding of lubricating salivary proteins with tannins), so red meat makes the wine less tannic, and the tannins make the meat less rich."

Tim Hanni, one of the first two Americans to earn the Master of Wine credential and author of Why You Like the Wines You Like, is an outspoken critic who thinks food and wine pairing is mostly BS. "The idea that the 'fats and protein in the meat will smooth out the wine' is an easily disproved myth backed up by pseudo-science," he says. "The fat and protein make a red wine seem more bitter and astringent, and it is the salt that you put on a steak (salt suppresses bitterness in general) that makes the red wine seem smoother."

Great. Now, all I can hear is a tiny devilish Gordon Ramsay shouting in one ear, "Needs more salt!" while an angelic Jamie Oliver whispers in the other, "just a pinch, mi amici."

Master Sommelier David Glancy, the Founder and Chief Executive Officer of the San Francisco Wine School, doesn't have hard and fast rules about pairing red wine and meat. He says it's "more about the sauce, seasonings, cooking method, and accompaniments."

Glancy suggests finding ways to match the overall intensity with any food and wine pairing. "An assertively flavored red meat dish would get a powerful red wine, and delicate red meat like Veal Marsala or Veal Piccata might even get a white wine." As far as the great salt debate is concerned, salt "generally lowers tannin impressions in wine so I would consider a dry, tannic red with a well-salted cut of meat," Glancy says.

Even if the jury is out on pairing red wine and red meat, leave it to Hanni to nail the right pun: "Take wine and food 'matching' with a 'grain of salt,'" he says. "The full saying is 'take the bitter pill with a grain of salt,' demonstrating that our elders knew how to use salt to suppress the bitterness—and it will work with your steak and other foods as well."

Here are eight reds and suggested pairings, plus more wisdom from a bevy of wine pros.

Remember Tim Hanni's point about adding salt to suppress bitterness? Nicolas Quillé counters Hanni, suggesting that "salt is not necessary" to enjoy red wine with red meat. "Salt is a 'sapidity' agent," he says, "which means that it enhances the taste and aromas of food. It works on the meat, and it works on the wine as well." Even though Quillé argues that the interaction of meat proteins and red wine tannins effectively creates the perception that the red wine is less tannic, he admits to having an affinity for adding salt. "I like to add coarse salt right before eating, and I have a strong bias for French fleur de sel."

Salt or no salt, the Seven Hills Merlot from Washington State comes from some of the oldest vines in Walla Walla and harbors the "concentration," says Quillé, "to stand up well to spicy meat." He suggests pairing a rack of beef ribs with a spicy barbecue sauce and grilled potatoes.

"Salt can provide a fun contrast with fruitier reds, like salting a melon," says David Glancy MS. "There are guiding principles, but you don't know for sure until you taste the food and wine together."

The Brown Estate Zin comes in a robust package, teeming with dark black fruits and intense floral aromas while the palate is rich in candied red fruits, bramble spices, and soft, refined tannins. Glancy likes to make a Zinfandel reduction with a glass of this wine. He suggests topping pan-seared or grilled red meat cuts with any blue cheese compound butter like Maytag, Gorgonzola, or Roquefort, which work well with any "big, fruit-forward red, even Italian Amarone," he says. The trick to a perfect pairing lies in matching the cheeses' salt level to create balanced harmony.

Timm Crull, winemaker and proprietor of The Terraces, says it's all about the cut of beef, "and if it's aged and how the steak is cooked." Crull prefers a red with some age, "maybe three to ten-years-old when the tannins are more integrated. I am not a big fan of overly fruity wine with aged beef." He recommends salting liberally with Diamond Crystal kosher salt, 24 hours in advance, and finishing with Maldon flakes. "I think the four most important things when preparing a great steak are salt early, a thermapen, the smoke of real wood (I use barrel staves), and letting the cooked steak rest for plenty of time."

The Terraces 2016 Cabernet Franc practically demands an exceptional cut, like a dry-aged bone-in ribeye from an excellent butcher like Flannery Beef. The tannins are beautifully integrated, and the fruit flavors don't overpower the beef flavor. Black cherry, boysenberry, violets with hints of earthiness and cedar—all conspire to bring out the earthy beef flavor of the aged steak.

Once in a while, a Pinot Noir comes along that is built a bit more like a Cabernet Sauvignon. This Barrel 16 is that Pinot—remarkably full-bodied, with silky, seductive dark fruit, ample spices, and a finish that goes on for days and days; it is a luxury-tier porch-pounder that demands a juicy burger hot off the grill. Alternatively, any red meat pairing in the Bubble Room at J Vineyards in Sonoma by Chef Carl Shelton (an alum of Michelin 3-star The Restaurant at Meadowood), paired with this Barrel 16 Pinot is worth a trip to California alone. The in-your-mouth marriage of really any red meat and this wine is so good; every bite is sheer joy.

Snoop Dogg says, "My smooth 19 Crimes Cali Red is meant to be sipped slow, making it a perfect pairing for throwing some slow-cooked ribs on the grill." With a brown sugar rub, he says it "deliciously complements the vanilla and chocolate notes" in his red blend. Snoop partnered with Treasury Wine Estates to make his wine, and has donated $100,000 to the NAACP Legal Defense and Educational Fund in response to the race protests that have erupted around the United States.

With Petite Sirah, Zinfandel, and Merlot from Lodi, 19 Crimes is imminently rich and luscious, with loads of violets, vanilla, smoky-toasty oak, and plenty of sweet tannins, which calls for, as Snoop suggests, "Grill blazing, glasses up!"

No article on pairing wine and red meat is complete without a pairing for the Tuscan classic Bistecca alla Fiorentina—a rare Porterhouse steak, modestly salted, and traditionally served with lemon as a garnish. This dish calls for a dense, extracted Zinfandel with plenty of tannic strength and a bit of Italian flair like this Seghesio Family Montafi Zinfandel culled from Russian River Valley vines planted in 1926 by Italian immigrant Benito Montafi.

It's also a dish that inspired Tim Hanni's "great trick." Try it yourself. Pour a glass of wine and take a sip. Then take a tiny lick of salt and lemon, and try the wine again. "This combination of flavors will make red wine taste less bitter or astringent," he says, "while white wines will become rich and smooth, and sweet wine will become a bit sweeter."

"This wine has enough tannin to help break down the fat in a nice ribeye and fantastic acidity to cleanse the palate," says Josh Kretchmer, General Manager for Arrow & Branch. Kretchmer considers himself a traditionalist with steak. When it comes to pairing red wine, he says generous salt and a dash of pepper toward the end of the cooking is all you need. "I love rubs, but with a big Napa Cabernet, I don't want anything to come between the wine and the meat. I love Kosher salt to season, and then I finish with a pinch of flaky sea salt like Maldon.

"Ultimately, if you pair your favorite red wine with your favorite cut of meat, I think you're not going to be disappointed," says Kelly Fleming winemaker Becky George. Given that Kelly Fleming was a co-founder of Fleming's Steakhouse before settling in Napa Valley, her wines practically qualify as the quintessential pairing for red meat.

This rich, bold wine possesses excellent tension, with young, firm tannins, which George says would well "with a fattier cut of steak like a filet, ribeye, or t-bone." She says older vintages are better suited to sirloin steak or a roast because of their softened tannins. 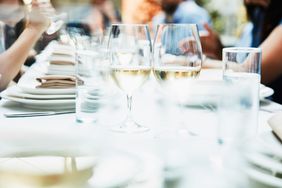 A Case for Pairing White Wine with Beef