It's worth spending more on these premium sparklers.

Until recently, seeing a bottle of Prosecco that cost more than $20 was a rare thing. For around $15, you could get a very nice one that was fruity, floral and refreshing. And you still can. But now producers from northern Italy are bringing to America a higher class of premium Proseccos, ones which are more complex, more sophisticated and more satisfying. And while Prosecco producers do not like to compare their wines with Champagne—the styles are basically different—some of these premium Proseccos nevertheless come with Champagne-worthy price tags attached.

Prosecco is made primarily from the Glera grape within a hilly region that fans out north of Venice. The two most famous Prosecco appellations are located due north of that watery city—Conegliano Valdobbiadene and Asolo—and both carry Italy's highest appellation rating, DOCG. Conegliano Valdobbiadene, named after two neighboring hillside towns, is the better known of the two and the larger producer and exporter. Within its DOCG, the most highly prized wines are grown on hillsides, or "rives." Rives grapes are always hand-picked, their yields are lower and they usually carry a vintage designation—although you may have to search the back label with a magnifier to discover it. The most famous of these rives is Cartizze, which covers about 265 hilltop and hillside acres. According to Stefano Zanette, president of the Prosecco DOC consortium, studies are now underway to map out Prosecco production areas according to soil type and climate. Many wine producers hope this process will eventually lead to a hierarchy of best vineyards or "crus," as is the case in many French wine regions.

Unlike Champagne, most Prosecco is made in tanks, not in bottles, which is more economical. Prosecco comes not only in varying degrees of sweetness or dryness, but also in different degrees of effervescence or "bubbliness."

Here are seven that represent the crème de la crèmant of the Valdobbiadene Proseccos, from $20 up to $45.

Mionetto has been making wine for 130 years in Valdobiaddene, the small village with the tongue-twister name. This brut, from the Rive de Santo Stephano vineyards, is quite fresh, with green citrus flavors and a lemony finish.

"Crede" is the name for a vineyard's sandstone soils, as this region was once part of ancient seabed. This blend of Glera, Verdiso and Pinot Bianco grapes has rich flavors of dried apples and apricots blended with stony minerality.

In 1920, the Adami family was the first to market a vineyard-specific Prosecco and won regional prizes for it. Grapes from the Giardino vineyard in the Rive di Colbertaldo give this wine floral aromas and flavors of honeycomb and roasted nuts.

Not many years ago, Prosecco was seldom seen outside northern Italy, and Nino Franco was one of the first to introduce it to the international market as an alternative to Champagne. The Primo Franco bottling is rich and deep with some fruity sweetness and whispers of vanilla.

Each winter, Ruggeri selects 2,000 vines from throughout the region that are 80 to 100 years old and makes wine from these "vecchie viti"—old vines—the following autumn. The result is a rich, intense blend of fruity and dried savory flavors with hints of tannins.

Cartizze is considered to be the grand cru of Prosecco—a lovely hilltop vineyard just outside of Valdobbiadene that is divided among many owners. The Rebuli is full on the palate with flavors of mellow apples and fresh orange.

Italy's iconic Gambero Rosso guide gives this wine its highest rating of "Tre Biccheri" or three glasses. Vigna la Rivetta is in the heart of Cartizze, and the resulting wine is almost Champagne-like with its mellow fruits, great structure and fine minerality. 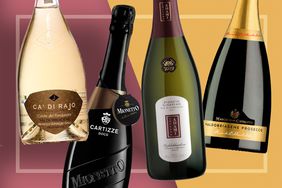