Avoiding shattered glass and wasted liquid gold is easier than you think.

In the age of Instagram and TikTok, content-savvy epicureans love a bit of showmanship. It is, after all, some diner who captured a glorified butcher's sprinkle of salt atop some nimbly sliced steak that created the personality we now all know as "Salt Bae."

For sommeliers and bartenders, the art of sabrage — i.e using a saber, knife or, in some cases, the base of a champagne flute to forcefully open a bottle of bubbly — has become a foolproof extravagant display to captivate their guests with an Instagrammable moment. And while home enthusiasts who accidentally smash bottles of champagne trying to saber them with improper technique is entertaining comedy, the elegance of the traditional sabrage cannot be overstated. For some pro-tips on how to safely and effectively saber a bottle of champagne, we've tapped head butler Eugene Ball of the St. Regis Bermuda Resort, which is famous for its evening sabrage ritual as the sun sets each day.

"The origins of sabrage actually date back to the battles of Napoleon Bonaparte during the French Revolution," says Ball. "As the most famous version of the story goes, Bonaparte, after one of his war battles said, 'In victory you deserve it…and in defeat you need it.' He was talking about champagne, of course. He then proceeded to strike a bottle of champagne with his saber to open it, and thus the ritual was born."

Ball's origin story is undoubtedly the most popular, but it's not the only one (as is often the case with booze-tinged tales). Another legend of sabrage's origin credits Napoleon's cavalry officers, who celebrated some great victory by striking open a bottle of champagne while on horseback. Since the soldiers kept one hand on the reins, uncorking a bottle of bubbly proved to be a tedious task, so they used a swift swipe of their sabers to open bottles

The other variation of the legend of sabrage goes that the widow Clicquot — as in Veuve Clicquot — would give Napoleon's soldiers champagne and glasses as payment for protecting her land. Similar to the aforementioned tale, since the soldiers were mounted on horseback with little ability to properly unwrap, dewire, and uncork the bottles, they'd use their sabers instead.

Regardless of which version of the story is true, what we do know for sure is that this famous act proliferated throughout drink culture to eventually became an iconic evening ritual at St. Regis hotels around the world. "At the St. Regis, the art of sabrage signifies the transition from day to night, celebrating the day's achievements," says Ball. It's a tradition that was started by John Jacob Astor IV when he opened the first St. Regis in New York in the early 1900s. From that moment forward, sabrage became as associated with the St. Regis brand as Napoleon himself.

How to Saber a Bottle of Champagne

Per the many viral videos of bottles smashing to pieces while drinkers try to strike them open, sabering sparkling wine is a touch more difficult than it may seem. The temperature of the bottle is critical, but so is the type of bubbly –– wines like Champagne, that are made in the traditional method, are best for sabering because they receive dosage and go through a secondary fermentation in the bottle. This means they have more pressure than, say, Prosecco. It's also important to pay attention to the sabering tool, like a knife, saber, or even the base of a champagne flute.

"Before doing anything, you must make sure that the bottle is extremely cold," says Ball. "My personal favorite is Veuve Clicquot, as it's most famous for sabering and gives a perfect cut and pop every time. The bottle should be chilled for 24 hours to somewhere between 45°F to 48°F (or 7°C to 8°C). The colder the bottle is, the more brittle the glass will be." For impromptu celebrations, adding the champagne to a bucket of ice, cold water, and roughly half a cup of salt for approximately 30 minutes will help the bottle achieve the ideal temperature.

"After the bottle is properly chilled, flip it cork-side down in ice cold water 30 minutes before you're planning to saber it, in order to create more pressure — this will give it a cleaner cut," Ball says. "Once you've done that, remove the foil and cage — or loosen it and adjust it to sip just above the lip of the bottle — to make sure you're striking the bottle and not the metal, which can absorb the impact [and cause the bottle to break rather than neatly open]."

Once the bottle is ready, it's time to choose your battle weapon. "Here at the St. Regis Bermuda, we use Fox Knives to saber our champagnes," Ball says. "Some people at home use kitchen knives or the base of a champagne flute — all you really need is something that will generate enough force, and is strong enough." While the latter may very well get the job done, the saber is the glitziest and most nostalgic option, so it's worth the splurge for a special occasion.

To saber the champagne, Ball says to hold the bottle at a 45 degree angle and guide the blade along the seam. Before going for it straightaway, it's best to give yourself a couple practice strokes, slowly gliding the blade back and forth to line up your strike. "When you're ready, strike with force and follow through with your saber to open the bottle," he explains. "The most important thing is not to hesitate and hack at the bottle. Always glide the blade along the seam and, when in company, never point the bottle towards another person]."

The art of sabrage is far from a humble or subtle act, so be sure to embrace the grandiosity of the occasion and strike with authority and a smile. "Don't forget, confidence is key," Ball says. 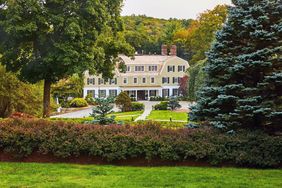