Even though tasting 187 under-$20 italian wines can be exhausting, I found the task entirely enjoyable. First, the world of Italian wine is so vast and varied right now that I was automatically assured of running into a host of surprises, and pleasant surprises at that. Second, I could haul the unfinished bottles of the best wines home after the tasting, bring them up to the roof deck of my Brooklyn apartment building, and serve them to my friends Filippo, Lorena, Max and Barbara. There’s nothing like serving good Italian wine to a quartet of Milanese expats to make you a hero.

A few useful things to know: Most Italian wines are labeled by region rather than grape variety, something typical of Europe in general (the exception is wines in the $10-and-under zone, more and more of which are now varietally labeled). And, much as France has its appellation d’ origine contrôlée (AOC) designations, Italy has DOC (denominazione di origine controllata) and DOCG (the same, with e garantita—guaranteed—added). Both signify a wine made from specific types of grapes from a legally defined place—Chianti, for instance, or Barolo; the DOCG designation is reserved for regions that historically have produced extraordinarily good wines.

Italian reds tend to be higher in acidity than American wines, which means that they’re more difficult to drink on their own but terrific with food (for instance, some prosciutto and Parmigiano-Reggiano on a roof deck in Brooklyn). Italy’s whites are food-friendly, too, particularly the aromatic, minerally wines of northern Italian regions such as Friuli and Alto Adige. Generally speaking, if you like ripe, fruity, softer wines—red or white—look to the south (Campania is a good example, or Sicily). If you like elegant, more structured, aromatic wines, look to the north (Piedmont, say).

2005 Formentini Pinot Grigio ($16) This wine, made by the oldest producer in the Collio region (which lies along Italy’s Slovenian border, in the northeast of the country), is richer and more substantial than most Pinot Grigios.

2005 J. Hofstätter Pinot Bianco ($18) Vineyards on the cool hillsides of the Alto Adige region produce the grapes for this peach- and nectarine-scented white. The winery itself is located in a grand 16th-century building that once housed Austrian imperial post coaches.

2006 Maculan Pino & Toi ($12) Based in Breganze, at the foot of the Italian Alps, the Maculan family has become known over three generations for impressive wines at all price levels. This wildly floral, affordable blend of Tocai, Pinot Bianco and Pinot Grigio is one of their mainstays.

2005 Allegrini Soave ($14) Allegrini is primarily known for its powerful, long-aging Amarones, but this Soave, only the third vintage produced, shows that the Allegrini family has talent with white wines as well. The scent recalls lilacs; the flavor, green apples and citrus zest.

2006 Cavalchina Bardolino ($14) The Bardolino DOC is known for its light-bodied, refreshing red wine, typically a blend of the local grape varieties Corvina, Rondinella, Molinara and Negrara. Cavalchina’s bottling (which leaves Negrara out of its blend) is delicate and berry-scented, almost like an Italian version of Beaujolais.

2006 Ceretto Blangé Arneis ($18) Floral and light, with a flavor recalling oranges and a just-this-side-of-spritzy texture, Ceretto’s bottling is a textbook rendition of Arneis, Piedmont’s most appealing white grape variety.

2005 Capezzana Conti Contini Sangiovese ($10) This deep-purple Sangiovese, loaded with blackberry fruit, offers remarkable substance for its price—no surprise, given that it’s made by Capezzana, one of Tuscany’s top estates, whose vineyards have produced wine for the last 12 centuries.

2005 Gualdo del Re Eliseo Bianco ($16) Gualdo del Re’s family-owned winery, on a section of the Tuscan coast that’s filled with Etruscan ruins, lies in the tiny Val di Cornia DOC. This blend of Trebbiano Toscano, Malvasia and Clairette is bright and fresh, full of green-apple and spice-drop notes.

2004 Castello di Gabbiano Chianti Classico Riserva ($17) This estate south of Florence has been making wine since the 12th century and is now one of the best-known names in Chianti—in part thanks to wines like this one, which has the scent of tea leaves and ripe fruit that recalls cherry liqueur.

2005 Fattoria le Pupille Morellino di Scansano ($19) Morellino di Scansano, a DOC in the south of Tuscany, has been known for Sangiovese-based red wines since the 1800s. Le Pupille is one of the region’s stars—which is easy to understand, given the appeal of this lush, raspberry-scented red.

2004 Illuminati Riparosso ($14) This velvety, full-bodied red comes from the largest privately owned winery in Abruzzo—a region that’s been known for its wines since Hannibal defeated the Romans there in 217 BC.

2006 Terredora DiPaolo Falanghina ($15) Campania’s largest vineyard owner—farming almost 300 acres—Terredora specializes in the indigenous grapes of the region, among them Falanghina, which produces aromatic, luscious, pear-flavored wines like this one.

2005 Mastroberardino Lacryma Christi del Vesuvio Bianco ($18) Lacryma Christi ("tears of Christ”) is made from the Coda di Volpe ("tail of the fox”) grape variety—the latter so named because of its long, slender grape bunches. This bottling offers citrusy fruit and a stony finish.

2004 Librandi Cirò Rosso ($10) The Gaglioppo grape variety is obscure virtually everywhere in the world except the southern Italian region of Calabria, where it’s the principal grape in most of the region’s red wines. This pale, smoky red, with its flavor and scent of sweet dried cherries, is a fine example.

2005 Promessa Rosso Salento ($10) The main red grape of Apulia—and the main grape in this wine—is Negroamaro, whose name means “black bitter.” But its plummy fruit actually tends to be rather sweet, thanks to the Mediterranean sun’s warmth. 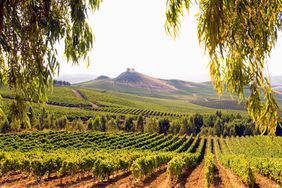