One of the best cheesemakers in Tuscany has opened his scenic cheese production farm to guests, offering a glimpse into the region’s rich Sardinian influence.

Some of the most famous food products of Tuscany are cured meats like salame Toscano, finocchiona, and other rich antipasto staples that transform less desirable pork cuts into something quite magical – a nod to the region’s history of “cucina povera.” The region’s cheese history is just as rich, and one spectacular organic cheese reflects an undersung aspect of Tuscan gastronomy: the influence of Sardinia.

How did amazing Sardinian-made pecorino end up in Tuscany? Sardinia, a small island off the western coast of Italy, has a centuries-old history of sheep’s milk cheesemaking, with dense, sheep-covered mountains in the island’s center. After World War II, when parts of Tuscany lost much of its population to industry-rich cities, leaving hundreds of acres of land abandoned, Sardinian farm workers and shepherds migrated to the region to work the land in the ways they knew how. One family-run organic cheese producer, Caseificio Più, is keeping the legacy of Sardinian cheese and shepherding alive in Tuscany’s Val D’Orcia, and you can actually tour the production facility in the scenic, hilly countryside, right outside the historic town of Sarteano.

The intensely passionate Giacarlo Più wakes up at 4:30 a.m. every morning to tend to the sheep. Housed separately, there are the pecora Sarda, sheep indigenous to Sardinia known for their high milk volume and rich milk (Giancarlo proudly referred to them as “very rustic animals”), and also a French breed for producing milk in the other months. “We produce milk 365 days a year,” he said. “We’re one of the few cheese production farms who does everything.”

RELATED: A Once-Abandoned Tuscan Village Is Now a Breathtaking Hotel with a Cooking School


He spends the remainder of the day making cheese, hosting tours and tastings, and keeping the whole operation afloat. Più, who was born in the Nuoro province of Sardinia, moved with his brother, Antonio, to take over the caseificio (or cheese production), which was founded by their uncles (also Sardinian immigrants to Tuscany) over 50 years ago. Their Pecorinco di Sarteano has since earned national recognition for its exacting quality and traceability.

“Sardinians came here in the ‘50s and ‘60s and began to re-valorize the land,” Giancarlo told me on a recent visit to Caseificio Più, which started with a tour and ended with the greatest cheese tasting of my life. He looked out at the rolling, golden hills of the now UNESCO-protected landscape, which has been preserved, in part, due to Sardinian farm labor. “To go forward, we must look to the past,” he mused. “When you respect nature, we all benefit.”


One of the many benefits of respecting nature, including the sheep Giancarlo works with? This cheese. Because education and advocacy is such an important part of his work, he opens the caseificio to tours, tastings, and cheese-making demos – my experience was arranged through Monteverdi Tuscany, a hotel just a few kilometers away that collaborates closely with Giancarlo. On my visit, I was joined by Monteverdi’s executive chef and good friend of Giancarlo, Giancarla Bodoni. (Her next restaurant at Monteverdi, called Zita, will shine a light on Sardinia's culinary influence in Tuscany when it opens in 2023.)

All of Caseificio Più's cheeses are marvels of terroir that show off this place's very special sheep, landscape, and point of view: from the grassy, melty ricotta to the brilliantly nutty and buttery Riserva pecorino, aged to perfection. In the cheesemaking tutorial, Giancarlo demonstrated how the exact same milk can make a wide variety of cheeses with beautifully diverse textures flavor profiles, all thanks to technique, length of aging, and old-fashioned chemistry.

“To make cheese is easy,” Giancarlo said. “To make good cheese is quite complicated.” 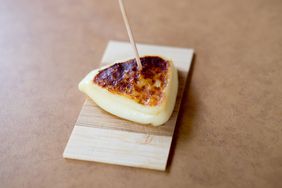