Australia's largest state is one of the planet's 36 biodiversity hotspots and home to the famed Margaret River wine region.

My companions were still asleep as I walked, eyes trained on the roads that separated blocks of the dew-studded vineyard at Ampersand Estates in Peerabeelup, Western Australia (WA). I'd awakened to the rushing of the Donnelly River and an unusual drumming sound, and quickly donned my sneakers to investigate. A three-toed, dinosaur-like print in the ruddy clay confirmed my hunch: wild emus called this place home, just like the western gray kangaroos we'd glimpsed hopping through the vines the evening before.

WA, Australia's largest state and one of the planet's 36 biodiversity hotspots, has a fanciful mix of 2,000-plus endemic plant and animal species. It's also home to the country's best-known wine region, Margaret River, where storied producers like Vasse Felix and Cullen hold court.

While Margaret River has superb terrain for growing grapes, it's not suitable for most grains and vegetables. The Pemberton area, about three and a half hours south of Perth in WA's Southern Forest, represents a unique juxtaposition. "In the hills of the Karri forest, where our vineyard is, it's perfect for grapes," said Ampersand cofounder Melissa Bell. "Further inland, down into the valleys, it's the most sensational, fertile produce-growing area in the whole world. If God had designed a place to have a distillery, it would be Pemberton."

Bell, a military brat who lived all over the globe before settling in Perth, met business partner Corrie Scheepers, a South African expat, in the pressure-cooker world of management consulting. Eager for a new chapter focused on joyful experiences, in 2020 they purchased the 40-year-old Donnelly River Wines property. The vineyard, which sits between two state forests, had closed three years prior. The team embarked on a year's worth of renovations.

In December 2021, it reopened as a winery-distillery with rustic-chic event spaces and accommodations. As for its new name, Scheepers explained, "We believe life is better with an 'and,' not an 'or,' not a 'but,' not a 'however.' Why can't people come to Ampersand and experience luxury accommodation, a cellar door with wines and vodkas and gins, and friends and families and weddings and picnics?"

Starting at $180 per person per night, groups can rent Ampersand's cozy, luxuriously appointed cottages and farmsteads, and indulge in customized culinary experiences. My stay included beverage tastings, plus a bespoke picnic in the barn, complete with local cheeses, charcuterie, and jams.

Ampersand Estates wines—primarily cool-climate varietals like Pinot Noir, Shiraz, and Chenin Blanc—are straightforward and approachable. This "wines for drinking, not thinking" approach, as Scheepers puts it, was partly a desire to release bottles more quickly, and partly to inspire guests to enjoy the moment.

The plummy Shiraz with a hint of allspice is a standout. "We're not creating the heavy, deep Barossa Shirazes Australians are famous for," Scheepers said. "I think it shows a little more of who Melissa and I are. We love to go through life a little bit lighter."

Sister brand Rainfall Distillery crafts single-harvest gin and vodka made from a base spirit of locally grown potatoes, plus native botanicals, spices, and Australian rainwater. The latter is harvested via a gutter-and-tank system prevalent in the Southern Forest. "You're getting the purest water," Bell said. "It makes a huge difference in our spirit."

Capitalizing on Australians' fondness for gin, Rainfall produces four vapor-distilled spirits rooted in local terroir and native botanicals. These include a pink gin infused with macerated local cherries, and a whiskey-like, ruby-colored smoked port, made by smoking Ampersand Estate's fortified wine three times with karri bark, then blending it with the gin. The newest is a love letter to Pemberton's strongest grape varietal, Pinot Noir, and blends the vineyard's young wines with the spirit.

For Rainfall's three vodkas, Bell wanted to evoke the quality of the hand-crafted, potato-based spirits she experienced during her time as a Peace Corps volunteer in Ukraine. In addition to a velvety plain vodka, Rainfall makes a dry London style infused with Southern Forest citrus and spices like star anise, cardamom, and wattleseed. The third, and perhaps the most special, is infused with local macadamia nuts roasted in honey from the blossoms of the karri tree, which blooms every seven to twenty years.

Ampersand's wines sell for $20 and $28 per bottle; the gins and vodkas run $72. "The price is associated with purpose," Scheepers said. "Every time somebody buys a bottle of our vodka or gin, it's going toward the local potato farmer, the karri honey farmer, the macadamia farmer. For us, the price is an investment in them."

Bell and Scheepers expect to export their products to international markets soon. The goal is to bring Ampersand Estates' "linger longer" philosophy to anywhere in the world.

On the final day of my visit, I walked to the edge of the vineyard to snap a wide shot of the evening sun liquefying into a wash of gold and tangerine. At a rustling in the bushes, I looked over my shoulder to find a female kangaroo, at least five feet tall, lazily working a clump of leaves in her jaws. Beside her, a tiny, slate-furred doppelgänger lounged in the grass, watching me with curious, unblinking brown eyes. I raised an imaginary glass in salute, coexisting with these beautiful creatures in an extraordinary place, and wishing I could stay just a little longer. 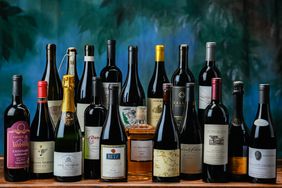