This Tennessee Distillery Is the Most Visited in the World

Ole Smoky is far from America’s best-known distillery; that title would probably go to an older, more iconic name like Jack Daniel’s. But the Tennessee distiller has made a name for itself as “the number one selling moonshine brand in the world,” offering its wares in visually appealing mason jars. And beyond their moonshine cred, the company says they can lay claim to another title, too: the world’s most visited distilleries.

Today, the Gatlinburg-based company announced they were “once again the most visited distilleries in the world [having] welcomed 4.5 million visitors in 2019, up from last year’s 4.1 million.” The word “distilleries” is plural on purpose. The company has four properties in Tennessee: The Holler and The Barrelhouse in Gatlinburg, which they say hosted 2.1 million and nearly 1.1 million visitors respectively, The Barn in Pigeon Forge which had 1.1 million guests, and 6th & Peabody in Nashville, “which opened last fall, welcomed over 200,000 visitors.”

The brand hammered home how impressive these numbers are by stating that they entertained “more than twice as many guests as all of Scotland's distilleries combined.” They added, “According to the Scotch Whisky Association (SWA), Scotland's 68 whiskey distilleries saw 2 million visitors in 2018.” And going back to Jack Daniel’s, their website says, “Every year about 280,000 people tour the distillery and visit the small town of Lynchburg," proving that name recognition isn’t everything.

“2019 was a growth year for our brand and our distilleries,” Robert Hall, the company’s CEO said in the announcement. “We continue to introduce innovative and appetizing new products and opened an impressive 30,000-square-foot entertainment complex and distillery in the heart of Music City, Nashville. Now with four locations, we provided memorable ‘see it made’ distillery experiences to 4.5 million visitors last year. From the quality and variety of our moonshine and whiskey products, to our attractive merchandise and live music, distillery tastings and tours, our visitors experience the full spectrum of our Ole Smoky brand.” 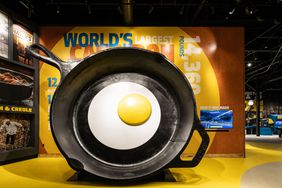