It's no secret that Paris is full of spectacular places to dine. As much as we love exploring new-to-the-scene Paris restaurants, sometimes traditional French comfort food is exactly what the doctor ordered, and where better to get your fill than at one of the city's most classic establishments? We've put together a list of the most iconic places to eat in the City of Lights. Don't worry if you can't hit all of these Paris restaurants in one visit; keep this gallery handy for upcoming jaunts over the pond. Because as Audrey Hepburn famously said: Paris is always a good idea.

One of the oldest restaurants in Paris, La Tour d'Argent's roots date back to 1582, when it first operated as an inn. Over the centuries, the restaurant became a favorite of nobles, royals, and wealthy individuals alike. Although the meal will still cost you, the experience promises to be unforgettable. Best known for its stunning views of Notre Dame and Ile Saint-Louis (as well as its Bible-like wine list), this classic French favorite overseen by Michelin-star chef Philippe Labbé is simply unmissable.

While dining in train stations generally evokes memories of takeaway containers and cardboard coffee cups, a visit to Le Train Bleu couldn't be more elegant. First opened in 1901, this former Buffet de la Gare hosted artists, actresses, and clothing designers alike, from Coco Chanel to Salvador Dali. Today, the restaurant's stunning interior features sparkling chandeliers and intricately painted ceilings, as well as massive windows overlooking the swarms of train-bound travelers in the station below. À la carte and set menus are available for all three meals of the day; we can't think of a better way to instantly upgrade a travel day.

Located just a hop, skip, and a jump away from Paris' famous opera house (and constructed by the very same architect, Charles Garnier), this breathtaking Right Bank restaurant has been an absolute must-visit since its opening year of 1862. Expect classic favorites such as foie gras, côte de veau, and lamb shoulder served up alongside elegant paintings and an overall jaw-dropping interior design . For fresh seafood lovers, the restaurant's extravagant raw bar is unforgettable. Past regulars include Oscar Wilde and Emile Zola, and don't be surprised if you recognize the establishment's famous dining room from a handful of quintessential Paris-based films.

Frequented by the likes of Picasso, Sartre, and Gertrude Stein, this famous Left Bank institution is beloved for its quaint Saint-Germain location and expansive outdoor terrace perfect for people-watching. Menu favorites include a variety of green salads, omelets, and other classic bistro fare. This is one of the only spots on this list where heading over for a simple pint, glass of wine, or p'tit café is totally acceptable, no food required.

Conveniently located on the lively Champs Elysées, Le Fouquet's has been a Paris institution since 1899. Boasting picture-perfect views of the Arc de Triomphe, this beloved French favorite (frequented by ex-president Nicolas Sarkozy) is overseen by Michelin-starred chef Pierre Gagnaire. Expect pristinely cooked meats, fresh fish, and perfectly executed vegetables served up in a luxurious brasserie setting, located on the ground floor of the celebrated Hotel Barrière. Whether catching a film at the Gaumont or simply taking a break from high-end shopping, Le Fouquet's offers the perfect Parisian reprieve.

Vegans and vegetarians, listen up – this may just be the absolute best meal of your life. Spearheaded by chef Alain Passard, this three-Michelin-starred restaurant has been a benchmark for produce-focused dining since its founding year of 1986. Previously known as L'Archestrate, chef Passard purchased the restaurant from Alain Senderens during the mid-1980s, changed it to L'Arpège, and has maintained its three-star status since 1986. Seasonal menu items are created and based around Passard's own-grown produce, cultivated in gardens across France. L'Arpège is regularly lauded as one of the best restaurants in Paris, and upon visiting, you'll quickly realize why.

Similar to Café de Flore, La Closerie des Lilas is best known for its high-profile clients of yesteryear, many of whom ran in the writer, philosopher, and overall creative circles – think Hemingway, Verlaine, and Picasso. Located on the Boulevard de Montparnasse and laden in greenery, this beautiful Parisian classic is known for its shellfish platters and traditional meat dishes, as well as its extensive menu of homemade cocktails, including absinthe-based drinks. Grab a seat on the lofty terrace on warmer weather evenings, or simply enjoy the nostalgia of the red leather banquettes indoors for a more old-school feel.

Unlike these other pricier institutions, Bouillon Chartier remains one of the most affordable meals in Paris. We're talking two-euro entrées, ten euro main courses — meat and fish included — and a number of budget-friendly vins de table, available in glass, bottle, and carafe formats. With locations at République, Pigalle, Montparnasse, and the original (best) Grands Boulevards, these iconic dining rooms boast high ceilings, Art Deco-inspired interiors, and a slew of traditional dishes that promise to leave your stomach — and wallet — full. Beloved by tourists and locals alike, a trip to one of the buzzy Bouillons is simply unforgettable.

Located just steps away from the Palais Royal and Jardin des Tuileries, Chez Georges is the ideal place for traditional French fare served up against classic wood-paneled decor. Expect hearty classics such as leg of lamb and beef tartare to grace the restaurant's belly-warming menu offerings, plus a variety of French wines to boot. In the hustle and bustle of the restaurant's Sentier neighborhood, Chez Georges offers a blast from the past in one of the most fun and flavorful ways, white tablecloths and customary French service included. 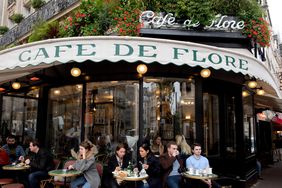 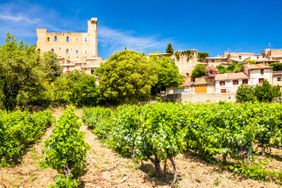