Here's your ultimate guide to dining and hotel-ing in San Juan—visiting Puerto Rico is one of the best ways to help boost and rebuild the island's economy a year after Hurricane Maria.

As the one year anniversary of Hurricane Maria approaches, Puerto Rico's recovery continues. The news cycle has moved on as many basic needs have been met, but that doesn't mean there isn't more to be done. Thanks to the incredible work of so many organizations, the focus has shifted from restoring power and providing meals to boosting the economy. And one of the best ways for people to help is to plan a visit.

"Just by being there, you are helping the recovery," says chef José Andrés. "Puerto Rico is definitely one of the most beautiful places on earth, a place I hold close to my heart." Andrés, the James Beard Foundation's 2018 Humanitarian of the Year and the recipient of a standing ovation at the Oscars, was one of the first on the ground to help feed everyone impacted by the storms. Through his organization World Central Kitchen, Andrés continues to monitor the situation on the ground and is prepared to respond in the event of another hurricane.

"World Central Kitchen has moved from emergency relief mode into a new phase focused on recovery and resiliency, with agriculture and the food economy at the heart of it," he says. "We are supporting local farms so that they can provide more fresh, local produce for the island, and we've created a grant and capacity training program, Plow to Plate, to work with smallholder farms on the island to help them grow their production and build resiliency against future storms." Andrés has also been working on a book about his experience in Puerto Rico for which Lin-Manuel Miranda is writing the foreword.

We Fed an Island: The True Story of Rebuilding Puerto Rico One Meal at a Time by José Andrés is out now.

If you worry that visiting Puerto Rico and sitting on a beach or in a bar sipping rum won't help, think again. "Did you know that 70 percent of the rum that we drink in the United States comes from Puerto Rico?" Andrés says. "They make some of the best rum in the world. One of my favorite cocktails ever is the rum sour. It is so simple and so delicious. I promise you this, when you go and visit the island of Puerto Rico and have a rum sour, you will never want to come back!"

Armed with a few suggestions from Andrés, we visited the island this past June. Here, we've created the ultimate guide to where to eat, stay and play in and around San Juan.

Where to Eat and Drink

"There are so many great chefs—Jose Santaella, Mario Pagan, Enrique Piñeiro, Jose Enrique—who are creating new expressions of Puerto Rican cuisine," says Andrés. "It's an exciting time to visit."

Jose Enrique—La Placita de Santurce is a farmers market by day and street party by night surrounded by crowded bars and restaurants. One of our favorite spots in the area is José Enrique (176 Calle Duffaut, San Juan), the namesake restaurant of one of F&W's 2013 Best New Chefs. "Every weekend La Placita is packed with dancing and energy. When you are in the neighborhood you should go eat at the restaurant of one of my good friends, José Enrique. He was an incredible part of #ChefsForPuertoRico, and is one of the best chefs not just on the island but in America," Andrés says. Plan to arrive early (the restaurant doesn't take reservations) or put your name in and head up the street for a cocktail while you wait. The menu is written on a white board and changes daily based on what's available locally.

Santaella—Also in La Placita, chef Jose Santaella sources ingredients for his restaurant from the farmers market that is just a few steps away. Santaella trained with chefs Eric Ripert in NYC and Ferran Adriá in Spain before opening his own restaurant in Puerto Rico where he creates modern takes on classic flavors. The bar at Santaella (219 Calle Canals, San Juan), especially lively on the weekends, mixes some of the best cocktails in San Juan, including the signature watermelon mojito.

Acapulco Taqueria Mexicana—Located in Santurce, Acapulco Taqueria Mexicana (2021 Calle Loíza, San Juan) brings authentic Mexican street food like sopes, tamales and tacos to the hip Calle Loiza. Run by the young Salvatore brothers, dining here feels a bit like being in their home. The tacos al pastor are a real standout, as are the cochinita pibil, tongue, barbacoa and pork belly versions. We owe chef Anne Burrell a big thank you for tipping us off to this killer spot when it first opened several years ago.

1919—A glass wall provides floor-to-ceiling views of the Atlantic at chef Juan Jose Cuevas's 1919 (1055 Ashford Ave., San Juan) in the Condado Vanderbilt Hotel. But diners don't just flock there for the stunning views. They're also there for the chef's meticulously prepared food, which includes dishes like heirloom carrots with Aleppo pepper, grapefruit, and avocado and kingfish with mussels, clams, and shiitake mushrooms in an intense shellfish jus.

Perla Restaurant—Also in San Juan's Condado area, Perla (1077 Ashford Ave., San Juan) is located in the famous conch shell at the La Concha Renaissance Hotel. Italian architect Mario Salvadori designed the shell in 1958, which sits on an infinity pool and has stunning ocean views that make it feel like the perfect spot for chef Lindell Smith's sophisticated seafood-focused menu. The restaurant also has an impressive wine list including 30 options by-the-glass.

Café Don Ruiz—For a perfect café con leche or cortado made with single origin beans hand-picked in the mountains of Yauco, Puerto Rico, check out this café and roastery. It's tucked inside the beautiful Cuartel del Ballaja, formerly Spanish barracks built in the 1850s that are now used for art and music classes and a museum. The café's menu also includes Mallorcas, the traditional ham and cheese sandwiches made with sweet bread and topped with powdered sugar. Cuartel de Ballaja, Calle Norzagaray Esq. Beneficiencia, San Juan

Hecho en Casa—Hecho en Casa (249 Calle San Francisco, San Juan) in Old San Juan, serves a number of Puerto Rican classics including mofongo, one of the island's best-known dishes. Mashed fried plantains make up the base of the dish, which can be topped with different proteins and sauces. We especially liked the grilled chicken mofongo with white wine cream sauce.

Caldera Café—This small coffee shop on Calle San Jose also uses local beans. Theirs come from the mountains of Maricao, home of an annual coffee festival, on the western side of the island. Try the coquito: coffee with rum, spices and coconut milk. 202 Calle San Jose, San Juan

La Factoria—There's still no sign outside the famed La Factoria (148 Calle San Sebastián, San Juan), voted one of the world's 50 best bars, but there's nothing secret about this speakeasy-inspired bar. Multiple rooms provide different experiences from wine to dancing to cocktails, including signature favorites like the Spiced Old Fashioned and Lavender Mule.

AC Hotel—The vibe at this new sleek and modern hotel in Condado is more urban than beach with rooms that have a soothing, minimalist design. But you'll still get your Caribbean fix at the rooftop pool, which has great ocean views, and with beach privileges at its nearby sister property San Juan Marriott Resort & Stellaris Casino.

La Concha Renaissance—The La Concha, also in the Condado district, does old and new really well. It still has some of the 1950s glamour that put it on the map, especially in the casino and Perla restaurant, but has married it with large modern guest rooms and stunning pools.

Condado Vanderbilt—Once Frederick Vanderbilt's property, the lovely hotel opened three years ago and quickly became known for its impeccable service. It also has a beautiful hammam spa and the stellar 1919 restaurant.

Olive Boutique Hotel—This intimate property has a Mediterranean feel with lots of wood tones, tiled terraces and outdoor showers in each of the rooms. Mario Pagan, one of the island's most celebrated chefs, has a steakhouse here. In December the group will open a new luxury property in Condado, O:LV Fifty Five.

Serafina Beach Hotel—The scene-y Serafina opened in the spring and has a bit of a Miami feel with its beachy design and lively party vibe. Rooms are bright and airy and have lovely water views.

Hotel El Convento—This former convent, originally built in the 17th century, sits in the heart of Old San Juan. It has the most charm and history of any hotel in the area with incredible archways, lavish antiques and beautiful original woodwork.

Small tour operators and business owners have been especially hard hit by declining tourism in the wake of the hurricane. So get out and explore with some of the island's experts.

Food tour of Old San Juan—Explore Old San Juan through its food with Spoon Food Tours. Expert guides take you through everything from coffee to chocolate, Mallorcas to mofongo.

Catamaran tour and snorkeling—Trips set out from Fajardo, about an hour from San Juan. Explore small islands, swim in crystal clear water and check out the sea life along the area's coral reefs. We headed out on the Barefoot IV with Castillo Tours and were lucky enough to sail with Tito, an incredibly capable captain but also a great DJ and guide. 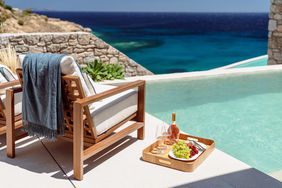