This Texas City Is America's Next Great Culinary Destination

When considering America's best culinary destinations, the big restaurant hubs probably first come to mind: places like New York, Chicago and San Francisco. But though other locales aren't always graced with Michelin stars, plenty of cities offer a unique food cultures all their own – many of which can fly under the radar. San Antonio apparently felt it fell into this group – despite our recent proclamation that it's becoming a great dining destination – but the U.S.'s seventh largest city has found a way to get some of the recognition it deserves. The Texas metropolis has become the second city in the country to receive UNESCO's Creative City of Gastronomy designation.

Created in 2004, the United Nations Educational, Scientific and Cultural Organization's Creative Cities Network encourages its over 100 members to "work together towards a common objective: placing creativity and cultural industries at the heart of their development plans at the local level and cooperating actively at the international level." Cities have to apply to join the network, but admission isn't given willy-nilly. Applicants also have to demonstrate why they should be chosen for their requested creative field.

Announcing the city's acceptance to the network, Visit San Antonio cited the city's "confluence of many world cultures such as Mexican, Spanish, German and French, as well its geology and geography" and its Culinary Institute of America campus as examples of its gastronomical significance, referring to its current culinary culture as "Tex-Next." "Travelers are increasingly seeking a destination with a robust culinary scene as a way to really get to know the heart of a city," Casandra Matej, President & CEO of Visit San Antonio, said in a statement. "The UNESCO Creative City of Gastronomy designation confirms what millions of visitors have known all along—San Antonio's cuisine is truly unique and authentic to our region."

San Antonio Mayor Ron Nirenberg also chimed in, calling the designation "a great honor," before adding, "As a Creative City of Gastronomy, we will seek to strengthen and expand international connections, share our culinary arts and heritage globally and introduce San Antonio as an international culinary destination."

Interestingly, America's other Creative City of Gastronomy is Tucson, Arizona, which received the distinction in 2015. 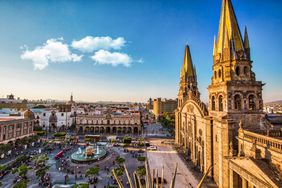