The Roast Chicken That Changed America

Big flavors, big personalities, and big hair ruled the '80s, when NYC's Jams was at the white-hot center of everything. Here's a history of the restaurant and a look at its game-changing California cuisine.

A main course of roast chicken and French fries, audacious in its simplicity; salads that appear to have floated down from the sky and landed gently on the plate; an improvisational chef; an open kitchen; a wood-fired grill. When Jams opened in 1984, it introduced a radical new kind of restaurant experience to New York City and a style of cooking dubbed California cuisine. Jams closed after only five years, yet it made a lasting contribution to the very definition of American food. The recent reboot of the restaurant at NYC's 1 Hotel Central Park invites us to remember how we began to eat the way we do today.

Jonathan Waxman, like many of his chef contemporaries, took a circuitous route to the kitchen. By the time he was 24, he had been a trombone player, a Ferrari salesman, and a barman. For kicks, he took a Bay Area cooking class; the instructor, sensing Waxman's inner chef, nudged him to matriculate at La Varenne in Paris. Arriving in France in 1976, he discovered nouvelle cuisine, which moved French gastronomy away from a codified repertoire toward more personal, seasonal, lighter dishes. Waxman returned to California with a vague notion of how to apply the nouvelle ethic: "What if we took all the sort of classic regional foods of America and did what they did in France?" he mused. "Lighten them up? Make them more accessible? Make them different somehow?" In particular, he envisioned deep-fried strips of abalone tossed into a salad to wilt the greens.

Waxman did a stint at Chez Panisse in Berkeley, then headed south to Santa Monica and Michael McCarty's influential New American restaurant Michael's, where he assumed command of the kitchen in 1979. This is where he began to hone his experimental, stripped-down food, most famously a half-chicken with tarragon butter and fries that slyly drew on bistro convention. The legendary California chef Jeremiah Tower, on his first visit to Michael's, found that roast chicken to be "the most perfect reproduction of the best effort the French had ever done." After his meal, he marched into the kitchen and demanded, "Who is responsible for that?"

The Best Classic Restaurants in Every State
Get the Recipe: Roast Chicken with Salsa Verde and Roasted Lemons

While working at Michael's, Waxman befriended Melvyn Master, the British-born sales director of Sonoma County's Jordan Vineyard & Winery, and Melvyn's wife, Janie, a young veteran of great French kitchens with whom Melvyn had owned a Denver restaurant. In 1983, the three decided to open a place together on New York City's Upper East Side defined by what Waxman termed "rusticity," epitomized by a wood-burning grill and the absence of standard kitchen machinery such as a Robot Coupe. The name Jams, among other things, was shorthand for "Jonathan and Melvyn."

The Jams team shared a knack for improvisation. New York magazine insisted on a food photo for a pre-opening story, when the restaurant didn't even have gas yet; Janie used an eyebrow pencil to paint fake char marks on raw scallops so that Waxman could compose a "grilled" shellfish salad for the camera. When the grill wasn't installed in time for the opening party, Melvyn positioned two outdoor Webers under the ventilation hood. Problem solved, until the fan broke. Remembers Melvyn, "The room is filled with smoke, and people's contact lenses are bulging out of their eyes. Finally, we got it under control."

Get the Recipe: Red Pepper Blini with Creamed Corn and Smoked Salmon

But those were mere speed bumps. Jams was a new kind of uptown restaurant, effortlessly elegant and California cool: chalk-white walls adorned with modern art, blue-rimmed plates, flowers arranged daily by Janie herself. The minimalist design reflected the food. Diners accustomed to eating rich French dishes in opulent dining rooms flocked to Jams with a curiosity comparable to those who would visit WD-50 two decades later to experience molecular gastronomy. The approach was revolutionary enough that Marian Burros devoted the first three paragraphs of her March 1984 New York Times review (an enthusiastic two-star appraisal) to defining California cuisine and explaining the inherent valor in Waxman's approach: "There is no place to hide the mistakes."

Jams was more than a restaurant: It was a party, a spectacle, and an event. Steve Martin, Mick Jagger, and Paul Newman ate there often, sometimes on the same night. Tables were such hot commodities that Princess Stéphanie of Monaco consented to have dinner in the restaurant's ramshackle office one evening rather than be turned away.

Get the Recipe: Snapper with Black Beans and Bok Choy

Adding to the excitement, Waxman changed his menu not just regularly, but spontaneously: "Everything has Beaujolais in it!" he pronounced the day Beaujolais Nouveau was released one fall, to the horror of cooks already prepped for lunch service. Once, he decided to try to grill live lobsters; they (understandably) began crawling off the grate, requiring the cooks to cage them.

While diners and critics couldn't get enough of Jams, many New York cooks who'd busted their butts to master classic French cuisine loathed the California style, at least initially. "Jonathan was the devil to me," remembers Eric Bromberg, who trained at Paris' Le Cordon Bleu before working at Jams. "I worshipped French cooking. And he was spitting in its face." Today, Bromberg, who with brother Bruce helped usher in the comfort-food era with his Blue Ribbon restaurant empire, says, "Had I not had that experience, I would be somewhere in the fancy-food, high-end French world now. It took me a while to really grasp it and understand."

Other California chefs migrated to New York after Waxman, each contributing to the city's evolving culinary identity, but whether this cooking could legitimately be called a "cuisine" remains debatable. Chez Panisse's Alice Waters offers this distinction: "When you talk about Chinese cuisine or even Italian cuisine, we're talking hundreds, thousands of years." To her, the California style of the '70s and '80s was more a philosophy. "That's what is enduring."

Get the Recipe: Avocado and Shrimp Salad with Red Goddess Dressing

Waxman has stayed true to this philosophy for more than 30 years, at Manhattan restaurants like the late Washington Park and the still-thriving Barbuto. The menu at the rebooted Jams seamlessly combines dishes from the original with new innovations (including riffs on the iconic roast chicken), a tribute to how prescient Waxman was, and how sure-footed even from the start. This Jams invites us to celebrate the people and the dishes that helped lead the way to where we are now. 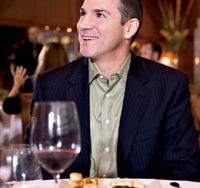 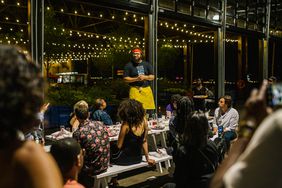 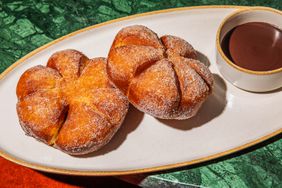