A new restaurant is slinging "Jewish-style barbecue," but kosher pitmasters have been honing their own takes on barbecue for years.

Harris Mayer-Selinger grew up eating his mom's brisket on Rosh Hashanah. As a 13-year-old, he'd get drunk off of Manischewitz wine at Bar Mitzvahs. He still makes the charoset for his family's Passover Seder. These kinds of cultural connections to Judaism are what inspired the dishes at Mayer-Selinger's newest restaurant, Pulkies—a Jewish-style barbecue joint in New York City's Chelsea Market.

Mayer-Selinger might say that Jewish barbecue is what you get when you meld traditional Jewish flavors with American barbecue classics. That's what he's doing at Pulkies, with dishes like "brisket-y" carrots and onions and noodle kugel mac and cheese.

"Pulkies is the culmination of me as a person," he said. "As a cook, as an eater, as an American, and as a Jew." Pulled turkey, chopped brisket, and honey butter cornbread make it clear that Pulkies is a barbecue place. Chopped liver, Manischewitz wine jelly, and endive and apple "charoset" salad make it clear that this is also a Jewish place, though it's decidedly not kosher.

Mayer-Selinger doesn't keep kosher, most of his secular Jewish friends don't keep kosher, and neither do tons of Jewish people across New York, the country, and the world (this writer included). But kosher barbecue is, inherently, Jewish barbecue. While Pulkies might be the first place to label itself "Jewish-style barbecue," kosher pitmasters have been honing their own takes on a kind of Jewish barbecue for years.

Rabbi Mendel Segal, co-owner of Mendel's Backyard BBQ & Brew in Miami, doesn't want people to say his food is good for kosher barbecue. "I want to hear, 'This is good barbecue,'" Segal said.

In his experience, there are two primary misunderstandings when it comes to kosher barbecue. One, that it tastes different. "A kosher brisket should not taste different from a non-kosher brisket," he said. Two, that kosher means the food is blessed by a rabbi. It doesn't. It means that the animals are slaughtered in a specific way, and the food is prepared according to kosher law.

Aside from pork being off limits, certified kosher barbecue doesn't use any dairy, since kosher law prohibits the mixing of milk and meat. As for Jewish barbecue, Segal said, "I'm not really sure what Jewish barbecue means, unless it's taking certain cultural elements, like doing a barbecue brisket knish."

For Alexander Remer, who opened Shmorg: The Smoke Joint in Los Angeles this past spring, the difference between Jewish barbecue and kosher barbecue is a technicality.

"Kosher is just a set of regulations that we have to maintain in order to qualify for certifications of being kosher. There isn't any cultural flair to it," he said. Remer didn't grow up keeping kosher (he became more observant upon going to Yeshiva University and getting married), but he did grow up eating his bubby's brisket, and that's how he thinks about the idea of Jewish barbecue: as meats that Jews are familiar with, simply presented in new ways.

That's exactly what Ari White is doing with his Hackensack, N.J.-based kosher barbecue truck and pop-up, The Wandering Que.

White, who was born and raised in El Paso, T.X., is all about making non-kosher foods accessible to the kosher world. He pushes the boundaries with kosher versions of chitlins (made of chicken), bacon (made of lamb), and sausage (made of beef). White's latest experiment is chili crisp, the Sichuanese condiment made of fried garlic, shallots, and crispy chilies that once broke the Internet.

"I don't know how I made it 41 years before tasting my first chili crisp," White said. "It doesn't exist in the kosher world, and it needs to."

Dani Goldblatt, who owns Holy Smokes Kosher BBQ in Los Angeles, occupies her own corner of kosher barbecue simply by being a woman. "In the kosher barbecue world, it's almost all men," she said. "I'm this badass girl who's splitting wood and stoking the fire, but I'm also an orthodox Jew."

Right now, barbecue is Goldblatt's side gig; she also teaches high school Jewish studies. And though she doesn't consider herself "a big brisket person," there's nothing Goldblatt loves more than seeing a customer's face light up when they taste her smoked brisket for the first time.

Jews have a long history with brisket, and it's that history that binds together these many different forms of Jewish, Jewish-style, and kosher barbecue.

"Brisket was hard to cook and nobody really wanted it, so it was dirt cheap," said Bryan Gryka, chef and general manager of Milt's Barbecue for the Perplexed in Chicago. Jewish immigrants living in New York in the 18th and 19th centuries often gravitated toward brisket because it was all they could afford. Using brisket, they made deli staples like corned beef and pastrami, which have since become synonymous with Jewish cuisine.

Traditional Jewish-style brisket—the kind you might find at holidays—is braised, yet the brisket at these barbecue spots is cooked in all kinds of ways. At Pulkies, Mayer-Selinger confits the brisket in its own fat. At Shmorg, Remer cures briskets overnight. At Milt's, Gryka doesn't ever use mesquite because he can't stand the flavor.

"It's all Jewish," said Jeff Aeder, the founder of Milt's. "It's just different degrees of observance and interpretations."

Jewish barbecue itself seems to also be a spectrum. It isn't one thing; it's all of these things. It's kosher and non-kosher, religious and cultural, traditional and experimental. It's also fantastic. 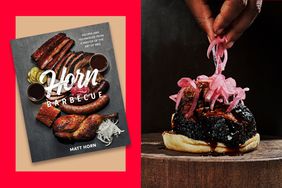