Where to eat in Mexico's Valle de Guadalupe, according to chef Sheyla Alvarado.

Chef Sheyla Alvarado runs one of Mexico's most exciting restaurants: Lunario at La Lomita Winery in Valle de Guadalupe wine country. Since opening in 2019, the modern eatery has become a culinary destination in the Valle, just an hour and a half south of Tijuana.

It's only relatively recently that restaurants like Lunario and Animalon in Valle de Guadalupe have emerged as destinations in their own right. Although the region's wine started getting international recognition two decades ago, its culinary scene only came into its own around 2017, Gerardo Tejeda estimates. Tejeda works at La Lomita Winery, and not coincidentally, is Alvarado's partner — it's where they met.

"Over the past three to four years, the Valle has become a place [where] people are coming just to eat," he said. Chefs like Benito Molina and Solange Muris brought experimental, chef-driven fare to the region in the early 2000s, pushing the stereotype of Baja cuisine beyond lobster and fish tacos. Today, Alvarado is carrying this tradition forward.

We talked to the chef to find out where she and Tejeda eat on their days off. Here are six not-to-be-missed restaurants for your next trip.

"Animalon is really good; I think it's one of my favorites," Alvarado said. Built around a 200-year-old oak tree, Javier Plascencia's outdoor seasonal restaurant epitomizes Valle de Guadalupe. Plascencia is synonymous with the Tijuana cuisine that he helped propel to international acclaim. He opened his first restaurant in the Valle, Finca Altozano, in 2012. "It was kind of empty for the first year," said Fernando Pérez Castro, the founder of La Lomita Winery. Castro has witnessed the evolution of the Valle's dining scene over the past two decades. 2012 was still early days, and Plascencia was one of the first chefs from outside the Valle to debut here. Over a decade later, it's still going strong.

Alvarado's favorite dish here, a bean risotto with lobster, is a riff on Puerto Nuevo-style lobster, named for the fishing port where it was conceived 40 minutes north. A half a century ago, lobster was a poor man's food, an affordable staple for the city's fishermen, sold at $2 a pop. Today, Puerto Nuevo is still known as Mexico's lobster capital, and its culinary calling card is lobster fried in lard, served with refried beans and flour tortillas. It was the first dish that people from other regions of Mexico really began to associate with Baja, Castro explained. And Villa Torél, the restaurant at Bodegas de Santo Tomás Winery — one of the region's oldest wineries — is the place to experience it.

"It's by the port, so they get super fresh seafood," Alvarado said. Many Ensenada establishments boast seafood as a specialty, so Muelle 3 has stiff competition. Taste their sashimi and ceviche, however, and you'll see why they come out on top.

Put plainly, Doña Esthela is a requisite stop. Years ago, Esthela started her business selling burritos to construction workers working in nearby wineries. Today, she has an extensive brick-and-mortar operation that's frequented by celebrity chefs — and she's decidedly one herself. Her food isn't that different from Mexican home cooking, and actually, that's kind of the point. Platters of queso fresco on the table, machaca with eggs, and Bisquick-style pancakes garner hour-long lines, even on weekday mornings. It's a destination for locals and tourists alike.

The region's superstar chefs Benito Molina and Solange Muris opened Manzanilla in 2000, and it's widely considered to be the area's first chef-driven restaurant. It has since moved to Ensenada's hip, still-industrial port, sitting in the shadow of multimillion-dollar yachts. The rotating multi-course tasting menu — if you so choose — offers six-year-old abalone with a mole of pipián and seaweed, and infladita, a deep-fried pocket of masa filled with carnitas.

And, of course, there is Lunario, Alvardo's own restaurant. It was conceived as the fine-dining counterpart to TrasLomita, the property's original outdoor-only restaurant. Alvarado's culinary prowess is most evident in the simple dishes. The tasting menus change monthly but might include a carrot soup drizzled with cream and peppered with buckwheat kernels; soft-shell crab, deep fried and served on a blue corn tortilla; and a dessert of strawberries served with angel hair strands of spring peas, finely julienned. Everything is a testament to Baja's bounty.

"It's been changing, but the sad thing is that most of the big farms that we have are all for exportation," said Alvarado. "So they take everything. We've been working with the farmers to get to a point where the produce stays in Mexico."

Nearby, there's a grower of heirloom tomatoes that used to export everything to the United States. Now, Alvarado estimates, 70% of the harvest stays here. "We're trying to support each other as a community because it's sad that we have such good things and everything goes away," she said.

"A half-hour away, we have another guy that used to sell all his basil to Costco," she said. "He also changed his mind, and he's trying to keep his products in Mexico. He noticed that he was making a lot of money but he was like, not becoming part of the community. And that's not the way he wanted to live."

It's not just about food sovereignty. It's the very thing that defines Valle de Guadalupe's identity. "I think Baja cuisine right now is the products, the cheese, the vegetables," said Alvarado. "It's not a way of cooking or specific dishes. For me, it's tough to have Baja cuisine be just lobster and tacos when we have such great products."

Here, the food elevates the wine as much as the wine elevates the food. "I would say we put food first," said Castro. "In a country like Mexico, it's no contest. The biggest challenge for Mexican winemakers is how to make a good companion for food."

"In France, it's completely different," he said. "There's 600 years of drinking wine and eating. Considering that the cuisine of Valle is a 20-year-old thing, it's just as old as the wine movement. And wine was a big influence for Baja cuisine to be how it is."

Castro attributes the boom in Valle gastronomy to two main forces: Benito Molina and Solange Muris, the chefs behind Manzanilla, and Jair Téllez, of the restaurant Laja. "[Jair] opened his place in the middle of nowhere in 1999," he said. "They were both very conscious of making food that could pair with wine."

Today, it's impossible to talk about Valle de Guadalupe's wine without talking about its food. And chefs like Sheyla Alvarado are a big part of that. 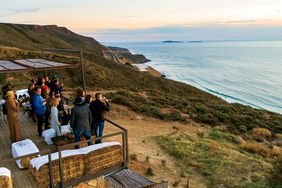 Valle de Guadalupe Guide: Where to Stay, Eat, and Drink