A celebration of the best barbecue in America and the people who sustain it.

Barbecue is one of the most beautiful things America ever did. It was not, however, inevitable. The succulent, tender-crisp, glistening brisket we now worship is not simply the result of good fortune, though we are exceedingly blessed to claim it, as well as other complicated treasures like ribs, pulled pork, and enough regional sauces to fill the Mississippi. The history of American barbecue, rather, is inextricably linked with the brutality of colonialism and slavery. Still, today, the craft owes its richness to the migration patterns, regional resources, and ingenuity of its original innovators.

"Barbecue was born when Native American meat-smoking techniques were fused with the ways the British traditionally cooked meat," wrote Adrian Miller for Food & Wine in his obituary for David McAtee, the Louisville chef who was killed by law enforcement in June. "Because the new cuisine was so labor intensive to prepare, enslaved African Americans became its principal cooks. Barbecue spread throughout the South as slaveholders took their enslaved barbecue cooks with them."

After Emancipation, the barbecue tradition spread even further, its stewards adapting to new circumstances just as they always had. These days, you can find barbecue in just about every crevice in the country, with regional variations so distinct they cause legitimate fights.

American barbecue is facing a unique moment, having endured months of a pandemic that continues to devastate the restaurant industry and the workers who sustain it, with few signs of relief on the way. As we noted back in April, the somewhat solitary nature of a pitmaster’s existence lends itself well to the new normal—but it has not been easy-going. We're sharing these stories to celebrate the breathtaking complexity of barbecue in America today, in part to elevate the places that need our support to stay alive. In addition to our survey of the best barbecue in the country in 2020, we're exploring everything from the essential regional sauces to the BBQ joints that are forever lodged in our brains.

David Landsel's survey of the best barbecue in every state is an exhaustive guide to the life-changing, worldview-shattering, drive-20-hours-to-visit barbecue joints that you need in your life, because, yes, every state (even the ones you wouldn't think) has barbecue worth obsessing over. For the sauce enthusiast (or novice), Gowri Chandra breaks down the eight essential regional American barbecue sauces that every BBQ lover should know. We're sharing stories of the barbecue joints we pray will persevere (as Illyanna Maisonet does in her tribute to Sacramento's Post Oak Barbecue), the spice rubs that made us better BBQ cooks, and the people who have made barbecue so special to us. Khushbu Shah waxes poetic on the minced meat marvel that is the seekh kebab, and Nina Friend asks the question, What is Jewish barbecue?

So read on for all the meat inspiration you need right now, and maybe, when it feels safe, get in the car and visit some of them? These are the United States of Barbecue. — Maria Yagoda

After asking the question for a quarter of a century, senior editor David Landsel draws a rough sketch of what the best barbecue in America looks like. With rare exceptions, it will not be found in places owned by people who refer to restaurants as concepts, nor will there be cocktail menus or appetizers. Nobody will ask you if you have dined with them before, or if you’re familiar with how the menu works; any decor should be mostly accidental. Barbecue, quite simply, is about the meat, and whoever is patiently working the pit. And while running any kind of small business right now is heavy going, many of the best barbecue spots are adapting at lightning speed. Read more.

Some regional styles of barbecue sauce are immediately recognizable: the playground-yellow mustard sauces of South Carolina, or Big Bob Gibson’s mayo-based Alabama white sauce. Others, less so. And sometimes this causes outsiders to conflate regional nuances, or invent generalizations where they don’t exist. Read more.

The Incredible Story Behind One of the Country's Best BBQ Sauces

Old Arthur’s Barbecue Sauce is built upon a family history that traces its roots directly to slavery. Arthur Watts, who was born into slavery just outside of Kansas City, Missouri, became a local barbecue celebrity throughout his life. Arthur’s recipes and his love for barbecue lived on within his son, Eudell Sr., who transferred the barbecue knowledge to his son, Eudell Jr., who carried it on to his son, Eudell III, who in turn taught his son, Eudell IV. About a decade ago, Eudell Watts IV decided it was time to share his great-great-grandfather's recipes with the rest of the world. This is the story of how Arthur Watts’ flavors, skill, and heart have endured—both within his own family and beyond. Read more.

Like other revered barbecue dishes — brisket, ribs, pork shoulder — seekh kebabs are ultimately very simple in construction. It is essentially a South Asian sausage without a casing. Finely minced meat is massaged with grated onion, fresh cilantro, and fistfuls of spices like turmeric and Kashmiri chili powder, and the mixture is pressed around a wide and flat sword-like skewer, known as a “seekh.” The meat is grilled over flames until it renders its fat and forms a tube that is crispy on the outside and tender on the inside. Read more.

The very idea of Jewish barbecue seems mishiguene (Yiddish for “crazy”), since American barbecue is often centered around pork, which is as non-Jewish as you can get. And yet, Jewish barbecue makes total sense, especially because brisket, another pillar of American barbecue, has long been part of the Jewish food canon, at least in the Ashkenaz tradition. Read more.

This N.C. Institution Taught Me the Meaning of Barbecue

Known to be the longest-running restaurant in Durham, Glen and Lillian Bullock opened the original Bullock’s Barbecue in 1952 after years of barbecuing at home. A family of humble beginnings—as his grandson Thomas “Ty” Bullock tells it, “you could see the chickens through the floorboards, they were so poor”—Glen started cooking pigs at home in the 1930s as a means to feed his family and survive. Read more.

"Like many barbecuers, McAtee dreamed of one day owning a brick-and-mortar, sit-down restaurant. That dream remained deferred far too long because he lacked the financing, a plight common to far too many Black entrepreneurs. Without access to capital from either bank loans or running in the social circles that could lead to private equity investment, Black barbecuers make do with what they have—forced to keep dreaming far longer than their white counterparts." Read more.

A barbecue pit between a racetrack and a Bass Pro Shop is one of the most special BBQ spots in the state. Senior editor Margaret Eby sings the praises of a sentimental favorite. Read more. 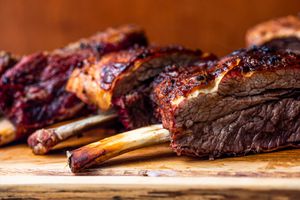 The Best Meats to Smoke at Home (and Where to Buy Them)
Was this page helpful?
Thanks for your feedback!
Tell us why!
Related Articles 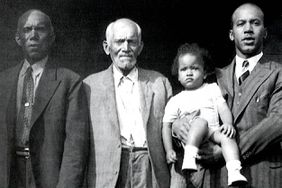 The Incredible Story Behind One of the Country's Best BBQ Sauces