Your chair, wine glass and fork have stories to tell.

At first glance, you may not notice the vintage red velvet banquettes lining the walls of Soif, the basement wine bar that opened last November in Chicago. At best, they may look a little familiar. In fairness, countless other found treasures vie much louder for your attention at this red-lit boîte: gilded mirrors, vintage brocade Scalamandre pillows and sculpted leather chairs sourced from the dining room at Ralph Lauren.

But for Oliver Poilevey, chef/owner of the Chicago bistro Le Bouchon, sliding into one of those tufted benches for a drink feels "just like a hug from an old friend." That's because those banquettes already spent a lifetime (and much of Poilevey's own life) at La Sardine, the popular French bistro his late parents, Jean-Claude and Susanne Poilevey, opened in 1998 and operated for 22 years. Decades of first dates, anniversaries and birthdays took place on those seats; life decisions were uttered aloud and imminent breakups decided internally. They witnessed gossip and awkward silences along with red wine spills surreptitiously scrubbed out with cloth napkins. That was, until the summer of 2020, when the pandemic brought about Sardine's untimely closure.

When a restaurant goes dark for good, the pieces inside succumb to all sorts of fates. A liquidator might scoop them up and resell them. Perhaps the pieces will go the way of the banquettes from the Soho Room in New York City, which the Village Sun photographed being broken down and tossed in a dumpster in May 2020. Or they'll be sold at an auction watched by people around the world, as in the case of the caviar spoons and copper pans from the iconic Tavern on the Green in New York City and Charlie Trotter's in Chicago. Sometimes the pieces remain frozen in time for months, collecting dust while they await absorption into the next business, when a fresh coat of paint and a few new accent pillows signal diners they're somewhere new.

It's rarer that pieces get so quickly snapped up by a treasure hunter like Soif owner Aldo Zaninotto, whose penchant for amassing vintage objects began decades ago, while browsing the Sunday flea market in the Gare neighborhood of his native Brussels. Zaninotto admits he could have sourced red banquettes almost anywhere, but the ones from Le Sardine were emblematic of his larger-than-life friend, Jean-Claude, who died unexpectedly in 2016.

"When I speak French, I think of Jean-Claude," Zaninotto says. "I wanted to have a part of Jean-Claude in my place—he had to be [at Soif]. It's a blessing in a way, knowing my friend is there to watch me, like when he used to come to my restaurant Osteria Langhe on Tuesdays to joke and complain and eat my pasta."

The banquettes also fit the vision for interior designer Erin Boone, the founder of Boone Interiors who helped Zaninotto design Soif. She says those pieces help the bar feel both timeless and current. "We were drawing on little clandestine, happen-upon bars in Europe," Boone says. "We talked about Paris a lot."

Even if you've never been to France, there's something familiar—even sentimental—about the look of French-inspired bars and restaurants. I asked Patrick Dunne, the owner of culinary antiquity shop and interior designer Lucullus Antiques in New Orleans, why Frenchified nostalgia is such a design constant in upmarket restaurants and bars. He notes that it owes in part to a culinary revolution in 17th century Europe that predated the French Revolution, a topic he covered in his 2002 book, The Epicurean Collector: Exploring the World of Culinary Antiques.

"The locus of this culinary upheaval was France, and they became the apostles of the new food, techniques and style," Dunne says. "Almost everyone (through) the 20th century who wanted to aver fine dining would have first thought 'French.' Needless to say much of the equipment, although not necessarily invented by the French, was expropriated by them and exported."

To this day, French design endures as an aspirational ideal of dining out. "In the same sense that increasingly there has been a tendency to want emotionally nourishing foods, we want interiors we identify with, that have a little bit of nostalgia in them," Dunne says. That is to say, even if you have no intention of pouring your daily coffee from an antique silver pot, "you still like the notion of it and dream that you would do so."

If anyone would drink coffee from a vintage silver pot, it's Dunne, who's been known to bring a tablecloth to construction sites atop which he assembles a proper lunch. He's helped imbue Frenchified nostalgia into restaurants across the South. Marble reclaimed from a shuttered courthouse was reincarnated into bar tops and bathrooms at Frank Stitt's Birmingham bistro, Chez Fonfon. At Rick Tramonto and John Folse's New Orleans eatery, Restaurant R'evolution, you'll find such 18th-century treasures as a copper braising daubiere, French pottery olive jars and a wooden mortar and pestle—all of which "might have been found in New Orleans in the past," Dunne remarks. Gaze long enough at the host stand at On Swann in Tampa, and you'll discern it's an old church lectern. In the kitchen, a hulking Belle Époque table that houses the bread station previously functioned as the island in Trudy Cooper's Clearwater, Florida, home kitchen.

For Cooper, a self-described genealogy nut, it's comforting to be in the presence of objects that preceded and (hopefully) will outlive us. "People say it's just stuff, but I don't find that," says Cooper, who co-owns the restaurants On Swann and Oak & Ola with her husband, John Cooper. "I think it's about connection to our past."

Perhaps the most striking of all the vintage treasures that adorn On Swann and Oak & Ola, which is housed in an old armature, is the silver and silver-plated flatware, sourced from rummage sales through the years.

"We've found boxes and boxes over the years—always with a twisted handle or a baby spoon thrown in," Cooper says, musing that it's often a relief for folks to offload these heirlooms. "It's interesting to think that some people who come into our restaurants, their relatives may have owned this stuff."

And boy, do they go through it—giving it "one last fling" before it becomes a casualty of a frenzied table clearing. It's remarkable to pick up a silver fork or slide into an upholstered red bench that's already endured for generations in a home, or managed to survive the pummeling of daily restaurant service stretching across decades. But therein lies the lure of these storied and resilient oddities.

"The cool thing about something original is no one else will have it," Boone adds. "The other side of that is you won't be able to find it again if someone else gets it first, or it breaks or frays or falls apart."

For restaurateurs like Zaninotto, as long as these pieces endure among us—with their real and aspirational memories stitched, carved, painted, scratched, twisted and stained in—we briefly transcend the present moment in time and connect to something larger, if perhaps beyond the realm of what's possible. For those few hours at the restaurant table, we can reunite with someone we've lost, drop in on the 19th century Paris of our imagination, or simply be the sort of person who takes their morning coffee from a silver pot. 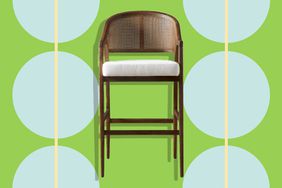