Yes, there will be a burger, and it sounds spectacular.

In August 2018, award-winning chef (and longtime Charleston fixture) Sean Brock announced that he would be leaving his restaurant group after a twelve-year partnership. He'd remain "founding chef and culinary advisor" at the Husk restaurants in Charleston, Nashville, Greenville, and Savannah, but would completely cut ties with Minero, McCrady's, and McCrady's Tavern. While he mentioned plans develop new concepts in Nashville, details were scarce and the restaurant world was left to blindly speculate on his next move.

Now, Brock's new era is coming into clearer focus. On Wednesday, the chef revealed that he had been tapped to helm the forthcoming signature restaurant at Grand Hyatt Nashville, which is set to open this fall inside of the massive Nashville Yards project.

"The energy in the air right now in Nashville is electric," Brock tells Food & Wine. "This city is attracting so many creative and forward-thinking people who are moving here to chase their dreams. Nashville has always been that city for music and now it's becoming that city for small and unique businesses. The sense of community is extraordinary and that breeds courage."

Here's everything we know about Brock's highly anticipated (but as-yet-unnamed) downtown Nashville restaurant so far.

"The idea is to truly embrace and be inspired by the original great American hotel restaurants, to invigorate the spirit of those historic dishes," Brock said in a statement.

And, yes, there will be a burger—though quite different from the famous Husk cheeseburger.

"It will be inspired by the classic steak dishes of the 19th-century American hotel cookery of that era, [which] was so creative and fun!" Brock tells us.

The restaurant, designed by DAAD's Nick Drydon, "will feature plush banquettes, two bars—one open and lively while the other will be warm and intimate—and large booths to create a cozy and comfortable atmosphere," per a statement.

The hotel itself will be 25 floors, with event space, multiple bars, and a pool deck, all located inside Nashville Yards: a 17-acre project billed as a "walkable, urban community" that will feature multiple retail and restaurant concepts. According to the Tennessean, there are already two Amazon operations hubs currently under construction at Nashville Yards complex.

The other new project

And not too far away, at 809 Meridian St., Brock is plotting another dream restaurant that's set to open this year: an ode to the foods of Virginia's Appalachian coal country, where the chef spent his childhood. Last year, the chef told the WSJ Magazine that the concept would have a "focus on fermentation and mix of Cherokee and German-immigrant traditions," and that the project will include an heirloom seed bank.

As we reported last year, the 10,000-square-foot restaurant will be spread across two floors of a converted industrial building. Upstairs will be an intimate tasting menu-style dining room, and downstairs will be a bit more casual, with an open kitchen and showcase of Southern folk art that Brock has collected over the years.

Brock's as-yet-unnamed restaurant at the Grand Hyatt opens this fall at Broadway and 10th Ave. South. 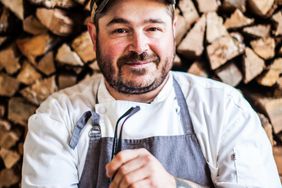