The Vegas Prime Rib Dinner Is Back and Better Than Ever

Where to eat the best new versions of this old-school showstopper.

Decades ago, prime rib rode high on just about every Las Vegas menu, sometimes for the wrong reasons. The loftily named cut of beef —“I guess it sounds better than calling it ‘regular rib,’” says chef Michael Symon—was generally inexpensive, quick to serve, and a culinary loss leader from one end of the Strip to the other.

While big-ticket Vegas eateries like David Chang’s Majordomo Meat & Fish, the newly launched Mayfair Supper Club, and Symon’s secret-ish restaurant Sara’s all serve highfalutin interpretations of the dish, it did not start that way. Back in the 1940s, according to some reports, the Last Frontier introduced a prime rib special, priced at $1.95 (around $30 today). Luxuriously touted as “juicy prime ribs of Eastern steer beef, cooked in rock salt, served from the cart at your table with Idaho baked potato with chives, tossed salad, rolls and coffee,” it was priced to maybe lose a little bit of money in exchange for attracting gamblers.

The plan worked. Copycat casinos around town quickly followed suit and offered ground-scrapingly cheap competition. They served their versions of prime rib for breakfast, lunch, and dinner. By the late 1990s, the Aladdin had one for $5.95 and the Gold Coast clocked in at just $4.99. These days, venerable dens such as El Cortez and Ellis Island offer bargain beef for, respectively, $12.95 (there are also prime-rib-laced nachos, chili and mac-and-cheese) and $16.99 (for a 32-ounce monster). Fixings are included. And every buffet worth its considerable salt features freshly carved prime rib as a signifier of swank.

But it’s not been all super-cheap in Las Vegas. Lawry’s The Prime Rib has been doing its $51 off-Strip version—complete with spinning bowl salad and Yorkshire pudding—since 1997. The golden-age Golden Steer Steakhouse—where a private room is said to have once been a favored meeting spot for mobbed up casino bosses—has long had an upscale offering of the medium-rare meat ($65 for the 24-ounce Diamond Jim Cut). And the so-called gourmet rooms such as the Flamingo’s Candlelight Room and Sultan’s Table in the Dunes played up elegant presentations. Nevertheless, new-school versions—including the excellent American Wagyu at NoMad in Park MGM, which comes coated in porcini and black garlic—are upping the game and retooling the classic.

During a recent visit to freshly opened Mayfair at the Bellagio, where a floor show competes with slabs of prime rib for sheer spectacle, the meat was tender, slow-roasted for eight or so hours, perfectly marbled and sliced tableside. In terms of price ($77) and quality, it was not the hunk of protein that old-school Vegas denizens expect.

“The meat is from Mishima [Farms] in California; so it’s wagyu,” says Jake Leslie, general manager of Mayfair. “We tried 10 or 15 different types before deciding on this one. We season it with our blend of coriander, salt and black pepper—which is very classic. It’s cooked medium rare and hand-sliced from custom-made carts.”

As for the optimal meal at Mayfair, Leslie suggests keeping it old-school all the way: “Shrimp cocktail, Caesar salad, prime rib, and gambling for dessert.”

Over at the Palazzo tower of Venetian, Chang’s Majordomo employs a dry-aged and smoked version of prime rib, dubbed the Major Double Cut ($75) and coming from Creekstone Farms. After having it carved tableside (from a custom cart of his own), Chang dresses up the meat with a superior pommes purée and creamed spinach. The meat’s bone comes detached, fried, and crisped.

In the unlikely event you’re still hungry, top off your meal with one of the chef's juicy sliders, slapped down on King’s Hawaiian rolls and served at Moon Palace, directly across the way from Majordomo.

Taking new-style prime rib the furthest is Michael Symon at his Sara’s, located inside the Palms. Like Chang, he gets his meat from Creekstone, ages it, and smokes it. He serves it with fried bones as well, but he also “uses them as roasting racks in the smoker before crisping [the bones] in beef fat” and tosses them in salsa verde. Clearly, a side-by-side bone-tasting is in order.

Where Symon really takes his prime rib to the next level is via a trio of decadent augmentations that go beyond the classic horseradish and au jus (which all three places offer; NoMad serves its prime rib au poivre). “One topping is foie gras butter,” says Symon, adding that it’s made with poached foie that gets mixed into unsalted butter and sea-salt so that the mixture melts on the meat. “We also offer truffles, which are shaved on top, and crab béarnaise, which turns the dish into surf and turf.”

For all of that, though, Jake Leslie makes it clear that even the most haute prime rib innovations still throw back to the Last Frontier original. “You don’t change Vegas,” he says. “Vegas changes you.” 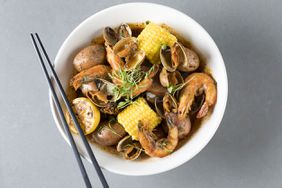 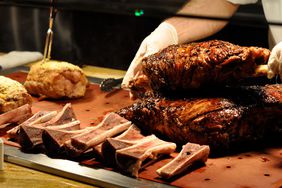