Whether you're craving neighborhood slice joints or neo-Neapolitan, NYC is still spoiled for choice.

Even though New York City can no longer technically claim to have the country's first pizzeria, there's no denying that the beloved dish brought here by early 20th-century Italian immigrants is intrinsic to this place.

How many people—New Yorkers, tourists, and passers-through of every borough—have fortified themselves with the steamy, cheesy staple since then? It's in the very foundations, and it has been from the moment Lombardi's grocery began cleverly hawking paper-wrapped tomato pies pragmatically bound with twine, according to the old yarn that's more or less become doctrine. As this guide showcases, you can find great pizza all over the U.S., but New York City's collective, unwavering allegiance to it is rooted deeper than any subway tunnel.

Beyond its illustrious, flour-caked history, one of the things that makes the city's pizza scene particularly blessed is that there are so many ways to enjoy it. Whether you're seeking out neighborhood slice joints with devoted followings, Neapolitan temples both modern and traditional flaunting their domed, wood-fired ovens, regional specialists catering to diners pining for far-flung cities like St. Louis, Detroit, and Chicago, or establishments turning out multiple types of Roman pizza (crisp rounds and rectangular pizza al taglio), NYC has an abundance of exceptional choices for pizza lovers. And that's to say nothing of the cracker-thin bar pies from Lee's Tavern on Staten Island; Bay Ridge mainstay Pizza Wagon's substantial, doughy Sicilian squares; and the wondrously light, distinguished offerings of talented bakers like Partybus Bakeshop's Jacqueline Eng, Jim Lahey of Sullivan Street Bakery, and Corner Slice pizzaiolos (and brothers) Mike and Pete Bergemann.

The city's pizza evolution has been fermenting gradually over decades, throughout which the appetite for pizza of all kinds—including a nobly undertaken overhaul of the archetypal New York slice—has ballooned like a curd-packed burrata ball bursting at the seams. In the pandemic, the eminently portable meal has buoyed pizza makers and hungry customers alike while life remains uncertain. Frenchette Bakery, which assumed the Tribeca office lobby digs of Arcade Bakery last fall, has followed in its forebear's footsteps selling chewy, yeasty pizzettes, though they now come adorned with luxe toppings like sturdy Spanish anchovies and boutique olive oil produced by Sicilian natural wine darling Arianna Occhipinti. And in December, chef Dan Kluger launched Washington Squares, a ghost kitchen dedicated to grandma pizza run out of his Greenwich Village restaurant Loring Place. Several other restaurant owners have also joined the fray.

Then there are the home bakers with brick-and-mortar aspirations like Miriam Weiskind, a Paulie Gee's acolyte and avid runner who started making pizza for her neighbors after getting furloughed last year. Weiskind, whose community-oriented endeavor is an homage to her late mother, quickly gained a flock of admirers from Brooklyn and beyond, offering gratis pies to those the pandemic has hit hardest, like first responders, teachers, and people who've lost their jobs. Her generosity in the face of adversity is yet more evidence that NYC will always be pizza's stateside home base, and a beacon for those who dream in dough, sauce, and cheese.

Following this meteoric rise, Weiskind has set her sights on "a small brick and mortar that is only a take-out window, partnering with a cookie baker. We will be a cookie bakery by day and a limited run pizzeria by night," she says. Using a custom-built truck, she hopes to balance "catering private bakes, popping up in the city and baking small runs three to four nights a week from a Brooklyn space."

Rockaways fixture Last Dragon Pizza is another apartment-bound operation developed in the wake of natural disaster (Hurricane Sandy, in this case). Owner and pizzaiola Nicole Russell has nourished her neighborhood via take-out and sold frozen pizzas nationally for years. Next up? A parlor of her very own. And in a move that seemingly brings the city's pizza story full circle, historic Naples pizzeria L'Antica Pizzeria da Michele is poised to open a Manhattan offshoot in the coming months.

The future, whatever it may hold, appears bright. Feel like celebrating with a slice? Here's where we'd fork over our dough.

At his eponymous Lower East Side pizzeria, native New Yorker Scarr Pimentel mills some of the flour for his dough himself, a bespoke touch that pays off in spades, yielding a crust that's toasty and tangy while flaunting a springy chewiness. That granular fact alone would be reason to seek out this retro downtown gem, but the pristine, nostalgic flavors coming out of Pimentel's gas-powered deck ovens are so perfectly in sync with the throwback, '70s-inspired aesthetic that a visit to Scarr's almost guarantees the grooviest of attitude adjustments. Go here. Eat pizza. Be happy. When you do, start with a NY-style slice for its supernal melding of cheese and an especially bright, pulpy tomato sauce, then level up with a Hotboi Sicilian, which involves jalapeños, cups of beef pepperoni, and generous splashes of Mike's Extra Hot Honey. scarrspizza.com

In late 2019, enterprising chefs Frank Falcinelli and Frank Castronovo took a converted garage in Carroll Gardens, Brooklyn, and, with help from some famous friends (Chris Bianco of Pizza Bianco in Phoenix and Tartine Bakery's Chad Robertson), made it one of the city's best new slice joints. The crisp, thin "regular cheese" slices and airy yet substantial Sicilian squares are exemplary, and with the Franks in charge, you can expect a changing roster of playful yet fastidious pies. One such stunner gets a psychedelic swirl of verdant basil pesto and garlic slivers, while another borrows from a popular pasta at their spot Frankie's 457 next door, combining nuggets of hot Italian sausage with floral fried sage and a generous, deeply satisfying drizzle of nutty brown butter. franks.pizza

If an impromptu trip to Naples isn't in the cards for you just yet, a visit to Austria Maldonado and Ciro Iovine's pocket-size corner pizzeria in Soho — with a clientele so full of boot-born expats that you're inevitably bound to hear fellow diners speaking Italian — will scratch that Tucci-induced itch. Jerseys and other memorabilia from Napoli football club are hung around the dining room with clothespins under an azure ceiling painted with clouds. Iovine, a Neapolitan expat who started tossing dough as a teenager, uses imported Italian ingredients for his puffy-edged, imperfectly round pies. Come here for a masterful margherita, but don't neglect specials like the montanara, a deep-fried pizza that gets a finishing sprinkle of grated Parmigiano Reggiano. songenapule.nyc

Make the trek to this Staten Island stalwart, which brothers Giuseppe and Pasquale Pappalardo opened in 1960 after emigrating to the Castleton Corners neighborhood from Naples, and you'll be rewarded with some of the finest thin-crust pizza New York City has to offer. The plain pie is a standard bearer, dappled with globs of melted fresh mozzarella mingling in a nicely acidic tomato sauce, but don't miss trying a slice of vodka pizza, in which the creamy, zingy perennial pasta topper works wonders on Joe & Pat's crust, which is so cracker-thin it's a marvel of gluten engineering. joeandpatsny.com

From the literal ashes of Aita Pizzeria (a fire tore through the place in 2019), Impasto has risen, reopening as a petite slice shop making impressive Roman-style pizza al taglio baked with an extensive array of toppings, including seasonal specials. The restaurant takes its name from a painting technique in which the paint is piled on in thick layers, creating an almost 3D effect. On a sleepy block in Clinton Hill, the team led by Roberto Aita sends out trays of square pizza that run the gamut from simply satisfying buffalo mozzarella with basil to more whimsical creations, like a riff on a tuna melt featuring Sicilian fish, aioli, capers, and pickled onions. The crusts have a focaccia-like bounce with deeply browned edges, while the interiors have the aroma of high quality bread. impastonyc.com

As famous for its pillowy Sicilian pies as it is for its namesake frozen dessert combining chocolate, pistachio, and cremolata (almond-spiced vanilla) into an icy, psychedelic collage, this landmark Gravesend pizzeria has been a summertime destination since 1939. Square slices here have real height and heft, sporting crunchy, nearly fried crusts and yeasty, just-baked interiors that are unconventionally layered with slices of mozzarella first, then topped with ladles of savory, richly herbal sauce and a generous showering of grated cheese. Despite their bulk, they're almost too easy to devour. Haters will tell you to skip the triangle slices, but as at quintessential Howard Beach icon New Park Pizza, the trick is to ask for it well-done. spumonigardens.com

Brothers Cosimo and John Tiso took the reins from original owner Ernie Ottuso (immortalized via a street sign at the Pelham Bay pizzeria's corner intersection) after working there for years, starting in their teens. Tucked away in the basement of a small house, the unassuming slice joint has served faithful locals and determined pizza pilgrims for nearly 75 years, 62 of them at this location. White pies are dotted with veritable lakes of warm ricotta, while the plain cheese pizza balances a gently sweet tomato sauce with Wisconsin mozzarella and sharp grated cheese on an exemplary thin crust. To either of them, consider adding tender nuggets of sweet, fennel-forward pork sausage from S & D Deli down the street. The Tisos also sell frozen plain and pepperoni rounds to-go. louieandernies.com

A Greenwich Village institution steeped in nearly 100 years of history — ever since pizzaiolo John Sasso left Lombardi's to strike out on his own in 1929 — John's is one of America's oldest pizzerias (third oldest in NYC if we're counting). Really, it's part pizzeria, part museum; the walls, tabletops, and booths in the split dining rooms covered in the spirited etchings of voracious diners past and present. Eschewing slices for a pies-only policy leads to long waits, but the faintly smoky coal-fired pizza is well worth the periodic gridlock. Beyond the admirably crunchy and charred thin crust, it's the way the milky mozzarella and piquantly sweet sauce extend to the very edges of each hand-stretched pie that makes the offerings here sing. johnsofbleecker.com 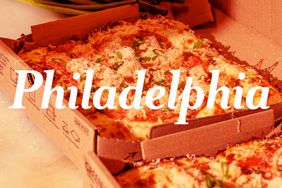 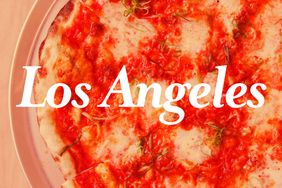 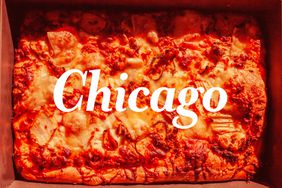 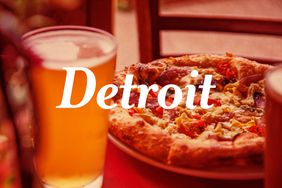 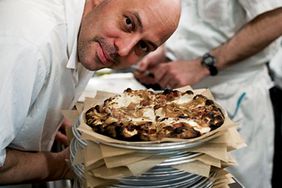 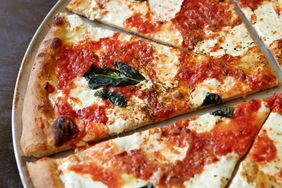 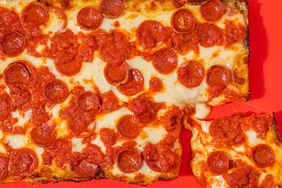