"It's as common as a burger joint in America," explains beloved Philadelphia-based chef and restaurateur Michael Solomonov of a shipudiya, the grill-focused, vegetable-forward Israeli dining concept that inspired his restaurant, Laser Wolf.

Taking over a 3,700-square-foot warehouse in Philly's hip Kensington neighborhood, Solomonov — along with partner Steve Cook — opened the first Laser Wolf in 2020, unveiling a spunky, industrial eatery decked out with round paper lanterns, turquoise-hued walls, and tables dressed with retro oilcloths bearing colorful prints of oranges and cherries. In 2022, the duo opened a second location, Laser Wolf Brooklyn, on the rooftop of The Hoxton in Williamsburg.

"At this point, we're not introducing Israeli food for the first time," said the chef, who is credited with helping to boost the national profile of hummus, pita, and more dishes from his home country. In 2008, Solomonov launched Philadelphia's Israeli restaurant Zahav, serving dishes like fried cauliflower with labneh and lamb merguez, to wide critical acclaim, and since then he has won seven James Beard Awards.

Over the last decade-plus, Philly and more major dining cities have seen an influx of Middle Eastern-inspired concepts, which is why Solomonov felt it was time to push the genre even further. But that doesn't mean dry ice and liquid nitrogen. In fact, said Solomonov, "We're actually simplifying: stripping down our menu to really showcase the heart of Israeli cuisine."

Enter: the shipudiya. Similar to the American diner in the sense that this typically no-frills neighborhood eatery caters to a crossroads of diners, the shipudiya is Israel's heart and soul, a communal gathering place embraced by all.

"It's where you stop by and see everyone you know," said Solomonov, adding that shipudiyas are "happy, lively, interactive places all about sharing food."

Here's how it works. Patrons first pick a protein — be it a skewered Bulgarian beef kebab, a whole trout, or even an eggplant — and that singular price includes a swath of small salads not dissimilar from the banchan that function as a precursor to a Korean barbecue meal. Think kale babaganoush, Israeli pickles, and sweet potato muhammara. And since French fries are a popular side dish in Israel, the team is offering that option, in addition to a wack of foie gras marinated with pineapple and Baharat spice, grilled and served over half a pita.

Beyond salads and sides, Henshaw grills his meat, fish, and vegetable entrees over a sustainable type of charcoal made from coconut at around 900°F; said Cook, "It burns slowly and adds a mild, clean smoky flavor to whatever it's cooking." Meanwhile, bright and fresh citrus-driven cocktails helmed by general manager Kailey Jenkins add a punchy complement to Henshaw's pared-down fare. Think the Tel Aviv with gin, cardamom-lime cordial, and cava; and Crime of Passion, a blend of rums spiked with passion fruit and Maraschino.

Solomonov and Cook signed on Boxwood Architects (also responsible for K'Far and Merkaz) to create the interiors. Unfinished walls and an open ceiling, along with a glowing deli case illuminating skewers, lend a sense of casualness, while yellow and purple patterned wallpaper kick up the kitsch. The ambiance perfectly captures the energy and soul of the buzzy kebab stalls that line Jerusalem's Machane Yehuda Market — smoky air and all. 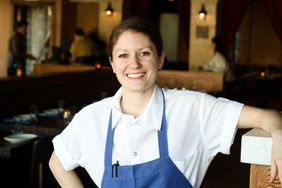 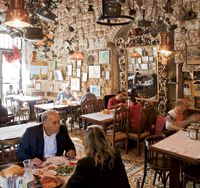 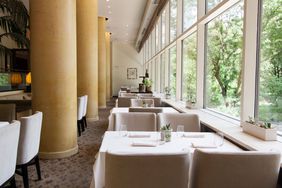