La Vang-Herr is on a mission to turn heads toward Hmong-American cooking.

At first, you might not think much of the small food truck in the back corner of an unassuming parking lot, tucked behind a Little Caesars. You might even miss it as you drive 20 minutes west of Portland, Oregon, beyond the Nike headquarters in Beaverton, to the little town of Aloha. But to skip over @La’s, a Hmong Food Cart would mean missing not only some of the best Hmong cooking in the nation but also the starting point of what La Vang-Herr, the force behind @La’s, hopes will be a national Hmong food movement.

Like many Hmong Americans, Vang-Herr and her family came to the United States as refugees in 1978 as a consequence of the Vietnam War. They arrived in Dallas before settling down in Milwaukee, in a tight-knit Hmong community where food was central to every major life event. When she moved to Oregon in 2015 to be with her husband, Steve, she was shocked by how hard it was to find Hmong restaurants and some of the ingredients she loved the most, despite the sizable Hmong population throughout the Pacific Northwest.

Over dinner one night, a friend who knew that Vang-Herr had long been an avid cook planted the idea of her opening her own Hmong restaurant. “She told me, ‘You know, you’re so passionate about our culture. Lead the way,’” Vang-Herr recalls. In 2017, she left her job as the development director for a non-profit, and a year later, she opened her food cart.

People flock to @La’s for her menu of Hmong classics with a few twists. Perhaps the most beloved item are her Phat Wings; her chicken wings are deboned and stuffed generously with a mixture of slippery glass noodles, carrots, mushrooms, and two kinds of ground meat—turkey and pork—then fried until crackly and crisp. These wings, like most items from Vang-Herr’s truck, are served snuggled up next to a pile of sticky rice. On a sunny day this past February, @La’s special was a dish called ncuav, a mochi-like cake made from sticky rice. Ncuav is traditionally cooked in banana leaves, but Vang-Herr adapted the dish to her food cart and pan-fried the rice paste into crispy triangles with crunchy exteriors and molten middles, which she serves with a very American accompaniment—maple syrup.

The star of the cart, however, is the Hmong sausage, made from a secret recipe that Vang-Herr doesn’t divulge, revealing only that it’s made with juicy ground pork and aromatics like ginger and lemongrass. At first, Vang-Herr and her husband attempted to make the sausages by hand, but they have since entrusted a local butcher to make them using her recipe. Back at the cart, Vang-Herr grills the sausages until they are charred and snappy and serves them with the requisite sticky rice, plus a fiery green chile hot sauce she calls “pepper dip.”

Although Steve is a field service engineer by day, the pepper dip is his responsibility. Vang-Herr and her family live on eight acres of land, some of which is dedicated to crops used in Southeast Asian cooking, like cilantro, mustard greens, and, of course, the peppers for their dip. Setting up a farm is a return to the Hmong way of life, for which farming is critical, says Vang-Herr, whose family hails from northern Laos.

The couple also use some of their land to raise a brood of chickens. Vang-Herr’s otherwise measured demeanor becomes animated when she talks about her birds; the majority are breeds from Southeast Asia, but her most prized are a stunning blue-and-black type known as Hmong chickens. “They are more or less an heirloom now,” she explains. “When the Hmong people fled Southeast Asia and immigrated to this country, [chickens] were one of the few things they took with them.” These chickens are much leaner than American birds and are a treasured connection for Vang-Herr to her lost homeland.

In many ways, the cart is just a starting point for Vang-Herr, who hopes that Hmong food will be just as well-known as Thai and Vietnamese food one day. She has plans to transform the farm into a business where people can come pick their own Southeast Asian vegetables and learn to make dishes like Hmong pickles. Throughout the farm, Vang-Herr is looking to build traditional sun shelters, like the kind found in Laos, so that visitors can immerse themselves in Hmong traditions. “I always say to people that @La’s is not a food cart,” says Vang-Herr. “It’s a way to preserve our culture and stay true to our history.”

Fragrant lemongrass and galangal add brightness and balance to the savory-sweet sauce that coats tender pork belly. Searing the pork in batches ensures the meat browns while the fat renders.

Get the Recipe: Nqaj Qaab Zib (Sweet Pork)
Was this page helpful?
Thanks for your feedback!
Tell us why!
Related Articles 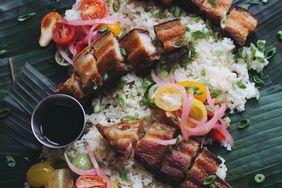 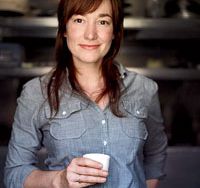