At Da Lat Rose, the upscale Vietnamese tasting-menu restaurant that opens to the public in Beverly Hills on November 6, fusion pioneer Helene An’s famous garlic noodles have undergone a glam makeover. During a recent preview of the restaurant, the noodles are topped with a dollop of Santa Barbara uni and a touch of 24-karat gold. Then, executive chef Tony Nguyen vigorously shaves black truffles over the noodles tableside.

Da Lat Rose is a “gastrobiography” of An. The menu has something like chapter headings that correspond with each dish. The one for the garlic noodles is The American Dream. This gilded dish is meant to remind you that so much of America and its restaurant industry has been built by people who came here with nothing.

An, who is 75, has been in the restaurant business for more than 40 years after fleeing to the United States as a refugee, so she’s been thinking about retirement. She’s prepared to hand over the reins in the kitchen to 32-year-old Nguyen, who’s worked for her since he was 25. She knows that her daughters, led by CEO Elizabeth, are capable of running the business. She’s happy that her cooking has led to a multi-generational empire that also includes her 25-year-old granddaughter Bosilika, who helped develop Da Lat Rose.

So even though Nguyen says he doesn’t believe that this is An’s last restaurant, Da Lat Rose feels like her mic drop.

“I want to share my life and my story with everyone,” An says. “My family had to run everywhere to hide.”

The 12-course meals at Da Lat Rose start in a lounge area inspired by tiny street-corner bars in Vietnam that serve fresh draft beer and snacks. A remarkable dish featuring bamboo rice and a chicken oyster cooked with lime leaf is a nod to how An, who was born into aristocracy, had to hide in plantations with her family during and after World War II. Your waiter at Da Lat Rose might elaborate and explain that An used to brandish a bamboo stick whittled into a shiv for self-protection.

Things improved a few years after the war ended.

An was 11 and on the run again. Her family fled to Saigon, where her father got sick. But then they moved to Da Lat, a lush lakefront city where the weather was wondrous and fruits and vegetables grew year-round. Her father recovered. An went to a fancy private school where “only aristocrats can go.” She also studied at a monastery.

Later, she married an industrialist who was so wealthy that they had three chefs in their Saigon home: one who cooked Vietnamese food, another who cooked French food, and another who cooked Chinese food. An and her husband Danny raised three daughters in prosperity. But in 1975 after the fall of Saigon, it was time for her to run again.

After stops in Guam and Camp Pendleton, An ended up in San Francisco, where her mother-in-law, Diana, had purchased a deli. An asked for permission to change the menu, and she came up with her garlic noodles after thinking about how her American friends loved to eat pasta. An wanted to make something lighter that didn’t rely on cream and tomato sauce, and she had learned to appreciate the medicinal qualities of garlic while studying Eastern medicine in Da Lat.

An, who had no formal culinary training but had carefully observed her mother and sisters in the kitchen as a child, put Vietnamese flavors into her noodles. But she realized that she should dial down the fish sauce for her American customers. She used French technique that she had picked up from watching her French chef make sauces.

“I have to say that I’m very lucky," she says. "When I came here, I lost everything. I never had anything to do with cooking. My parents made me go to school, so I never had a chance to do anything. But when I came to San Francisco, I had to work with my mother-in-law.”

Now, more than four decades later, An is in Beverly Hills, at Da Lat Rose, a $225-per-person tasting-menu destination that’s above her popular Crustacean restaurant. This is where she’s affectionately known as Mama, a lovable but fierce leader who knows there’s no reason to hold anything back as she shares her story.

So An and Nguyen are elevating bánh xèo by filling the savory pancakes with escargot and A5 tallow. They’re serving a glorious spot-prawn satay that you dip into a candle made out of butter. They’ve got lots of surprises and tableside presentations at Da Lat Rose, where one dish involves king crab and caviar while another upgrades a classic beef stew with Snake River Farms wagyu.

“Bò kho is very much a peasant stew,” Nguyen says of the dish that inspired Da Lat Rose’s rarefied wagyu course, called The Legacy Lives On. “You use the cheapest cut of meat you have, and you cook it for hours just like any other culture. But this one has cinnamon, star anise, and tomato paste.”

An says she has never wanted to be a celebrity chef and that everything she’s ever done has been about taking care of her family. She wanted to put her daughters through school and allow them to make their own money and decisions, so she did. The way she sees it, her family also includes Nguyen and the other young cooks who’ve forged their careers in her kitchens. She says she wants to continue mentoring them and would love to fund their future restaurants. She knows she can move on from cooking and be proud of what she’s built.

“Really, I feel tired,” she says. “But I try to support my daughters and chef Tony. We want everybody to work together and support chef Tony, so we can open more and more restaurants. But if I can retire, I prefer that.”

An still looks vibrant and strong when we speak, but one thing she doesn’t tell many people is that she recently went through cancer treatment. She says she has completed her treatment and is doing better now, but she stresses that she needs to visit her doctor for regular follow-ups. One thing that her life has taught her is that you’re never really out of the woods.

“He’s very good, very talented, and very creative, so I trust I can pass it to him,” she says. “I have to pass it on. Whatever I think I can do and whatever I learned from life, I want to pass it to him. I just want chef Tony to be with me forever. If he ever opens his own restaurant, I want to be the first one to invest.”

“She always makes me want to cry,” Nguyen says. “Mama is just being modest. We always need Mama.”

Nguyen doesn’t cry when he says this. Instead, he laughs and gives An a loving look. He talks about how he traveled throughout Vietnam and the United States and couldn’t find a “Vietnamese tasting-menu restaurant that was done correctly.”

So once again, An is here to create a new cuisine.

“Nobody is doing high-end Vietnamese like this yet,” she says. “We want to make sure we do it right.” 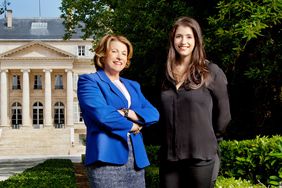