"Mexique has always been very special for me. It put me on the map," Gaytán said of his first restaurant — the one he earned a Michelin star for. "It was difficult to close. It hurt. But it's something I'll always be grateful for and will forever carry Mexique in my heart."

The same week Gaytán announced the close of Mexique, and left for Mexico, he promised to come back to Chicago. A year later, via a cryptic Instagram post in May 2018, Gaytán announced his return with Tzuco, which opened in September 2019 in the Gold Coast neighborhood and kicked off the chef's ambitious comeback. He also opened two additional concepts — Panango, a bakery that specialized in Mexican pastries, and a private tasting menu experience, "Tales of Carlos Gaytán," which focused on foods from the chef's personal travels — though they eventually closed.

The name of his latest eatery is short for Huitzuco — his hometown and the place where he learned to cook alongside his mother, Doña Teté. His family was poor and they made a living by selling her cooking in town. It was a hard life that required hunting wild game, foraging in nearby fields, and overnight shifts to prepare the large batch of meals. By the time he became a teenager, Gaytán had mastered the art of slaughtering and dismantling a goat. The older he got, the more obvious it became that he had no career prospects in the place he was born. Dreaming of a life bigger than what was in front of him, Gaytán decided to go to the United States. Using a friend's passport, he arrived in the suburbs of Chicago and began his new career as a dishwasher at the Sheraton North Shore Hotel.

He would arrive early for his job and leave late. This caught the attention of Jeff Miller, the former hotel chef who took Gaytán under his wing and taught him culinary skills. Eventually, Gaytán became chef garde manger. He left the hotel for a similar post with the Union League Club of Chicago, a premier private club in the nation. In 2004, he became chef de cuisine at Bistrot Margot, where he worked with French Chef Dominique Tougne. There, Gaytán learned the art and precision of French cooking.

In May 2008, Gaytán opened Mexique in West Town, which, back then, was known more for its crime rate than its food scene. The menu was unlike what most people associated with Mexican cuisine at the time. There were no margaritas, beans, or guacamole in sight. Instead, diners found themselves with options such as mahi pozole verde, pea tamal, and escolar in a spicy romesco sauce topped with a poached egg. His offerings — Mexican food fused with French cooking techniques — reflected his cooking career.

The food was a risk. The location was less than ideal. The business suffered. On the day before he received news of his Michelin star in 2013, Mexique had only 11 customers and Gaytán was considering closing his restaurant. The accolade turned his business around and sparked an immediate rise in reservations. It bought him time. He became the first Mexican chef to earn the honor and held onto it for another year.

But by 2015, Mexique had lost the coveted Michelin star and it would be another year before the neighborhood began to show signs of becoming the booming culinary destination it's now known as. That's the problem with visionaries — sometimes they show up before their time.

Gaytán seems to be learning from his past. Tzuco, which opened in September 2019, is no longer the hidden gem tucked away in the far reaches of the city. It is nestled in the swanky Gold Coast neighborhood full of hotels, a busy shopping district, and celebrity residents. It seats 110 and boasts an al fresco dining option. Guests can expect a variety of seafood — shrimp, clams, octopus, and salmon — chicken, pork, tortilla, and lentils flavored with spices and chile.

Upscale Mexican food is no longer an anomaly. Diners have expanded their purview and palates. Global dining destinations such as Mi Tocaya, Quintonil, and Cosme — all of which opened after Mexique — are examples of how chefs have risen to meet the demand.

Gaytán's roster of talent includes chef de cuisine Andrew Kim from Avec, The Dearborn, Acadia, and Takashi. Imported from south of the border is Pastry Chef Jesús Escalera, heralded as Latin America's Best Pastry Chef in the 2018 list of the World's 50 Best Restaurants. Heading up the beverage program is Mica Rousseau, named Mexico's 2016 finest mixologist in the World Class competition, which brings the best talent in the world to compete.

Gaytán recalls a conversation he had with his daughter, Caliani, when he was deciding to close Mexique and return to Mexico.

"She said 'everyone loves you [in Mexico]. As soon as you open a place it's going to be packed and you're going to be successful. But, you like a challenge. If you stay in Chicago you're going to have to work really hard and it's not going to be easy, but that will be the best for you.' So I said, I'll take the challenge." 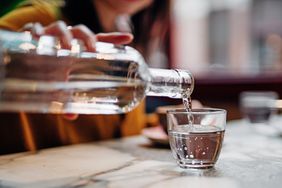 Dave Beran Is Keeping His Head Above Water