For those looking to drop a dramatic amount of money on dinner—whether for a showy business meeting, or an anniversary, or a rare, calculated splurge—sushi is often the answer. With the emphasis that high-end sushi restaurants put on sourcing their ingredients, and the rigorous training that often goes into the craft of sushi preparation, prices at a certain type of place can skyrocket—especially if you're going for the omakase (chef's tasting) menu, and especially if you add on a wagyu beef supplement or a sake pairing. That's not to say that it's not worth it. These are the 20 priciest—and some of the most delicious—sushi restaurants in the country. —Marian Bull

At Hiroyuki Urasawa’s sushi bar in Beverly Hills, your $395 omakase menu comes with strict instructions: you must eat every piece of sushi presented to you within ten seconds. Urasawa was once a student of Masa’s Takayama, so it makes sense that he’d follow his teacher, in terms of both price and quality. LA Times critic Jonathan Gold has sung its praises for years—if your wallet is big enough, the trip is certainly worth it.

This longstanding Manhattan restaurant isn’t the first sushi bar named Kurumazushi that Chef Toshihiro Uezu has worked at—in fact, it takes its name from the restaurant where he first got his training, near Tokyo’s world famous Tsukiji Fish Market. Its location is unassuming: It sits on the second floor of an office building in Midtown, but don’t let that deter you. Here, an omakase dinner starts at $300, but there are a la carte options as well; the toro is a standout.

While Boston is better known for its clam chowder and lobstah by the pound, James Beard Award-winning chef Tim Cushman is making very elegant—and very modern—sushi, at his little restaurant tucked away in the Leather District. Here, $285 will get you a grand omakase that includes both sushi and composed dishes, like the “Fabergé” Onsen Egg: black river ossetra caviar, gold leaf, dashi sauce, and green onion.

While the basic omakase here runs you a measly $105, their priciest tasting menu comes in at $225. Chef Sungchul Shim was born in Korea and educated at the CIA in New York, then most recently worked in the kitchen at Per Se, a pedigree decidedly different from many of his peers on this list. You’ll see a good few nontraditional elements throughout the restaurant: a focus on US-caught fish, and a section of the a la carte menu dedicated to vegetables, for instance. But serious sushi obsessives are still flocking here for the standard fare.

In a quiet corner of a very loud city, Chef Kevin Cory serves just 16 guests per night: two seatings of eight guests each. The omakase menu, which changes nightly, costs $200, and you can pair it with sake from chef Cory’s family distillery. In 2013 the restaurant won a Forbes Travel Guide Five-Star Award, but it’s surprisingly unfussy given Miami’s glitz and the restaurant’s price point: One of the suggested Google autofills after “Naoe Miami” is “dress code,” but Naoe keeps things decidedly casual—there’s no dress code here.

Nobu is a multi-city sushi empire that has a quote from Madonna on its website. Specifically, she says, “You can tell how much fun a city is going to be if Nobu has a restaurant in it.” Apparently Miami is fun! It’s also a place where you can go to Nobu and spend $200 on an omakase menu inside the Eden Roc Hotel, in a dining room that’s the exact opposite of Manhattan’s hyper-minimalist counters: the design is opulent and verging on gaudy.

While the standard omakase here starts at $115, the premium omakase menu averages between $170 and $180, according to the restaurant. While the original chef—chef Mori—is no longer preparing the sushi, the restaurant still makes its own tofu and soy sauce in-house, a testament to its commitment to quality.

Omakase dinner at this recently opened, minimalist spot will run you $165 before tax, tip, or drinks. Like Ichimura in New York City, it leans hard into Edomae-style sushi, which treats the flavor of a piece of fish as its ultimate pursuit, often relying on curing and pickling to maximize the taste of a single cut. For those interested in a less expensive taste of chef Hiroyuki Naruke’s work, lunch omakase is available for $75.

Kosaka is the latest addition to New York’s omakase rotation: A West Village operation manned by chef Yoshihiko Kousaka, who sources his fish from New York City and Tokyo’s esteemed Tsukiji fish market. While the simplest omakase will only run you $125, there’s also a $155 option that includes a few hot dishes. The matcha pudding for dessert is expectedly on-trend.

This is the only sushi restaurant in New York that currently holds four stars from the New York Times, awarded by Pete Wells in 2013—who described his experiences dining there as the “most enjoyable and eye-opening sushi meals I have ever eaten.” Given this fact, the omakase price of $150 seems almost too reasonable. It’s doled out by Daisuke Nakazawa, a protege of Tokyo’s Jiro Ono, who appeared prominently in the documentary Jiro Dreams of Sushi. (“Mr. Nakazawa must have learned something,” Wells wrote in his review.)

Sushi Zo is a well-loved Los Angeles sushi spot hidden away in a strip mall that serves a $145 omakase and only a $145 omakase. Zo, its downtown sister, is a little more modern in its decor, but it’s still minimalist, and it still costs $145.

Sure, you might not head to Aspen expecting a fine omakase meal, but the town breeds luxury, and with that, sushi. The “Chef’s Daily Creations” menu will run you $175, and it includes chef Nobu Matsuhisa’s signature fusion of Japanese and South American cuisines (plenty of sea bass and a house garlic sauce). There’s also an a la carte menu, for those in search of a little less commitment.

Central to this Japanese restaurant in San Francisco’s financial district is a Robata grill—not exactly a hallmark of your typical sushi restaurant. But Roka Akor, which also has locations in Scottsdale and Chicago, isn’t sushi-only. It also offers a wide variety of Japanese food: grilled Wagyu filets, requisite edamame, salmon teriyake, and a $138 omakase menu. Whatever you do, be sure to keep an eye out for the dessert platter ($18 a la carte), which comes, fittingly, on ice.

Shuko is a relative newcomer to Manhattan’s sushi scene—it opened at the tail end of 2014. Omakase begins at $135, with an optional $75 beverage pairing; the Kaiseki menu, which includes plated dishes, will run you just $40 more: it starts at $175, and the pairing costs an additional $125. The sashimi here isn’t strictly traditional; as Eater critic Ryan Sutton mentioned in his review, chef Nick Kim will often serve you a sole piece of sushi before offering it atop rice, to acquaint you with the flavor. But the food is still prepared with care and precision, in a beautiful environment.

This quiet spot in north Chicago has been around for almost 30 years now, and is a reliable source of quality sushi in a city that loves its seafood. Its omakase menu runs up to $180—that’s the option that includes both sushi and sashimi—but it starts at $120. Like some of his peers in New York and L.A., chef Katsu Imamura often sources his fish from Tokyo’s Tsukiji market. If you’re looking for a classic in Chicago, look no further.

This (literally) underground gem in TriBeCa earned a Michelin star in 2007, serving traditional Edo-Mae sushi alongside artfully composed dishes. Their omakase courses start at $120, but can run up to $200—before drinks—if you’re looking for lobster tail and an uni tasting tucked in among the rest of your meal.

The omakase here is quite reasonable compared to the other restaurants on this list—it starts at just $80—but can creep up past $100 with certain additions if you opt for the fancy stuff. The blow-out option is the $245 Surf ‘n Turf kaiseki tasting, featuring wagyu carpaccio and lobster and a sake pairing to boot. Taro is one of the district’s highest-regarded sushi restaurants, so whether you go all-out with wagyu or keep your purse strings tight, you’re in good hands. 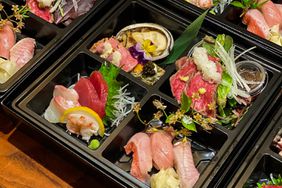