Throughout the 20th century, the population of Castiglioncello del Trinoro shrank from hundreds to about a dozen. Perched atop a hill in the UNESCO World Heritage site Val d'Orcia, the charming medieval town has ancient roots, but most of its residents left after World War II, leaving behind empty buildings and abandoned roads.

Throughout a decade of painstaking restoration work, a boutique hotel called Monteverdi Tuscany has brought life back to the once-empty village, restoring much of its architecture with natural reclaimed materials from the surrounding region, and without changing its characteristic facades (so the view from the valley remains the same as it has for centuries). After undergoing a significant expansion in 2022, the property continues to lure back locals and tourists alike with art events, luxe accommodations, and gorgeous views of Val d'Orcia. But it's worth making the trip for the food alone.

With a world-class spa perched above a golden stretch of farm-dotted valley, as well as serene, lush gardens throughout, Monteverdi is an ideal destination for the relaxation-seeking traveler. It's even more ideal, however, for people whose preferred mode of relaxation involves eating. In addition to dining venues spotlighting hyper-local ingredients, including fine-dining concept Oreade, the Lobby Lounge & Terrace Bar, the cozy Library Bar, and forthcoming Zita (which executive chef Giancarla Bodoni opens in 2023), the property has an on-site culinary academy, housed in a charming, centuries-old school building.

The space, located just below Castiglioncello's quaint piazza, features a teaching kitchen with work stations for up to 12 students, as well as indoor and outdoor dining space. Guests at Monteverdi can take classes with chef Bodoni, who teaches how to make fresh pasta and classic Tuscan dishes. The academy also hosts the Chef's Table, where guests can experience Bodoni's cooking in an intimate five-course dinner with wine pairings.

On a recent trip to Monteverdi, I drank the best spritz of my life at the charming, book-filled Library Bar, which has a window framing the rolling hills that surround the property. Rather than the more common Aperol or Campari, the spritz featured Santoni Aperit, a beautifully bitter liqueur made just a town over by Gabriello Santoni in Chianciano Terme. Topped off with Bortolotti prosecco and soda water, with a healthy garnish of thyme from the culinary garden, the cocktail effortlessly showcased the Monteverdi culinary ethos: privileging ingredients from right here above all else.

Even at the fine-dining concept, Oreade, which reimagines traditional Tuscan dishes in genre-bending ways, each ingredient rooted the cooking to this very specific, very special place: the organic Tuscan olive oil on the table from Podere Ricavo, the phenomenal pecorino sardi from the farm down the road, Caseificio Piu, the perfect local watermelon, cubed in a salad with creamy burrata.

Monteverdi was founded in 2012 by American lawyer and professor Michael L. Cioffi, who had come across the town virtually abandoned during a trip through Tuscany. After years of restoration work and collaboration with the renowned architect and interior designer Ilaria Miani, the hotel is now elegantly integrated into the village, with 20 village rooms, village suites and Tuscan view suites. There are also three private village houses, which boast several bedrooms and full kitchens. Bodoni says that the property aims to continue expanding its culinary garden and on-site production, perhaps bringing on some cattle and chickens.

"When you respect nature, we all benefit," she said. When Bodoni opens Zita in 2023, she aims to bring even more attention to the natural resources of the area, while shining a light on its lesser known history – including the enormous Sardinian influence.

"I love shedding a light on the Sardinian presence in Tuscany," she said, noting the community of agricultural workers that emigrated to the region after the war. She plans on serving a playful "Sardinian burrito," made using softened pane carasau — a favorite bread of Sardinian shepherds – wrapped around tender braised lamb. "I love traditional but fun food."

At dinner with chef Bodoni in Muri Antichi, one of the village houses that can also host private events, a server in his twenties told me his grandfather used to run the town's shoe store before he left. "When I was a child, only four or five people were living here," he said. He finds working here now – the buildings restored, the gardens full of life again, and people in the streets – to be quite meaningful. 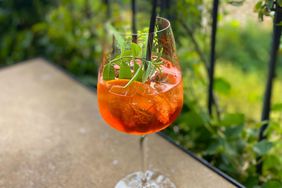 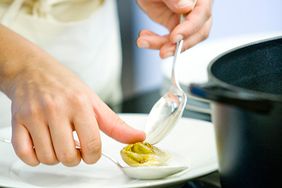