Taste your way through the region’s world-class wine, whiskey, cider, and beer in one relaxing weekend.

Set in the Blue Ridge mountains, only about 25 miles west of Washington, D.C., Virginia's Loudoun County feels as tranquil and unhurried as the capital does bureaucratic and bustling. The region is home to historic stone mansions and horse stables, rolling green fields, and notably rich soil. In fact, according to some of the area's local farmers, it ranks among the best topsoil in the country, making it a prime spot for growing grapes for winemaking, wheat and corn for brewing beer and distilling spirits, and apples for making cider. That many of these wine (and beer, spirit, and cider) producers also have tasting rooms with a backdrop of the verdant landscape is a nice bonus.

It would be perfectly reasonable to plan a whole visit around a reservation at Beverly Morton Billand's Restaurant at Patowmack Farm—opened in 1997 and one of the first of its kind in the country—where some ingredients are picked fresh from the fields hours before they're on the plate. But whether or not you nab a table, there are plenty of reasons to make the trip. Located just an hour from the capital city, spend a weekend sipping your way through DC's wine region.

Find a central (and stunning) homebase in Middleburg, Virginia, at the Salamander Resort & Spa. Situated on 340 acres, the resort feels at once peaceful and restorative (see: gem of an outdoor pool, the 23,000-square-foot spa) and relentlessly entertaining, with a range of offerings that include tennis courts, nature trails, and a zip-lining course. Equestrian programming like trail rides and riding lessons are also on offer out of the pristine horse stable on property. Non-riders can visit the stables to meet Cupcake, the miniature horse.

Kick off the day at Chrysalis Vineyards—in the center of the Ag District, about a ten minute drive from the Salamander—which happens to be the world's largest planter of Norton grapes. Owner Jennifer McCloud makes award-winning dry red wine with the native Virginia grape, plus Petit Manseng and a roster of other wines, housemade cheeses, and breads. While tastings are on hold during the pandemic, you can order a flight of four wines from among their lineup.

From there, make your way to historic downtown Purcellville, to find Catoctin Creek Distillery, where master distiller Becky Harris makes Virginia's most awarded whisky. Order a tasting of their signature spirits including Roundstone Rye 80 proof, or for $18.50, three mini cocktails featuring their whiskey and gin. While you're in town, peruse boutiques like Nostalgia for stylishly-curated vintage threads spanning the 1920s to 80s, then stroll over to Tipped Cow Creamery for a few scoops of handmade blackberry or fresh mint chocolate chip.

About five minutes by car, find Walsh Family Wine. Founded in 2014, Nate and Sarah Walsh opened their LEED-certified tasting room and winery in 2019. With a range of red and white varietals growing on 50 acres of Loudoun county land, the couple is making sought-after wines. You can sample some at the tasting room during a self-guided flight.

For lunch, head to nearby Wheatland Spring Farm + Brewery. Neighbors Bonnie and John Branding are brewing land beer using grains, herbs, and fruit grown on site, as well as wild-captured yeast. Order pulled pork, paired with a Harvest 2020 farmhouse ale made with estate honey, or whatever's on tap, and find a seat at one of the picnic tables situated under sun-shading sails. In chillier weather, take cover inside the 1870s barn.

Wind down the day in downtown Middleburg, which holds the dignified distinction of being the nation's "horse and hunt" capital. Snag a table outside at King Street Oyster Bar during happy hour, between 3-6:30 p,m, daily, for buck a shuck oysters, house punch, and $5 plates of crab cake sliders.

Fuel up at Common Grounds, the coffee shop on the town's quaint main street, slinging breakfast sandwiches on ciabatta, before starting the day at Lost Barrel Brewing. Take the $25 brewer's experience tour for an up-close view of the brewhouse operations, finished with a seated tasting of beers like the Belgian-style Farm Ale and Wild Berry Sour. From there, make the 25 minute trip to the family-run trio of makers: Henway Hard Cider company, Bluemont Vineyard, and Dirt Farm Brewery.

At Henway, taste on-tap ciders, from the crisp, dry Brut to aromatic Blueberry Lavender, alongside homemade pimento cheese and crackers. A few minutes away, visit Bluemont to sip a seasonal tasting flight—including the peach wine made from their own farm-grown fruit—out to the expansive patio overlooking the Blue Ridge Mountains. On weekends in September, for $35 you can also channel I Love Lucy at the annual Crush With Us grape stomping experience. Finish at Dirt Farm, where brewed-on-site beers are only eclipsed by the view of uninterrupted farmland and mountains from umbrella-shaded patio tables. The brewery also hosts regular events like beer dinners and live music.

On the way back toward the resort, drive the scenic Snickersville Turnpike. The one-time Iroquis hunting trail traversed by George Washington is a historic state byway. It's particularly beautiful in the fall when the leaves change color, but anytime of year, look out for Victorian-era farmhouses, stone walls and bridges, and generally soak up the region's charms. Don't miss the Philomont general store, open since 1913 and selling sandwiches, coffee, and some locally-made provisions like Virginia salt and pepper peanuts.

Making your way back to the Salamander, stop into Cana Vineyards & Winery to sample a glass of zippy Albariño made by Melanie Natoli, who took home the title of winemaker of the year at the International Women's Wine competition. Return to the resort for dinner at Harrimans Virginia Piedmont grill. Request a table on the patio for views of the lush grounds (and to catch a glimpse of the resident miniature horse, Cupcake, grazing in the distance.)

On the menu find steak and seafood dishes, plus local cheeses, honey harvested on-property, and produce from the culinary garden, just a few hundred feet away from your table. And for wine pairings, including from a thoughtful selection of local producers, turn to sommelier Catherine Watkins. After dinner, bring a glass out to the lawn, and roast marshmallows for s'mores from an adirondack chair circling one of the fire pits.

Before heading home, drive through the historic town of Leesburg. Download the free app to take a self-guided walking tour of neatly-preserved historic buildings, including the Thomas Balch Library, an Underground Railroad research site. Stop for a bacon, local egg, and cheese sandwich on homemade buttermilk biscuits at Cowbell Kitchen, or a host of baked-on-premises pastries.

At lunchtime, walk down the side alley to find the backyard dining at Shoe's Cup and Cork, a former shoe shop now selling fresh salads and burgers alongside local beer and wine. Don't leave town without a handmade macaron from Mocatina's, and a single-origin coffee from Goosecup, or one of the half dozen other stand-out coffee purveyors on King Street, Loudoun County's de facto coffee corridor. If you're there after 4pm, the unpretentious shop transforms into a cocktail bar, mixing up both classic and creative drinks. 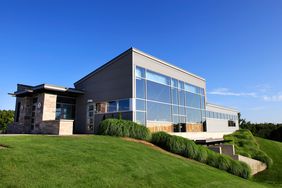