Chef Kwame Onwuachi explores the complicated and beautiful culinary history of Jamaica, with plenty of sprats and dumplings along the way.

In this life, some of my favorite food memories are of Jackie's West Indian Bakery, on 233rd street in the Bronx. From the oven emerged pillowy, soft coco bread and half-moon beef patties, filled with Scotch bonnet chile–studded ground beef. Jackie's was just one of many terrific Jamaican bakeries in the north Bronx, which, along with Flatbush in Brooklyn, form Little Jamaica, home to over 250,000 Jamaican immigrants in the New York City area. I used to live for those patties, that bread, moments of pleasure during the long commute from my house to school.

They reminded me of family. My father's mother is Jamaican, Grandma Gloria. My father is Nigerian. And those two threads of cuisine wove through the meals that simmered on my mother's stove. Jamaican food was on the table at my father's house and at the home of his brother, Uncle Rupert. Jamaican flavors ran all through my childhood.

Last fall, I visited Jamaica as an adult for the first time. I'd been once before, as a kid, to visit relatives. It was only just before this trip that I realized how complete my family's migration had been. They'd all left, some to England, others to the U.S. I arrived into Montego Bay, a secondhand third-generation Jamaican with no kith or kin to speak of.

I was here both to explore this country to which I owe such a huge culinary debt and to cook at a party: Rapper Common's mother, Dr. Mahalia Hines, was turning 75 the day before I turned 30. I got in late, with just enough time to grab some snapper at Sugar Mill before I passed out. The next morning, I met my friend Andre Fowles, the talented young chef at Miss Lily's at the Skylark resort in Negril, on the beach. He was standing with a broad smile on the deck of a boat, holding a spear gun. "Ready to go fishing, bro?" he said. "You have to ask?" I replied.

Into the blazing blue ocean we sailed until the captain cut the engine a couple miles offshore. Andre thrust a spear gun and a pair of goggles into my hand. We dived into the water. From above, the Caribbean Sea seems tranquil. Underneath the surface, life teems: Lobster, lionfish, and conch scatter and climb along the coral reefs. These are easy hunting, and I quickly bagged a couple good-sized lobster. Back at the beach, Andre had arranged for grills to be set up. We stuffed ourselves on fresh conch grilled with just a squeeze of lemon.

Get the Recipe: Kwame's Pepper Shrimp

Jamaica is written about in different ways in different places, and rarely by the same people. Front-page articles tend to focus on crime and corruption, both of which have plagued the country since its independence in 1962. Travel stories wax lyrical about the beaches (snow white), the ocean (deep blue), and the music (reggae, now on UNESCO's Intangible Cultural Heritage list). Taken together, these things are all true, but they tell a false story when told separately. Nowhere is this more clear than in Kingston, Jamaica's largest city.

After saying farewell to Andre, I drove three hours through the inland to Kingston to meet Jacqui Sinclair, a local food journalist, who happens, I soon found out, to know every single restaurant in Kingston, every vendor at every food market, and nearly everyone else, too. We started at Coronation Market, a vast farmers market in an old cast-iron pavilion on the eastern edge of Tivoli Gardens. Inside, I walked by mountains of fiery Scotch bonnet chiles, mounds of dark crimson hibiscus blossoms, and Technicolor displays of fresh ackee. We bought them all. "C'mon," said Jacqui. "We'll make this all at my house."

Shopping done, Jacqui took me to a stall for sprats and dumplings, vinegary fried escovitch fish accompanied by flecks of fried dough. "Don't fill up," she cautioned. "We have a ways to go." What followed wasn't just a food tour but a journey into Jamaica's colorful history. The curry goat at Moby Dick was a reminder of the Indian influence still exerted after British merchants brought Indian indentured laborers to Jamaica in the 19th century. The bowls of steaming peanut porridge, touched with honey and cinnamon, made clear the connection with West African cuisine, forged with the arrival of thousands of West African enslaved people brought here to work the sugar plantations. The stew peas—with its long-simmered salt beef and pig tails­—connect Jamaica to the rest of Latin America's rice-and-bean obsession.

Get the Recipe: Kwame's Escovitch Snapper

It was evening when we arrived back at Jacqui's house in the hills of uptown Kingston. She had invited friends over, including a fellow Culinary Institute of America–trained chef who goes by Alex D-Great and who had bright green dreadlocks. "Kwame, brother," he said to me. "Let me show you a thing or two." He led me to the kitchen, where he was mid–mise en place, making brown stew chicken. My nostrils flared as memories flowed into me. This was a dish from my childhood. Alex showed me how he first marinates the chicken with raw sugar, tomato and onions, garlic, scallions, allspice, Scotch bonnet, and pickled pepper sauce, a sort of Jamaican Worcestershire sauce. As we cooked together, marinating then searing the chicken, adding stock and a bit of ketchup, the smells bloomed around us, and when I lifted the spoon to taste the stew, I felt, at last, at home again.

I went back to the hotel, sated and tired. I had to gain strength for the birthday gig in a few days. The question wasn't what I would be making but what I wouldn't. I knew a brussels sprouts dish from my menu at Kith/Kin, sprats and dumplings, and escovitch fish would make the cut. But these market days had lit my imagination afire. When it finally came time to cook, vinegars and peppers and curries swam together in the kitchen. In the many rooms where the party took place (for Dr. Hines had many friends), worlds combined, too, as celebrities, educators, and family all gathered on this complicated and beautiful island for an evening of pure joy. 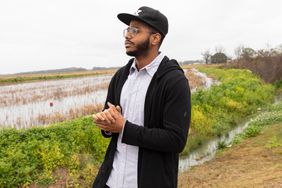