In this three-part video series, Chef Kwame Onwuachi traces his culinary roots by traveling to Trinidad, Jamaica, Louisiana, and Texas.

The rub of time is that when you meet your ancestors, they're already old. I know my grandfather not as a young man, clean-cut with a skinny tie, but as Papa Winston, a cloud of a white beard ringing his chin and laugh lines like rivers creasing his eyes. But I have to admit, when I met him in Miami a few months ago on our way to Trinidad, he had all the joy of a young man embarking on a new adventure. Read More.

Get the Recipe: Chickpea Doubles with Tamarind and Scotch Bonnet Pepper Sauce

Last fall, I visited Jamaica as an adult for the first time. I'd been once before, as a kid, to visit relatives. It was only just before this trip that I realized how complete my family's migration had been. They'd all left, some to England, others to the U.S. I arrived into Montego Bay, a secondhand third-generation Jamaican with no kith or kin to speak of.

I was here both to explore this country to which I owe such a huge culinary debt and to cook at a party: Rapper Common's mother, Dr. Mahalia Hines, was turning 75 the day before I turned 30. I got in late, with just enough time to grab some snapper at Sugar Mill before I passed out. Read More.

Get the Recipe: Kwame's Pepper Shrimp

In Her Footsteps: Louisiana and Texas

My earliest memory is not inscribed in my mind in words, but as flavors. I was a toddler, in the kitchen of my apartment in the Bronx. It was just after Christmas—the tree was still up—and my mom served my sister and me shrimp étouffée for dinner. Shrimp stock that had simmered in a well-worn soup pot on the stove infused the dish, along with crawfish tails and crawfish fat. I hadn't been to the sea, but I could taste the sea in it. I didn't know what the trinity was—the onion, celery, and pepper that form the base of so much Creole food—but I could taste the trinity in it. Those flavors—buttery, silky, rich, deep, multileveled—were set into me like scrawls on wet cement. Today, they still mean one thing to me: home. Read More.

Get the Recipe: Crab and Shrimp Etouffée
Was this page helpful?
Thanks for your feedback!
Tell us why!
Related Articles 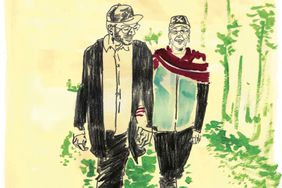