7 Upscale Insect Dishes from Around the World

In America, eating insects has mostly been relegated to a stunt game show (of the early aughts) and the occasional grasshopper taco on the menu of a more authentic Mexican restaurant. For centuries, though, bugs have been an integral part of diets around the world, providing a sustainable, economical source of protein in cultures from South America, Africa, Australia and beyond. While the thought of choking down a tarantula, its hairy legs squirming wildly in protest, might seem offensive to some (all), restaurants across the globe are elevating the insect to gourmet status. Read on for some intriguing dishes that are helping to squash the stigma of edible bugs.

René Redzepi of the world-renowned Danish restaurant Noma is no stranger to cooking (or in this case, not cooking) with insects. At his 2012 London pop-up, the legendary chef served creme fraiche dotted with live ants, and in Japan in 2015, Redzepi's shrimp sushi also came crawling with the tiny black insects. At his two-month turn in Tulum, Mexico, the fourteen course menu showcases the chef's signature innovative interpretations on regional cuisine. One such course is a tostada with grilled espolon beans and creamy escamoles (ant eggs), prepared with grilled habanero oil and garnished with beach greens and flower petals.

Fried insects are a common snack in Cambodia, for sale at stalls throughout the country's markets, but at the Bugs Cafe in Siem Reap they get a gourmet upgrade. The tapas menu features traditional Cambodian dishes like wild spring rolls stuffed with ants, green papaya salad with grilled marinated scorpions and kaffir lime, and tarantula doughnuts, dipped in tempura, deep fried, and served with sweet chili sauce and mango chutney. For those on the fence, perhaps a house cocktail will help spark some courage. The Spicy Cucumber with vodka, muddled cucumber, fresh ginger, mint, and chili would do the trick, but perhaps the black widow (with vodka, espresso, and Kahlua) would be more appropriate.

In Japan, bowls of hot, salty ramen might be topped with sliced pork, boiled eggs, dried seaweed, and in at least one Tokyo shop, bugs. According to Reuters, Ramen Nagi in Tokyo held a popular pop-up, serving insect tsukemen with crickets and mealworm-peppered noodles in a cricket, grasshopper, or silkworm powder-flavored broth. The full course meal sold out within four hours and included the bowl of ramen, fried worm spring rolls, cricket rice, and ice cream flavored with insect powder.

Situated on a traditional Pembrokeshire farm, this charming restaurant in Wales is doing its part to make insect-eating mainstream. While fresh, locally-sourced options abound for non-adventurous eaters, chef Andy Holcroft seamlessly blends bugs into both traditional British pub fare and international cuisine. Bug wellington with mixed bugs and chestnuts wrapped in cricket crepes and puff pastry, toasted cumin mealworm hummus, and Welsh cakes with cinnamon mealworms are all get rave reviews, but one favorite is the signature bug burger. Made with toasted crickets, mealworms and grasshoppers, spinach, sundried tomato and served with polenta fries and tzatziki sauce, think of it as an exotic version of a veggie burger.

Bugs aren't the only thing on the menu requiring an adventurous palate at Archipelago. The romantic candlelit restaurant in London's Fitzrovia neighborhood serves up python carpaccio, marinated kangaroo skewers, and crispy zebra jerky, among other global delicacies. Try a side dish of love bug salad, made with worms and locusts, and save room for insect-focused desserts like chocolate covered locusts and the Bushman's Cavi-Err — blinis topped with coconut cream, vodka jelly, and caramelized mealworms.

Though the name might suggest an all-bug menu, the popular East Village restaurant serves innovative spins on traditional Mexican fare, both with and without insects. To go all in on bugs, though, try a smoky jalapeno margarita rimmed with black ant salt, the Croquetas de Chapulin (yucca-manchego and grasshopper croquettes), and an order of the house guacamole. The recipe changes with delicious additions like diced mangoes, pomegranates, or fried chickpeas, but it's always topped with a sprinkling of tangy, nutty ant salt. When asked, you definitely want to add guac here. 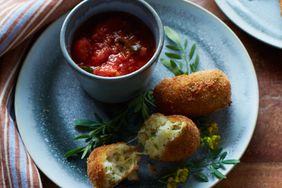 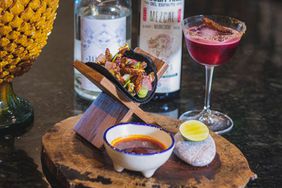