What's next for one of the hottest trends in food? More of the same, looks like.

When the city of New Orleans handed over the keys to a renovated St. Roch Market to a pair of local entrepreneurs, a few years back, plenty of people were skeptical—was an elegant new food hall the right fit for a tattered strip of St. Claude Avenue, directly on the edge of the less-than-elegant Seventh Ward?

A handsome bit of history brought back from near-decimation in the wake of Hurricane Katrina, St. Roch had long held a place in the hearts of old timers, some more than a touch overwhelmed by the upgraded market's stark, all-white interior, the bar with its pricey craft cocktails and raw towers, plus a dozen or so stalls serving up often unfamiliar food, in a part of town more bound by tradition than most.

The skepticism may have been justified, but it didn't stop the market from becoming a huge success. Suddenly, a part of town that was probably not on the hit list of the average visitor to New Orleans was now a thing. A major thing, to be precise. Now, the crew behind the project is preparing to launch a St. Roch Market in Miami's Design District, another neighborhood that knows plenty about turning nowhere into somewhere.

Scheduled to open early next year, the South Florida sequel will feature roughly the same number of vendors, plus a repeat of the original cocktail bar from New Orleans, because really, who knows better than New Orleans, when it comes to cocktails. And that's not all—while they're now working to find a new venue, a planned expansion into Nashville remains on track. Very soon, there'll be a second market from the team right in New Orleans, over in the city's more centrally-located Warehouse District.

St. Roch's success is just one example of the hunger for expansion, within the fast-growing food hall sphere—Pittsburgh's Smallman Galley, a small, incubator-focused hall opened in 2015 that rotates concepts out in favor of new ones after a period of time, has not only expanded to a second location in Pittsburgh, plans have now been announced for a Galley in Cleveland's happening Ohio City neighborhood. A debut is expected later next year. Then, of course, there's Italy's Eataly, which entered North America in 2010 with just one location in New York's Flatiron District; to date, it has four locations in the United States, with a fifth—Los Angeles—set to throw open its doors very shortly.

Speaking of Europe, the United Kingdom-based media company Time Out's smashing success in reviving Lisbon's renovated Mercado da Ribeira has taken plenty of people by surprise—two years after opening, the market had received more than three million visitors; it's now ranked as the number one tourist attraction in the city, with a lot of fairly steep competition.

Can the magic be repeated elsewhere? The company, still known primarily for its travel guides, is betting on yes—CEO Didier Souillat, a Harrods vet, is heading up what seems to be a relatively ambitious expansion, starting with the 17,500 square-foot Time Out Market Miami, debuting next year just off of the heavily-touristed corner of Lincoln Road and Washington Avenue, in the city of Miami Beach. The following year, expect the Time Out Market Boston, over near Fenway Park, with more to follow—previous announcements for London and New York and rumblings of a Time Out Market in Chicago's so-hot-right-now Fulton Market neighborhood haven't yielded any official opening dates, but don't count those cities out, not just yet. 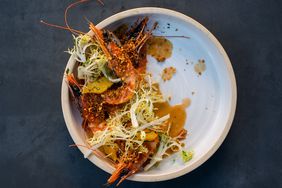