Goes to Wales Once, Gets Obsessed with Welsh Cakes

The pandemic inspired me to get weirdly invested in my Welsh heritage—and delve into Welsh Tiktok, raisins and all.

There is a young man named Ellis Lloyd Jones who has absolutely no idea how much joy his TikToks bring me, and especially how badly they make me crave Welsh cakes. Weirdly, for a person who grew up in the Northern Kentucky suburbs, I spent a lot of time around Welsh people, singing songs around our home's piano in an ersatz eisteddfod and selling wee Y Ddraig Goch flags at the Wales booth at the International Folk Festival alongside other members of the Welsh Society of Greater Cincinnati. So far as I understood, my family had some nominal connection back to Cymru via my great-great-great-grandfather John Davis who emigrated from there to Canada at some point, but I didn't sweat it; I dug the sweets.

OK, maybe "sweets" is pushing it a little bit here. Picau ar y maen—also known as Welsh cakes, Welsh miner cakes, pice bach, cacennau cri, and teisennau gradell—are thick-ish, round tea cakes traditionally made on a baking stone or griddle, studded with dried fruit, possibly sprinkled in caster sugar, served warm or cold, butter and jam optional. They're not a rich, damp fruit bomb like the also-traditional bara brith, or a Christmastime pwdin nadolig which I love with all my heart and made for the first time this year, but they possess a sturdy and singular appeal of their own. And just try taking a fancypants Paris-Brest or sfogliatella down in the earth's crags like my mining forebears and see how well that holds up in your lunch pail. A good Welsh cake or two will tide you over.

But then again, for most of my life, I wasn't quite sure what a "good" Welsh cake was. I greatly enjoyed the version my dad made from the recipe in the 1979 Celtic Cookbook collected by Helen Smith-Twiddy, an "experienced cookery teacher" who studied in Australia before settling back in Aberystwyth in her native Wales, but had no metric by which to measure. (Much in the same way that after 300 days of studying Welsh on Duolingo, I still have no idea if I'm slushing my doubled lls and rolling my rs properly, but I feel confident that I could write a note to an Abergavenny resident inquiring where in town I might purchase a kilo of leeks.) My honeymoon trip around Snowdonia was preoccupied with white-knuckled driving (or, rather, passengering) on single-track, sheep-blocked road and trying to buy blackcurrant brandy at the Tesco in Porthmadog to think to seek any out—an omission I didn't note until we'd crossed the border back into England and were speeding down the M1 back to London. Cachu hwch!

Not Only Does Welsh Whisky Exist, It's Seeking Protected Status

I put it out of my mind for the next 14 years or so, until ye olde pandemig Coronafeirws sent me back down my mind's mines and I hurled myself into all things Cymraeg in a mad attempt to will myself anywhere but the confines of my own apartment. I studied the language shoulder to wing with Duolingo's tylluan gwyrdd mascot Dewi Lingo, practicing a mashed-up Wenglish (that'd be the English-Welsh mashup spoken in many homes of the bilingual country), lurking on Zoom events hosted by the New York Welsh social group, watching videos of Matthew Rhys (OK, I just like looking at Matthew Rhys), and finally, finding my way to Welsh Tiktok.

It's a lovely thing, and it's nominally guarded at the border by the aforementioned Ellis Lloyd Jones who among other charming characters, likes to dress up as a human-sized daffodil (the national flower of Wales) and play the attendant at the national tollbooth of Welsh Tiktok. There, he inquires of border crossers their fluency in Welsh, if they've got a sheep in tow (again, only went there once for a week, and I saw more fluffy dafad than I have in all my decades in the US), and, most importantly, if they like raisins in their Welsh cakes.

Up until that point, I'd honestly no idea that it was even a question. Perhaps in my naivete I have always clocked currants as raisins, and remember somewhat of a fuss finding them at the local Kroger when my dad would make a batch back in the '80s, but somehow the mention opened up a gnawing in my soul, a red dragon slavering for the flavor of a country to which I have but a gossamer tie, but has burrowed deep into my being. There is, of course, a Welsh word—hierath—that means a longing for home, and maybe that's tangled somewhere in the twist of my DNA but also, I really just like Welsh cakes.

I was about to dig out my copy of the Celtic Cookbook and attempt a batch for St. David's Day (it was March 1, but the Welsh Congregation of New York City is celebrating with a service and singalong on March 14 so I'm giving myself grace) when a couple of packages arrived in the mail. One bore a desktop-sized Welsh flag, and the other, two packets of cakes from The Welsh Baker, a husband and wife duo in California who bill themselves as "America's Premiere Purveyors of hand griddled Welsh Cakes since 2009." There was nothing in either shipment indicating the sender, but I texted my dad straight away to say diolch yn fawr, because it could only be from him.

I have no idea when I'll get to see my dad again in person; he is hundreds of miles away in South Carolina and there's still a pandemic raging out there. But last night, as I gently opened the carton of currant-flecked Welsh cakes (with helpful text on the side explaining that "it's like a tiny raisin") and poured myself a small splash from that very bottle of Black Mountain brandy I'd been in search of so long ago, I allowed myself to dream a little. I imagined pulling up to a tollbooth on the edge of the River Dee, daffodil-headed Ellis Lloyd Jones popping out to inquire as to the whereabouts of our sheep, the purpose of our visit, and if we spoke any Welsh. "Deuthum â fy nhad i weld y golygfeydd braf a bwyta pice ar y maen," I'd say—surely more fluently in my head than out of my mouth in real life, but I'd like to think he wouldn't judge.

"Croeso," he'd reply, handing me a complimentary bag of cacennau cri, possibly while humming a Tom Jones tune. And if they happened to be stuffed chock full of raisins, that'd take the cake. 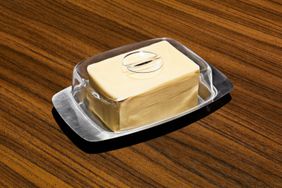