Emilia-Romagna is the birthplace of so many beloved Italian foods, from tortellini to Prosciutto di Parma. Plan a salumeria-hopping, wine-fueled itinerary through the stunning Italian region.

Any trip to Italy promises its share of memorable meals. But to go straight to the source, travelers should head to Emilia-Romagna, a region that has become synonymous with food. Boasting the country's highest number — an incredible 44 total — of PDO (Protected Designation of Origin) and PGI (Protected Geographical Indication) products, including Parmigiano Reggiano, Prosciutto di Parma, and traditional balsamic vinegar, Emilia-Romagna is also the birthplace of an outsized amount of globally beloved Italian dishes, such as tortellini, piadina, and bolognese. Without Emilia-Romagna's farmers, cheesemakers, butchers, winegrowers, and chefs, it would be difficult to imagine Italian cuisine as we know it.

With so much to taste, where should you start on a single trip? Though all of Emilia-Romagna is known as the national Food Valley, the cities of Parma, Reggio Emilia, Modena, and Bologna and their surrounding countryside lie at the heart of the region and produce many of its stars. From Lambrusco tastings to salumeria-hopping and everything in between, here are the best ways to sample Emilia-Romagna's culinary history and culture.

When it comes to Emilia-Romagna's protected products, Parmigiano Reggiano undoubtedly reigns as king. Don't miss the chance to visit Caseificio San Bernardino or another official dairy where you can watch true artisans make this beloved cheese in essentially the same way as monks did in the Middle Ages. While gathering and splitting the curds into unwieldy 90 lb. wheels is impressive, the maturation facility — unofficially described as "the cathedral of cheese" — is breathtaking.

Towers of Parmigiano Reggiano resting for at least a year await the blessing of PDO inspectors, their rinds stamped with identifying seals and marks. The luckiest cheese wheels go to even luckier people, aging to 45 months or older and becoming dry and crumbly with a perfect umami flavor.

Bologna is known as "the Fat One" for good reason. From tortellini and tortelloni, to tagliatelle and lasagna, handmade egg pasta is what it's all about here. (Even better when you toss the al dente strands with homemade ragù Bolognese, another local specialty.) At Le Sfogline, named for the women who pull the dough, get hands-on and discover the tricks of this ancient craft with brilliant pasta chef Renata Zappoli during her three-hour cooking class.

Forget everything you think you know about balsamic and pay a visit the family-run vinegar producer Acetaia di Giorgio, where Giorgio (a retired Italian national volleyball player) and his wife, Giovanna, will show — and let you taste — the difference between the generic stuff we toss on salad and their syrupy, complex aceto balsamico tradizionale di Modena. Once called "black gold," balsamic and the series of barrels, known as a batteria, used to age it are prized possessions that traditionally formed part of a bride's dowry. Care to splurge? Acetaia di Giorgio's finest vinegar is produced in batches of just 60 bottles and sells for €350.

Gaze upward when entering Parma's Duomo and you'll see a work of art on the façade that sums up the city's religious devotion to cured meat: a butcher killing a pig for the winter season. From the eponymous Coppa di Parma to Culatello di Zibello, a top-shelf salami made only from the thigh muscles, most meals here begin with a heaping plate of cold cuts.

One of the best ways to sample everything the region has to offer is by heading straight to a salumeria. Founded in the 1950s, Salumeria Garibaldi remains a local favorite with casual counter service and no-nonsense platters of meat, while Salumeria Bruno offers a hybrid between a delicatessen and trattoria, if you prefer to eat your ham with a silver fork.

Want to dig into the production of Emilia-Romagna's protected recipes and ingredients? The region hosts 25 —yes, 25 — food museums. Learn how to make the sweet stuff at the Gelato Museum in Bologna, housed in the same building as the professional Carpigiani Gelato University. Get an inside look at the craftsmanship behind salami, cooked ham, and other Emilian specialties at Modena's Museo della Salumeria, the first museum in Italy dedicated to charcuterie. And if that doesn't suit you, you still have plenty of subjects to choose from, including pasta and tomatoes.

Produced in the provinces of Modena, Reggio Emilia, and Parma, fizzy Lambrusco is the oldest documented wine made in Emilia-Romagna. A tour of the region's top vineyards will also reveal that it's far more complex (and delicious) than its undeserved reputation as "Italian Coca-Cola" would have you believe.

Spend an afternoon or two exploring the countryside's rolling hills and pop into Medici Ermete, where you can sample the dry, award-winning Concerto Lambrusco and lightly sparkling pink Phermento. At Monte delle Vigne, have a picnic in sprawling vineyards set on the hills of Ozzano Taro and enjoy the winery's juicy Lambrusco Spumante, which hints at summer's sweetest fruit without turning into a dessert itself.

Dine where innovation and tradition meet

In Emilia-Romagna, you could easily survive on salumi and cheese alone—but the region also hosts many of Italy's finest restaurants, including Massimo Bottura's three-Michelin-starred Osteria Francescana, which mischievously plays with time-worn recipes and Bottura's memories of childhood meals in Modena, a town known for its culinary tradition. (Mortadella foam sandwich, anyone?) If you can't score one of the twelve tables, book a seat at its little sister, Franceschetta58, where the kitchen has even more fun with mini "Emilia" burgers made of Chianina beef, cotechino, and mayonnaise with a balsamic vinegar glaze. 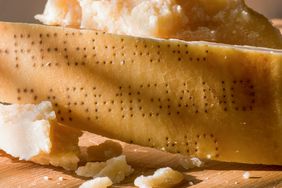 Buying Parmigiano Reggiano? Why Age Matters More Than You Might Think 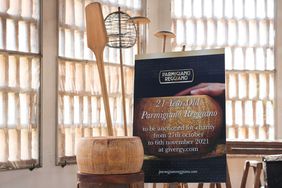 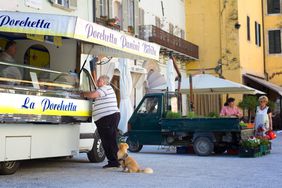 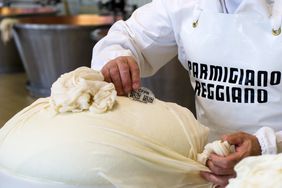