The historic pub is great for a pint, and a story or two.

No trip to Britain is complete without a pint or meal at a pub. Luckily, if you're purely going for the cultural experience and aren't fussed about quality, it's not a difficult thing to tick off the travel itinerary. Pubs are a dime a dozen in the U.K, regardless of whether you're in a major city, or a quaint village. But not all pubs are created equal, and some are worth making a special journey for. Edinburgh's oldest licensed public house dating back to 1360, the Sheep Heid Inn, is one of them.

During the pub's storied history, it's known to have hosted and served a few famous poets and personalities. Edinburgh-born novelist Robert Louis Stevenson is said to have popped-in for a pint and bite during his lifetime; renowned Scottish poet Robert Burns, whose works are religiously recited to celebrate the quintessential Scottish haggis and beloved Scotch whisky has also stopped by for a dram; and, most notably, in 2016, the late Queen Elizabeth II made a surprise visit for lunch — much to the shock of local regulars — after a day spent at a local racetrack. With such a rich history of noteworthy patrons, Sheep Heid Inn makes a strong case for a special trip. So, as soon as I touch down in Edinburgh, I make it my first stop for a pint of beer and glass of scotch.

Britain's Oldest Pub Won't Be Closing After All

The pub is located in a small village, near the royal residence of Holyrood Palace, called Duddingston. It's just far enough east from the hustle and bustle of Edinburgh's youthful college students and working professionals, but close enough where historic pub lovers can get there via a short cab or bus ride. I, however, make the trek by foot; it's the best way to see some sights along the way, and it's an even better way to build up my thirst for a frothy pint of Guinness — a well-deserved reward for the journey.

Centuries ago, during the medieval era, Duddingston was a hub for sheep butchers. The sheep, reared on nearby Holyrood Park, were brought to the village for slaughtering. The Sheep heads were one of the less popular items at the local meat markets, but cooks at the time made the most of each animal to maximize profits and eliminate waste. Appendages were often used in dishes such as singed sheep head and powsowdie (a broth or soup made from a Sheep head), and that's where the Sheep Heid Inn's name originates.

While I'm not one to shy away from eating offals and the like, I'm slightly relieved to learn that these historic dishes are no longer featured on the pub's menu. Instead, as I finally arrive at the pub after my hour-long scenic walk and am swiftly escorted to a table in one of the three indoor dining sections, my server recommends the fish and chips or "Our Dirty Burger." The latter, he says, is served with lashings of cheese — both American-style and a runny cheese sauce — crispy bacon, beef dripping sauce and fries. If I didn't have an existing dinner reservation, I'd happily indulge in this utter filth; but alas, it's just a pint and dram for me this time around.

As is the case in any pub, I walk up to the bar to order my pint of beer. The space, while not as old as one might envision due to multiple rebuilds and renovations over the years, is characterful with wood-paneled walls dotted with photographs of Scottish castles, churches, people, and landscapes; there is even some fitting taxidermy, sheeps' heads included. I poke around the other sections while the bartender lets my Guinness settle before topping off the pour, noting the eclectic collection of seats, from ones with long-backs with floral-upholstery to more subtle studded leather chairs. The tented outdoor seating seems lovely as well for small groups who want to enjoy some fresh air, but I'm here for the old pub vibes indoors. I get a few glaring stares from locals who are just finishing up their late lunches as I investigate the spaces, before retreating back to gather my pint and find my seat at the table in the back area.

It's a cozy and relatively quiet pub given its removed location; although I imagine for a Sunday roast or pub quiz on Wednesdays that it gets a bit more lively. A wood-burning stove features in the main bar area, which I imagine is quite romantic and atmospheric during Edinburgh's cold winters. Mid-pint, the same bartender-server asks if I've gone to see the "skittles alley" yet. Clearly having overlooked that detail on the pub's website, I inquire about what he's referring to.

He points to an open door which leads to a long hallway, and around the corner of that hallway is this skittles alley. "[Skittles is] kind of like bowling, except there are no machines to reset the pins after you knock them down," he explains. He goes on to tell me how the pub actually used to hire younger kids during the summers to sit at the end of the lane to reset the pins and roll the balls back — not a bad way to make a bit of cash as a youngin — and how some folks have actually gotten married in the space in recent times because of how accommodating it is for small parties. "I'm not really sure why they chose the space," he adds when I enquire about why people chose to get married there, "it is the oldest surviving bowling alley in Scotland, so there's that, but it's also super cheap as a venue, which could also be a part of it."

With half a Guiness in one hand and my Canon camera in the other, I make my way to check out the space. The two bowling lanes are, indeed, old. It was built in 1880, and the old framed photographs on the wall of families and friends playing skittles over the years corroborate the alley's age. I withhold from testing my skills at skittles in the essence of time, and see off my pint of beer to order a cab back to my hotel to make dinner on time.

While I wait an undetermined amount of time for my local taxi, I order a shot of Glenfiddich 12 Year scotch at the bar before I make my way back — a fitting, sentimental dram to cap a special experience at one of Scotland's most storied pubs. My libation of choice is, I believe, just as poet Robert Burns would have preferred it to be.

Despite it being a long walk from the hub of Edinburgh, The Sheep Heid Inn is undoubtedly worth the journey. The food looked the part, and if it was good enough for the royals, it's good enough for the average pub-goer; the Guinness was proper — a credible indication of the quality of other pints of beer on offer as well; and to walk in the footsteps of so many famous personalities is a novelty in and of itself. My only regret is not having time for a game of skittles. It's one of the few feats that make this historic pub as unique as it is, but much like the vibrant soul of the Sheep Heid Inn, it's not going anywhere anytime soon. 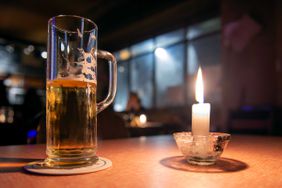