The long-awaited Disney Wish ship, which sets sail in 2022, will also debut a Frozen dinner theater show with a Nordic-inspired menu and a Cinderella-themed piano bar.

Cruise ship dining has come quite a long way over the past few decades. What was once a ritualistic experience where guests ordered off the same menu—at the same seating time, from the same waiter, at the same table, with the same people—has lost favor to what Norwegian Cruise Line first dubbed "freestyle cruising," with cruisers embracing a casual dress code and choosing between so many restaurants that it would be impossible to hit them all on a seven-night sailing.

Recently, Richard Branson's Virgin Voyages even scrapped the concept of both a buffet and a main dining room entirely with the debut of its first ship, Scarlet Lady, signaling the culmination of a shift in the industry. But what about the most unique player in the game, Disney Cruise Line? With the heavy weight behind the name, Disney has always been able to make their own rules (and set their own price points, which are generally higher than the competition.) As with their theme parks and films, though, the company's cruise ships strike a delicate balance between tradition and experimentation. Disney pioneered the concept of "rotational dining," for example, with passengers switching between three different themed dinner venues each night but still having the same waitstaff throughout the sailing like they would in a typical cruise dining room.

With the long-awaited new Disney Wish ship, set to make its first voyage in summer 2022, Disney is keeping this popular system but betting on guests' appetite for more story-driven dining experiences.

The stand-out newcomers on the food and beverage front will be Worlds of Marvel, a 700-seat interactive restaurant attraction featuring characters from the Marvel Cinematic Universe, Arendelle, a Frozen dinner theater show (both of these are part of the rotational dining offerings), and Star Wars: Hyperspace Lounge, a highly-themed bar that underscores Disney's dedication to their legion of adult fans, whether or not they have children.

"Our guests are often surprised by just how much fun and relaxation there is for adults on a Disney cruise," says Laura Cabo, Walt Disney Imagineering portfolio creative executive. "With the Disney Wish, we wanted to give our adult guests even more variety and options to customize their experience."

While other ships in the fleet boast themed restaurants around films like Tangled and The Princess and the Frog, these new experiences hope to stand out in their storytelling, or what Disney is calling "cinematic dining." Worlds of Marvel, for example, will put diners right in the center of the action during a three-act show in which Ant Man and The Wasp present an Avengers technology showcase that gets hijacked by Ultron. Each table will receive their own "Quantum Core," using Pym technology from the Ant Man franchise to shrink and grow objects in the room, including their own dinner (Spoiler alert: It all ends with tiny cupcakes.)

Arendelle will pick up where Frozen 2 left off, with diners acting as guests at Anna and Kristoff's wedding, featuring a Nordic-inspired menu and theatrical elements that seek to bring magic to each guest in the expansive space.

"We are going to create an ice effect that paints the entire ceiling of the restaurant," says Nick Snyder, Walt Disney Imagineering concept designer. Additionally, they are creating an Aurora Borealis lighting effect in the windows so that nighttime guests can see the Northern Lights when they look out into the sea.

Star Wars: Hyperspace Lounge is guaranteed to be the most sought-after spot for the over-21 crowd on the ship, though. Guests will enter through an air-locked sliding door replicated after the ones in the film franchise, then walk through a black hole that leads into the lounge. Behind the bar, passengers will stargaze through a 20-foot "window into space" that travels through seven different planets with specialty cocktails themed around each one.

Designed in close consultation with Lucasfilm's Oscar-winning production designer David Chiang, the bar promises to spare no detail — including liquors poured from clear thematic bottles so as not to take the guest out of the experience with the sight of a Jack Daniels label.

"We want to create a celebratory immersive space where hardcore fans can play as much as they want," says Snyder, while also acknowledging that they want make sure it's "not too serious or intimidating" for the more casual Star Wars watcher.

This is a balance that the Imagineers have sought to strike while creating all of these experiences on board. "We've had a lot of discussions about, 'how much story is the right amount of story?,'" says Sachi Handke, Walt Disney Imagineering project coordinator. "Guests are there to eat and we know that dinner is a time to connect. We wanted to make sure that the story is not taking over your dining experience to the extent that now you're not able to have a conversation."

Beyond Star Wars, Disney adults can revel in other, more subtly-themed spaces throughout the ship, including Nightingale's, a "refined piano bar" based on Cinderella, and The Bayou, a New Orleans-inspired lounge themed around The Princess and the Frog (and yes, there will be beignets.) Beauty and the Beast also takes center stage at three more no-kids-allowed spaces: The Rose, a chic cocktail lounge, Palo, a new twist on Disney Cruise Line's signature steakhouse, and Enchanté, the ship's fine dining establishment with a menu created by chef Arnaud Lallement of the three-Michelin-starred L'Assiette Champenoise in Tinqueux, France.

With the exception of 1923, a restaurant that will celebrate Walt Disney's "golden age of animation" (and serves as the third of the rotational dining locations), all of these new restaurants and lounges are themed around the company's growing catalog of intellectual property. This is a trend guests have seen in the theme parks—with rides themed around Ratatouille, Tron, and Guardians of the Galaxy all currently in the works at Walt Disney World—as well as the cruise ships.

"No matter what story resonates most deeply, whether its Marvel or Pixar or classic Disney animation, we want the guests to feel like, 'I'm home,'" says Handke.

The Disney Wish will sail for the first time with guests on June 9, 2022 from Port Canaveral, Florida. 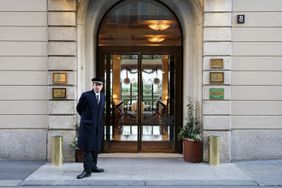