You can fuel up the car and buy all kinds of snacks at the general store, but everyone comes here for Casey's gas station pizza.

Your typical convenience store, let's face it, is pretty pedestrian stuff. It's there when you need it, offering the basics and little more. Every so often, however, you'll come across a part of the country where the locals seem to manage an almost renaissance passion for their own regional take on the genre, much to the bewilderment of outsiders. We're talking, after all, about a place to fill up on fuel, where you go to grab a gallon of milk — can a mini-mart really make your life that much better?

Apparently, yes. Philadelphia's relationship with Wawa is a perfect example of such hyperlocal enthusiasm. What began as a humble dairy store in the suburbs has managed to become one of the most beloved quick-service food operations in the country. Just how beloved? Wawa was recently ranked the best-loved sandwich chain in the country. Not bad, considering that even after an impressive growth spurt, most of the country has yet to set foot inside a Wawa.

Many Americans have, however, been to a lot of other convenience stores that offer similar quirks and perks. Lately, convenience stores around the country are starting to look more and more like food courts — chains like Sheetz, QT, GetGo, and Kwik Trip will often be found offering an impressive amount of food and some rather tempting snacks, while even 7-Eleven is experimenting with offering restaurant-quality meals.

Casey's General Store, headquartered near Des Moines, is not the flashiest of the bunch; with roughly 2,300 stores across 16 states and counting, you'll find the occasional newer, brighter location, and you'll find them all the way from Ohio on up to North Dakota (and, increasingly, down south, too).

The typical Casey's, however, will likely have been around for quite some time now; it will often be a focal point of the commercial and social life of a tiny town in Illinois or Iowa — chances are, it might be the only place to pick up cold drinks, hot coffee, or fresh donuts. In more cases than you might think, it also could very well be the only place in town for takeout meals.

Pizza in convenience stores is hardly unique, but for the most part, it will tend to be the stuff of last resort. There's something, however, about the pizza at Casey's that gets people talking. Some Midwesterners will tell you that Casey's makes the greatest pizza around; others can't believe that people are so excited by pizza from a gas station. Either way, so closely linked is Casey's to its pizza that you'll see many of its stores classified as Pizza Restaurants in certain popular map searches.

Not that Casey's appears to have any objections — with a handy smartphone app and a website both encouraging mobile ordering, they've made it extremely easy to grab a pie and go. On a string of recent visits to stores in Iowa and Nebraska, there was a limited-time offer going, two large pizzas for $11.49 each, which is a lot of pizza for $22.98. Great deals aside, you can typically expect to pay $10.99 for a small pie (six slices), $13.99 for a large pie (12 slices), and somewhere in the neighborhood of $2.50 for a slice, which, upon close (and repeated) examination, is not great value. Get a pie, instead.

How does the pizza taste, you may be wondering? Quite good, all things considered — you're starting with a relatively thin crust, in the Midwest tradition, allowing the pleasantly seasoned, not-overly-sugared tomato sauce to take front and center, along with healthy portions of standard-issue cheese and whatever toppings you are after. (Go for the sausage, it's pretty good.) The first time you try a slice, you may think to yourself, well, okay, one might be enough.

But then you'll find yourself on some windblown, remote stretch of I-80 with that Casey's sign and its unmistakable, red-shingled roof logo rising out of the fields, and you'll say to yourself, you know what? Another slice or two wouldn't hurt. After all, it's so easy — most stores seem to keep their rotating heating cabinet filled with fresh slices, particularly at meal times.

This is not necessarily pizza that's worth a journey for, but should you find yourself journeying through Casey's territory, chances are you'll be awfully glad for the company. 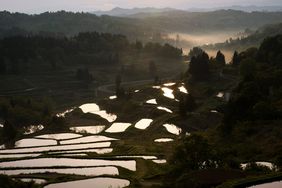