The Vineyards of the Canary Islands Are Covered in Volcanic Ash

And that's a good thing.

When Christopher Columbus sailed, supposedly for Asia, in 1492, he paused to restock in the Canary Islands, where the Spanish had just about finished wresting control from the native Guanche people (the islands were fully conquered four years later). He might have been tempted to linger in this beautiful archipelago at the edge of what was then the known world, but the islands’ location has always meant that most people move on. Captain James Cook stopped during his third and final voyage; Captain Horatio Nelson lost his arm here in battle, years before he fought the Battle of Trafalgar. The trade winds blew everyone in, and then they blew them out again. What did take root in this porous volcanic soil, along with a few hardy settlers, were grapevines.

Volcanic eruptions are terrible for vineyards, but only briefly. Once the lava cools, the volcanic soil left behind creates delicious wine that is lean, racy, and mineral: Santorini’s Assyrtiko, Nerello Mascalese from the slopes of Sicily’s Mount Etna, Northern Californian Cabernet Sauvignon. Vines planted by Spanish and Portuguese settlers made the Canaries famous: In Twelfth Night, Shakespeare’s Sir Toby Belch speaks of “a cup of canary.” Then their popularity waned, and for 200 years, the trade winds brought no trade.

“And a good thing, too,” says Jonatan García Lima of Suertes del Marqués on Tenerife, the Canaries’ largest island. No trade meant vines could grow and adapt in peace, and the result is a remarkable range of varieties that, if not precisely indigenous (Listán Blanco is also Palomino, the grape of sherry, while Listán Prieto is better known as Mission, the earliest European variety planted in the Americas), are so different from their other incarnations as to be almost unrecognizable.

The great eruption on the island of Lanzarote occurred in 1730, lasting nearly six years and transforming its terroir. The national park is a jumble of black rocks; although the volcano is now considered dormant, the ground is still warm. And not just the ground: We visited in January, the coolest month, on an island hop from Lanzarote to Tenerife, and still the sun shone. Inland, we shucked off light sweaters only to hurriedly pull them back on when the cool sea winds blew across the vineyards.

Those vineyards are starkly beautiful but surpassingly strange: covered in black volcanic ash, each vine planted in an individual depression, shielded from that chill wind by its own semi-circular wall of ink-dark rock. Driving through La Geria, the island’s principal wine region, is like crossing a giant muffin tray with vines where the muffins should be. “We can’t compete on quantity,” remarked Ana de León of Los Bermejos, one of the region’s best-known wineries, “but we can on quality.” She offered me a floral Malvasía Volcánica and an earthy, berryish Listán Negro that proved her point.

At Lanzarote’s oldest winery, El Grifo, founded in 1775, we toured the on-site museum (including a 100-liter 1930s wineskin made from a single goat), admired the sculptural cactus garden, and tasted a tropical, textured Malvasía de Lías as well as Canari, a glorious, sweet blend that’s their interpretation of Sir Toby’s suggested tipple. Hours later, we walked into La Bodega de Santiago, a terrific restaurant in tiny Yaiza, but the place was empty. The tomatoes, cheeses, roast goat, and papas arrugadas, the gorgeous local potatoes doused in mojo, a lightly spiced garlic sauce, were still being prepared. It was 7:30 p.m., but even 800 miles from the mainland, this was still Spain. We were invited to wait. We did.

In that 200-year-old house, we drank only Lanzarote wines. But fine-dining restaurants have a different notion of “local,” and at Isla de Lobos the next night, we were able to crisscross the archipelago without leaving our table overlooking the ocean. A light, floral white from Tagalguén, on La Palma, was followed by a gorgeously complex and aromatic wine called Agala Altitud 1318, from Gran Canaria’s Bodegas Bentayga. It went beautifully with delicately sauced prawns. And a Meursault-like white from Los Loros in Tenerife was so good that, three days and two ferries later, we were driving almost vertically up a sunny hill, looking for the winemaker. We didn’t find him because the winery was closed. (Lesson learned: Always call first.) But at Kabuki, a Michelin-starred restaurant on Tenerife’s southwest coast, we were happily reunited with his wines. “Locals don’t believe the wines here are good, but foreign guests are very interested,” Tara Hernández-Monzón, Kabuki’s sommelier, told us as she matched Japanese dishes to local wines. More fool them, I thought: Two fish-obsessed archipelagos meeting at the dinner table was a remarkable experience.

“It’s true,” said Roberto Santana of Envínate, a joint venture by four impassioned young winemakers in different parts of Spain. “People here don’t believe.” A note of sadness at this situation colored his voice. At Tenerife’s center, the Teide volcano rears up, its slopes nourishing Europe’s highest vineyards. The warm south of the island may have spectacular beaches, but drive north and the road rises, the air cools, the scenery grows lush—this is Tenerife’s great terroir. From Listán Prieto vines that are a century old, growing through a layer of sand from Teide’s last eruption in 1909, Santana makes Benje: a lightly balsamic red with a splash of sour cherry. Migan, a spicy Listán Negro he makes, is also lovely. In fact, all his wines seem to vibrate with a beguiling combination of ancient turmoil and modern excitement.

At Suertes del Marqués, vines roll down another impossibly steep hillside toward the north coast, some so old they were thicker than my wrist. “It’s hard making wine here,” Jonatan García Lima said. “Everything sprouts. We cut the grass 10 times a year!” But he doesn’t compromise, picking by hand, pressing by foot. “I’m not here to make money,” he added with a shrug. “I’m here because I love it.” That passion is evident: From the 7 Fuentes “village wine” to the array of elegant single-vineyard bottlings, his wines are stupendous.

In Las Aguas village, we paused for one last meal. There, on the roof of Mesón Casa Mi Madre, eating crisp, fried fish and the aforementioned local dish of papas arrugadas, watching the tumbling ocean, I wondered how many of those long-ago intrepid adventurers resumed their journey reluctantly. Sun-soaked beaches, great food and wine, unforgettable scenery, and volcanic eruptions: What more could the world’s farthest corners have possibly had to offer?

Even if you can’t get to the Canary Islands, the wines can be found in ambitious U.S. wine shops and are worth seeking out. —Ray Isle

Named for a flower that grows on Tenerife, Tajinaste is run by Agustín García Farrais, one of the island’s most talented winemakers. This wine is 100% Listán Negro, full of plum and earth notes.

A quartet of wildly talented winemakers founded Envínate, for which they make superb wines like this evocatively smoky, old-vine Listán Blanco—a white that speaks of the Canaries’ volcanic past. 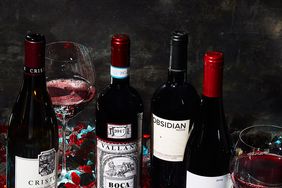 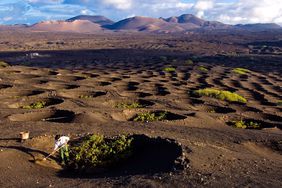 Volcanic Wine 101: What You Need to Know About This Booming Category