Whether they take a heavy cue from British tradition or hew more to modern American style, these top-notch pubs all have two things in common: exceptional meals and beers to match.—Courtney Balestier

Stephen Starr's cozy drinking den sports English-style furnishings and a menu of refined country pub classics (think rabbit rillettes and a traditional Sunday roast). There's a thoughtful menu of cask and draft ales, including British favorites like Bombardier, which are served in half pints and imperial pints. thedandelionpub.com

Located in a former carriage house, this is a West Village institution that launched a thousand gastropubs. Chef April Bloomfield's menu draws crowds with its Michelin-starred fare: devils on horseback, smoked haddock chowder, ricotta gnudi, and the legendary chargrilled burger with Roquefort and shoestring fries. The bar offers a worldly assortment of drafts, bottles and cans, including an eponymous house cask bitter courtesy of Brooklyn Brewery. thespottedpig.com

The sprawling space and communal walnut tables might say "beer hall," but this rustic destination is as welcoming as any corner pub. The international beer list features about 100 brews, sourced from Illinois to Iceland. There are a dozen rotating taps, including Hundred Horse Ale, a Publican collaboration with the Philadelphia restaurant Alla Spina and the Victory Brewing Co. Chef Brian Huston's refined, meat-centric fare—such as spicy pork rinds, and country ribs with shishito peppers and cantaloupe—is another attraction. thepublicanrestaurant.com

With a weekly-changing seasonal menu, this neighborhood hangout might offer anything from Baja-style fish tacos to smoked bluefish and bacon pâté with pickled mustard seeds. The taps hew local, often featuring regional favorites like Jack's Abby and Long Trail. Or try a cocktail mixed with house-infused liquors, such as tarragon tequila. thegallowsboston.com

This low-ceilinged, subterranean East Village favorite, which dates to the 1880s, offers a dozen always-rotating taps, often stocked with New York breweries like Barrier and Peekskill. (Owner Jimmy Carbone has been known to take customers into the bottle room for off-list picks.) The food menu features a seasonally inspired mix of plates like kale anchovy toasts, shrimp and grits, and sausages from a nearby Eastern European butcher; Jimmy's also puts together the occasional beer or cider pairing dinner. jimmysno43.com

Candlelit and homey, this Moreland gastropub extends its thoughtful, seasonal menu—featuring items such as in-house charcuterie or house-cut tagliatelle with smoked Idaho ruby trout—into late-night service, when it offers bites like creamy butter beans with fennel and gremolata. At the bar, 20 taps deliver a mostly local lineup of Pacific Northwestern brewers including Firestone Walker and Portland's own Base Camp. relishgastropub.com

In this relaxed pub, 2012 Food & Wine Best New Chef Jenn Louis and her husband, co-owner and bar manager David Welch, created the sort of place they'd visit on their day off. That means pub meals with fine-dining ingredients—say, pizza topped with hen egg, chanterelles, sage and Parmesan—and a playful but professional bar. In addition to the slushie margarita, Welch has an array of bottles like Oakshire Brewing's Overcast Espresso Stout and eight craft brews such as Fort George on tap. Best of all: the vintage arcade games. sunshinepdx.com

With a menu that veers toward quirkier pub recipes (wild boar sloppy joes with fried onion and sage) to seasonal modern American (Hudson Valley foie gras with Italian plums), this Capitol Hill destination has floor-to-ceiling windows and a prime view of the neighborhood. It also has an extensive list of domestic and international brews, from the house ale (by local Odin Brewing Co.) to a healthy selection of Trappist bottlings. quinnspubseattle.com

James Beard award–winner Linton Hopkins wanted his pub menu to represent Atlanta, and be friendly to a late-night crowd: done and done. The convivial, rock 'n' roll–scored space is famous for its short-supply burgers, just 24 of them served nightly at 10. But those who miss out have plenty to console themselves with: wild Oconee River catfish with grits, geechee gravy and bacon; or mondongo, a Puerto Rican tripe stew based on the sous-chef's grandmother's recipe. The beer list includes highlights such as Saison Dupont Farmhouse Ale and North Coast's Old Rasputin Imperial Stout. holeman-finch.com

There are worse ways to wait out a Minnesota winter than by settling in near the fireplace at this dim and cozy pub. An offshoot of the Twin Cities' popular Muddy Pig, this chef-driven destination turns out hearty European fare like Polish-style pierogi with oyster mushrooms, and roast chicken bubble and squeak. The 36-tap bar is well-stocked with local brews including Steel Toe Dissent and Indeed Fresh Hop. pignfiddle.com

One part pub, one part brewery, Magnolia creates beers that are often influenced by owner and brewmaster Dave McLean's favorite English-style bitters, milds and pale ales. Blue Bell Bitter, for instance, is made with heirloom Maris Otter barley from the UK's Branthill Farm. In addition to the house brews, the 12 taps feature guest selections such as Midnight Society Stout (from Cellarmaker Brewing) and Reality Czeck pilsner (from Moonlight Brewing Company). On the menu: Scotch quail eggs with beer-mustard aioli, and shepherd's pie with mushroom bisque. magnoliapub.com

The only thing more impressive than the bar at Stoddard's—which stands 15 feet high and 30 feet long and was imported from the UK—is the beer list. With tap, cask and large-format selections, the ever-changing roster of brews might include Jack D'Or, from the Cambridge-based Pretty Things Beer and Ale Project, and Avery Brewing's limited edition Uncle Jacob's Stout. From the kitchen, expect twists on hearty pub fare, like confit pork belly and ballotine of Vermont rabbit. stoddardsfoodandale.com

A modern take on Chicago's old neighborhood inns, this corner pub offers dinner, drinks and a place to crash, with six rooms for overnight stays. The 12 taps feature offerings from the local brewer Half Acre and Germany's Weihenstephaner Hefe Weissbier. A never-ending whiskey selection (148 options at last count) becomes more accessible through the Whiskey for Drinking program, a rotating crop of $3 pours—as many as 50 are on special at a time. The marrow bones and the burgers are crowd favorites, but executive chef and partner Jared Wentworth is equally adept with seafood and vegetarian fare. longmanandeagle.com

Given the talent behind it—the Hay Merchant is run by Chris Shepherd of Underbelly—it's no wonder this wood-and-metal pub succeeds so wildly. Just take a glance at the menu: sweet and spicy pig ears, wings doused in sauces like gochujang or caramelized fish sauce (a nod to Houston's Korean and Vietnamese influences), and an in-house butchery turning out Akaushi beef for the Cease and Desist Burger. The beer program is just as serious, with 80 taps (75 drafts, 5 casks) of American craft brewers and international selections. There's an emphasis on Texan brewers, including (512) and Lone Pint, and a fleet of firkins ready to nab breweries' limited-release offerings. haymerchant.com

Award-winning craft beer and expertly made barbecue combine in an atmosphere blending rock music, reclaimed barn–wood walls and a little barbecue smoke. The six taps feature house brews such as Gourd to Death (a pumpkin-spiced golden ale) and Sudworth Bock (a World Beer Championship gold medalist). On the menu, there's familiar fare with a twist: cracklin' chicken (cooked on a beer can) and the Bar-Be-Cue-Ban sandwich (pulled pork on a griddled roll with Swiss cheese, fresh bacon, fried jalapeño chips and mustard aioli). bluetractor.net

The amber glow in this dark wood-and-leather den is your cue to settle in for upgraded pub fare, including burgers amped up with Cambozola cheese and tomato jam, classic fish-and-chips with Lake Erie perch, and house-made sausages. The eight taps change periodically and include the Pearl Oyster Stout, made exclusively for The Pearl by local North High Brewing. There are also upwards of 40 bottles and cans. Can't choose? There's always the brown bag mystery can special—that'd be the first can the bartender grabs—all wrapped up, of course. thepearlcolumbus.com

With an aesthetic that straddles comfy pub and buzzy brasserie, this unpretentious neighborhood joint pays serious attention to its beer menu, featuring a changing mix of drafts like Southern Tier Warlock and the Pittsburgh Craft Beer Week collaboration Pennsyl-Tucky Uncommon. There's an array of cans, too, from 21st Amendment Back in Black to Tecate. (Add a koozie for $5.) Executive chef and owner Richard Deshantz serves thoughtful but casual fare: soft-shell crab tacos with corn Tabasco remoulade; and bone marrow with grilled bread, gremolata, onion relish and sea salt. meatandpotatoespgh.com

This whimsical, rustic space keeps Williamsburg in upscale pub dishes, including a half chicken with mustard greens and pomegranate; flatbread with potato, Widmer's brick cheese and shallots; and house-made pasta. At the bar, favorites from locals such as Brooklyn Brewery and Sixpoint stay on tap year-round alongside new finds and seasonal selections from the likes of Greenport Harbor and Bronx Brewery. There's a wide assortment of cans and bottles as well, from the easy-drinking Narragansett to the intense Gouden Carolus Cuvée. allswellnyc.com

With customers aged from 7 to 75, this spacious tavern lives up to its inspiration—the classic Wisconsin supper club—while serving a whole lot of state pride. The tavern features as many state beers as possible on its 50 taps, including Red Eye and Central Waters, along with 16 Wisconsin spirits, such as Death's Door gin and vodka. Local tastes rule the menu too, including the Wisconsin's Best Wurst platter and nightly specials that recall local traditions such as a Friday night fish fry and Saturday night prime rib feast. theoldfashioned.com 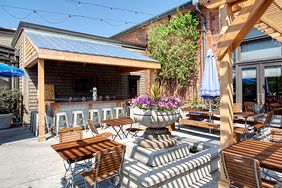 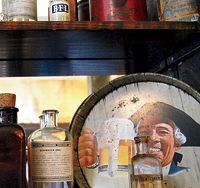