The secret to perfect biscuits is hotly contested: Lard or butter? Milk or buttermilk? Baking powder or soda? (Or both?) Every Southern home cook has an opinion, but these days, chefs from all over the country are joining in the conversation, digging through old church cookbooks and grandma's recipe box to find the perfect version. Served simply with butter and jam, or as vehicles for fried chicken, sausage or sawmill gravy, these flaky little numbers are all delicious. — Anna Watson Carl

The James Beard Award–winning chef Robert Stehling's extra-tender high-rise biscuit is known as the best in town (and no wonder—he makes it using a mixture of butter, shortening and lard). Have it with an egg, covered in sausage gravy, or order the Big Nasty: a fried chicken breast between biscuit halves, with cheddar cheese and gravy.

Biscuits in Soho? Yes. At Andrew Carmellini's pan-American restaurant, a sublimely tasty version—tall, fluffy and slightly crisp on the outside—straddles the line between a dessert and a side thanks to its dousing of honey butter sauce. Order them on their own or with the hot fried chicken at brunch.

No trip to Nashville would be complete without a stop at Loveless Café for the famously feather-light buttermilk biscuits, house-smoked country ham and red-eye gravy. Served warm with homemade jams, the star attraction has been made using the same secret recipe since 1951 (reportedly involving Martha White flour and Purity buttermilk). Lines are a given on weekend, but running out is not an issue: They make between 4,000 and 7,000 biscuits a day.

What started out in 2006 as a humble biscuit stand opened by three friends from North Carolina at the PSU farmers' market has grown into a full-on breakfast institution with a brick-and-mortar location. Lines form on the weekends for the gigantic buttermilk biscuit sandwiches, most notably the Reggie Deluxe: fried chicken, bacon and cheese, doused with gravy (sausage or mushroom) and topped with a fried egg.

Pastry chef Lisa Donovan says the secret to her tall, perfectly flaky biscuits (served regularly at her pop-up Buttermilk Road Sunday Suppers) is a combination of Cruze buttermilk, a hot cast-iron skillet, and a recipe inspired by biscuit queen Edna Lewis. At the newly opened Husk, she frequently makes her biscuits with minced parsley, to serve alongside Sean Brock's fire-roasted bone marrow appetizer.

Chef John Currence makes his fluffy buttermilk biscuits with a mixture of extra-cold butter and shortening and just a touch of sugar. His must-try dish is the Cathead, a biscuit sandwich piled with a choice of house-smoked sausage, bacon, country ham or fried chicken, and topped with a slice of cheddar. The name comes from a Southern term for biscuits baked as big as a cat's head.

Sarah Sanneh, one of the three owners of this cult Williamsburg café, makes her buttermilk biscuits with pastry flour and lots of butter, then glazes them with cream and egg before baking. Every order of fried chicken comes with one of these beauties, and the biscuit sandwiches are over the top. The chicken biscuit—a breaded and fried chicken breast assaulted by hot sauce and smothered in honey butter—is the perfect sweet-savory-spicy combo.

This 30-year-old diner is a Boulder mainstay (popular with both tourists and hippies) and is known for its tender buttermilk biscuits, made in regular and gluten-free versions. Regulars swear by the A.M. sandwich: a warm biscuit filled with a scrambled egg, melted cheddar, and a choice of ham, avocado or vegetarian sausage.

Top Chef alumna Tiffani Faison makes fantastic barbecue at her Southern-style restaurant, but her gigantic, flaky biscuits—served with honey butter—are the real showstoppers. The demand for these biscuits has been so huge that she recently added a second, biscuits-only oven to keep up with the lunch rush and deliveries.

Hilary Passman Cherniss left a law career to open her tiny Outer Sunset bakery in 2011. Located just four blocks from the beach (and named for one of the rocky Farallon Islands you can see in the distance), the bakery serves all manner of baked goods, but the breakfast sandwich is exceptional. The warm, flaky buttermilk biscuit topped with two scrambled eggs, cheddar cheese and applewood-smoked bacon is the perfect post-surfing treat.

Local star chef Tom Douglas's fluffy, square buttermilk biscuits are ideal for sandwiches. The Zach—with fried chicken, Tabasco black pepper gravy, bacon and an egg—is one of the most popular biscuit combos, though the warm biscuits are delicious on their own or with the incredible bacon butter.

Music-loving entrepreneur Jon Lach began selling his vegan biscuits (made with homemade vegan buttermilk) and gravies from a retro food truck in Hyde Park in 2011. The concept was an instant success. Today, Lach serves vegan originals and non-vegan versions of breakfast dishes like the Johnny Hash (biscuits with gravy, cheese, sausage, bacon, potatoes and chives) and the Gloria Gaynor (biscuits topped with three eggs, two cheeses, bacon, sausage, jalapeños and chives, and smothered in gravy).

David LeFevre's crispy bacon cheddar biscuits have quite a following. Oozing with cheddar and spiked with crispy bits of pork, these savory delicacies are on the menu morning and night, served with a side of house-made maple butter. They're also delicious in an ultimate Benedict, topped with poached eggs, arugula, prosciutto and hollandaise.

Located in the foothills of the Smoky Mountains, guests at Sam Beall's luxurious inn awake to freshly baked biscuits (made from White Lily flour, cold shortening and Cruze buttermilk) served with sweet sorghum butter, and farm preserves, or if you prefer, creamy sausage gravy.

Family-owned and -operated since 1967, this cozy diner hasn't changed much in the past 46 years. The warm, fluffy homemade buttermilk biscuits (two for $2) are considered some of the best in town–order them with skillet-cooked country ham, red-eye gravy and a side of grits for a true Southern breakfast.

This Chapel Hill mainstay has been serving golden, flaky biscuits (using owner David Allen's grandmother's recipe) from a drive-through window since 1978. By the time the window opens at 6 a.m., there's usually a line of cars waiting. You can order your biscuit with bacon and egg, sausage, steak or even a pork chop, though the most popular is fried chicken with cheddar. 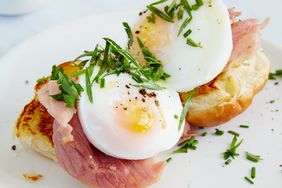