It's disputed whether Lafitte's Blacksmith Shop is the oldest bar in the U.S., or the oldest structure used as bar in our country. Regardless, the shop was built in 1722.

Lore surrounds New Orleans, and Lafitte's Blacksmith Shop—a hole-in-the-wall bar on the infamous Bourbon Street—is no exception to this rule. History paints a hairy picture of the structure: once owned by pirate Jean Lafitte, the house functioned as a blacksmith's shop by day and a smuggling operation for stolen, illicit goods by night.

When the pirate was arrested and his business seized, that house—a squat property with a slate roof, brick walls, and windows protected by gray storm shutters—was converted into a bar. That bar, New Orleaners say as fact, is the oldest bar in the U.S.. (It's disputed whether Lafitte's Blacksmith Shop is the oldest bar in the U.S., or the oldest structure used as bar in our country. Regardless, the shop was built in 1722.)

It's that fact that brought my friends and me to the corner of Bourbon and St. Phillip streets on a recent cold winter evening. As a one-time Southern resident, I'd stepped inside the two-story brique-entre-poteau—brick-between-post—building windows, which rise from floor-to-ceiling, more often than I'd entered through the bar's front door; but tonight its windows were closed, and a fire, lit inside its freestanding stone fireplace, warmed a gaggle of patrons gathered around the red and brown brick bar.

"Can you tell how old it is?" I asked my friends in the shop, lit by only votive candles, as they squinted in the darkness. One pointed out the ceiling over the bar seemed to be sinking—it was—while another dashed for drinks despite that harrowing idea.

While many tourists go straight for the "voodoo" grape daiquiri, a powerful mixture of bourbon, vodka, grape juice, and crushed ice, or the obituary cocktail, a combo of gin, dry vermouth, and a splash of Pernod bitters, we opted for cold beer, bad wine, and a vodka tonic, served in small, clear plastic cups—all the better to take to-go.

(Note: New Orleans does not have a strict open container law. Pedestrians can drink on sidewalks and in streets from plastic cups. Vehicle drivers may not do the same.)

In the back room, a singer crooned at a baby grand piano. We scored a scratched-up table-for-four near enough to the music so that we hear him—and the many patrons who had circled around him—sing the classics "My Girl," by the Temptations, "Let's Stay Together," by Al Green, and "Sweet Home Alabama," by Lynyrd Skynyrd, but not so close that we were bombarded by the long lines to the single-stall bathrooms.

As we learned the next night on a ghost tour that took a pit stop in front of Lafitte's, bartenders and patrons have often, allegedly, spotted the ghost of Jean Lafitte sitting at a table near the piano bar, tipping back a drinking and caroling with other guests. (Another ghost, a woman, has been spotted darkening the second-story windows.)

But during our visit, the only ghosts we spotted were—unfortunately—the ghosts of bad bathroom experiences. The women's single-stall bathroom featured a huge hole in the wall, while we were told the men's bathroom was basically a hole in the floor.

Despite that, my friends agreed, time spent at Lafitte's was a charming experience. The only complaint—beyond its bathrooms, of course—was that the history of the building was hidden in the dark. To which I say: back in the day, Lafitte's Blacksmith Shop was only a daytime cover; it became what it really was in the dark of night.

The same is true of today's bar: it's pleasant at noon, but Lafitte's is most alive, with people and with piano music and perhaps even with ghosts, in the evening. (Plus, you'll be glad you didn't have a better view of the bathrooms—just trust me on this.) 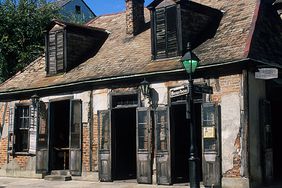 What to Drink at 10 of the Country’s Oldest Bars