A stunning new Mexican hotel makes a perfect base for exploring every incarnation of the fish taco along the coast.

Chef Eduardo Ríos and I will end up agreeing on many things, but our first agreement is a profound one: Tacos are our favorite food.

We're shooting the breeze after breakfast service at Ríos' restaurant at the heart of Paradero Todos Santos, a new hotel built on the edge of a farming community amid the arid geological tumble of Baja California Sur. It's vacation enough for me to absorb the silent desert dotted with cacti, the glittering Pacific in the distance, the vault of blue sky above, and yet I'm even more captivated by the view from my stool. From the polished concrete bar that surrounds the restaurant's open kitchen, I can see Ríos and his small team stoking wood-fired ovens, stoves, and hibachi grills in amicable silence, sending out plates that reflect the artistry Ríos has acquired from time working in his hometown of Mexico City at Enrique Olvera's Pujol and from traveling in Hong Kong.

Under Ríos, classic Mexican dishes like burritos, tostadas, and, yes, tacos, emerge with subtle touches from China, Japan, and Southeast Asia. Consider shrimp tacos, marinated in soy and chile, cooked in the zarandeado style (grilled over an open flame), and served with togarashi and chile mayo. You're getting the idea, and so are Baja culinary habitués journeying from Cabo an hour south, from the artsy village of Todos Santos to the north, and even from surf-forward beach resorts in the area. Every evening, they join hotel guests like me at the bar, where the mezcal list amplifies the siren song.

Now, though, it's late morning, and Ríos is doing what any chef does between services—he's tinkering. He mixes fresh clay to dab at hairline cracks in his Oaxacan comal. I'm loath to interrupt the work, but he asks me first.

I try to think of something sophisticated to level at the Pujol guy, but he saves me the pretense. "Mine is tacos," he offers. "Oh my god, me too," I say with relief. Because of course it's tacos. 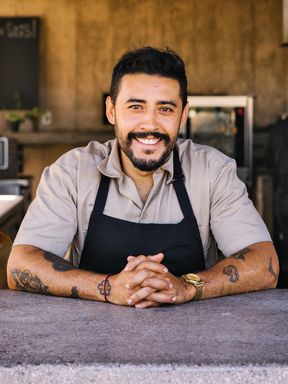 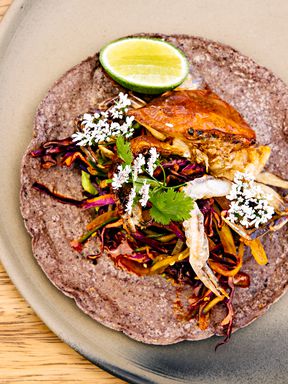 Having grown up on the Southern California coast, I've been eating tacos my entire life—especially the fish taco, that Baja specialty that migrated north with Mexican families running restaurants and stands from San Diego to Santa Barbara.

Is there any simpler masterpiece: a cut of fresh fish, battered and fried fast and hot, nestled into the embrace of a warm corn tortilla, with a mound of slaw, a pop of salsa, a counterpoint of sauces? A fish taco is a little sweet, a little salty, a little crunchy, a little creamy, and always messy.

And while there's some argument as to the fish taco's exact origin story, there's agreement that it began on this peninsula, which reaches south from California's southern border to terminate 800 miles later at the dramatic capes of Cabo San Lucas. Whether you subscribe to the version that places the first fish taco in Ensenada on the Pacific or San Felipe on the Sea of Cortez, it's generally agreed that Japanese fishermen in the region introduced tempura-style preparation to the Mexican form. The idea caught on, and by the 1950s, the gospel of the Baja-style fish taco was spreading to workers and tourists alike.

That means any trip to Baja California is potentially a fish taco pilgrimage, and while I could be very happy with any new iteration of taco that Ríos could dream up (another day, it features soft-shell crab), I'm also instantly lured by Paradero's taco tour, one of the hotel's many offerings. When I mention it to Ríos, he says he's already planning on going.

We begin at a landmark: Barracuda Cantina in the nearby surf enclave of Cerritos Beach. Bordered by blocks of condos, Barracuda hums under its thatch roofing. Bienvenidos—welcome—is painted on a faded blue surfboard. At one end of the Cantina is owner Danny Sanchez's taco truck; at the other, his tiki-esque cocktail bar, where fresh oranges, ready for juicing, are piled in zinc buckets. Between is an open-air emporium of good vibes, dogs snoozing on the sand beneath blue-and-white-tiled tables. The taco truck sends forth lots of tacos—fish and shrimp grilled or battered and fried—along with ceviches, smoked fish quesadillas, and aguachiles. Sanchez strolls around with his infant daughter on his hip through the blend of Mexican locals, sun-bleached expats, and slack-jawed first-timers.

After a round of tacos and margaritas, we head up Federal Highway 19 to Todos Santos. We stop at a new joint on the edge of the town's historic district along a dirt street, tiny Tiki Santos Bar, an open-air bamboo hut with a full bar and ceviche tostadas topped with fans of lightly oiled and spiced fresh avocado. After a round of iced Pacificos, we decamp into the buzzy heart of town for a stop at another landmark, Santo Chilote. Here, stucco painted green and hung with small portraits surrounds the shaded patio, along with painted, mural-style portraits of Saint Chile himself, a green pepper with a halo. The tacos are celestial, especially the coconut shrimp ones the place is known for, the shrimp set unadorned on its tortilla and brought to the table. The rest is up to the diner to build from a buffet cart of sauces, salsas, and chopped vegetables. At this rate, I realize, I can come to Santo Chilote every night and create a new taco.

That notion dovetails exquisitely with this beautiful corner of a beautiful country. Whether I'm parked at the Paradero bar, hoping to be adopted into the kitchen family at Barracuda, or returning over and over to the taco joints of Todos Santos, Baja is a wellspring of my favorite food.

What did Ríos also say to me over the comal? That's right: "Tacos are life." I could not agree more.

The Jesuits knew a miracle (water in the desert) when they saw one. No wonder they stayed, founded a mission in 1723, and named the place Todos Santos, or All Saints. The geology behind the miracle: The high peaks of the Sierra de la Laguna mountains catch the rare but torrential annual rainfall and capture the runoff in a vast aquifer under the valley sand. That aquifer once supplied sugarcane fields here and now supports small family farms growing organic produce, around them the empty desert and the broad, Pacific-pounded beaches. It's a paradise that has lured expats—especially artists—to revive a historic district of colonial haciendas and sugar warehouses with galleries, boutiques, and an increasingly savvy restaurant scene. The early 2021 opening of Paradero on the outskirts of town, planted as it is at the margin between farm and desert, with its modernist aesthetic and the high-voltage work in its kitchen, heralds a new and very cool era for a long-beloved hideaway.

Most major airlines offer direct service to San José del Cabo Airport. From there, it's a one-hour drive to Paradero, which will arrange private transfers in a luxury SUV. 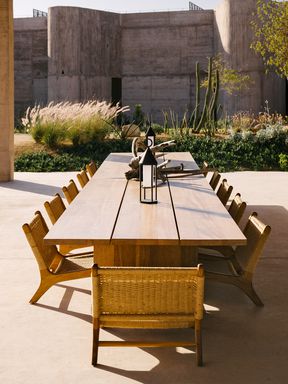 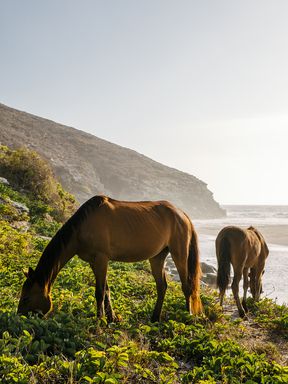 Paradero Todos Santos has 35 sanctuary-like suites crafted entirely of concrete. But whether in the garden suites (some come with fringed hammocks, others with soaking tubs) or the sky suites (with sweeping triangular nets suspended for stargazing), every room is softened by thick floor cushions and nubby textiles. Screenless windows open to sweeping views of desert or farmland, while the swimming pool offers an infinity desert vista. Within the walls, a serene, low-water botanical garden and an oasis-like stream offer shade, places to congregate, and hideaways for the hotel's spa program. And of course, there's the house restaurant in the open-air heart of Paradero, a destination within the destination that's not to be missed. Rooms from $550, including breakfast and a daily experience such as hiking, biking, farming, cultural tours, and the taco tour, paraderohotels.com