Raphael Kadushin is an award-winning food and travel writer based in Wisconsin. In addition to Food & Wine, his work has appeared in Bon Appétit, National Geographic Traveler, Condé Nast Traveler, MSN, BBC, and others. His fiction and journalism have also been anthologized in three editions of Best Food Writing and National Geographic’s Behind the Lens.

I was 4 years old when I truly tasted food for the first time. My family had moved from the American Midwest to the northern Dutch college town of Groningen, where my father had accepted a professorship, and every new flavor I encountered was a revelation. My palate was awakened with a jolt by ropes of licorice, black as tar, that were somehow both salty and sweet; by thick, creamy Frisian milk; by chunks of soft, nutty Gouda cheese; and by the gingery heat of speculoos cookies. The only thing I avoided before we returned home years later was the street vendor's daily haul of silvery little sea monsters—rows of herring posing against banks of ice.

But when I returned to the Netherlands as an adult in the aughts at the start of my annual pilgrimages to Amsterdam, I was disappointed. While the herring stands parked all over town stayed true to fishy tradition, the city's most vaunted restaurants lacked the distinctive Dutch flavor I still remembered from Friesland. The serious dining scene was largely limited to stuffy and somber French restaurants, where the duck à l'orange was on point but any distinctly Dutch taste was missing. Holland's bulging larder—North Sea fish, Frisian dairy, Texel lamb, the roll call of cheeses—was nowhere in evidence in the city's restaurants.

"That's because most of the Dutch chefs 20 years ago all trained in France!" says Joris Bijdendijk, the executive chef at Rijks, a prime example of a whole new breed of patriotic Dutch chefs more likely to train in Leiden than Lyon. Located in a wing of the Rijksmuseum, Rijks sources largely from Dutch suppliers. The payoff is a proudly homegrown menu that includes a sublime plate of local Anna Dutch caviar paired with scallop. "There is so much from our North Sea alone: bass, mullet, gray shrimp, sea bass, sole, turbot," says Bijdendijk. There is one standout dish in particular that is inspired by the Rijksmuseum's Dutch Master paintings themselves. Focusing on precise presentation, Bijdendijk centers a striking mille-feuille of beetroot on the plate, a playful, veg-centric homage to Rembrandt (whose self-portraits often feature the artist's face placed dead center on the canvas, staring at the viewer). 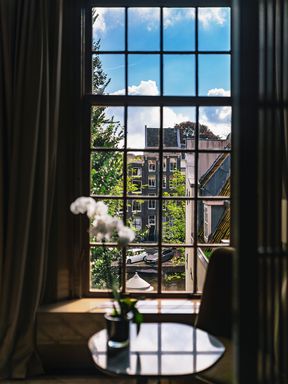 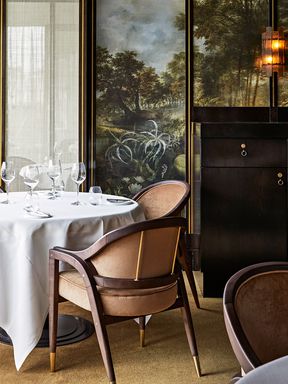 The fact that the restaurant sits in a wing of the Rijksmuseum suggests that more than a culinary renaissance is afoot. Amsterdam in recent years has been making a concerted push to bury its old image as a bachelor party gone wrong and regain its status as a cultural epicenter. All three of its world-class museums—the Rijksmusem, the Van Gogh Museum, and the Stedelijk Museum—have been refurbished, the red-light district is in the midst of gentrification, and the sinking gabled houses of the Vermeer-worthy arc of western canals are being raised up from their marshy moorings. The recovery of the singular Dutch table, proudly emphasizing the locavore larder, is part of a larger reclamation of Amsterdam's essential, original self.

The rebranded Amsterdam is on overt display at Moon, which revolves on the 19th floor of the A'DAM tower, offering a 360-degree view of the canal-seamed city. True to Dutch understatement, Moon rotates at a stately pace, and the view outside the floor-to-ceiling windows can come in second to a set menu that may include a plate of organic locally sourced chicken served with artichokes, a Dutch beef tenderloin paired with haricots verts, and a strawberry, rhubarb, and yuzu panna cotta. The only Amsterdam restaurant boasting a more dramatic setting is the pioneering De Kas, where diners eat in a circa-1926 greenhouse surrounded by gardens growing the fruits, herbs, and vegetables that land on their plates.

Not every new Amsterdam restaurant comes tucked into a theatrical setting. On my most recent visit to the city, I went looking for the smaller, scrappier chef-driven kitchens popping up all over town. At BAK, located in a whitewashed former timber warehouse overlooking the northern docklands, chef Benny Blisto was plating dishes like quail roused by tomato, saffron, and baked bell peppers, and fettuccine tossed with Zeeland mussels.

The same mantra—sustainable, seasonal, local—drives the kitchen at Stork, where you can dine on the freshest Dutch seafood on a long terrace next to the River IJ. And at Restaurant 212, the only appropriate finish after a plate of langoustine confit accompanied by duck liver, dashi vinegar, arabica bean, and katsuobushi is the 99% Dutch cheeseboard. (At the time of writing, Restaurant 212 is undergoing construction following a kitchen fire; they are projected to reopen by July this year.) 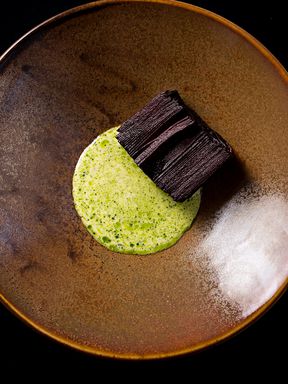 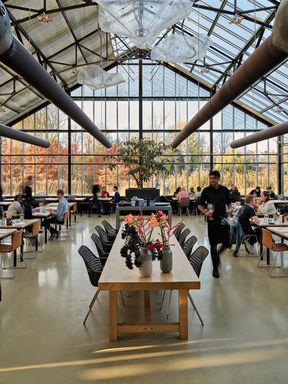 Chef Bas van Kranen ups the ante at Flore, where the walls are painted with a pastoral scene and the menu zealously embraces biodynamic ingredients. Kranen's dish of a single deep-sea shrimp swimming in a consommé made from shrimp heads paired with preserved raspberries is a lesson in simplicity, while his artichoke tart filled with bagna cauda mousseline, preserved truffles, and spicy brassica flowers is pure flamboyance. The culinary showstopper, though, is a plate featuring 30 biodynamic vegetables that have been variously smoked, barbecued, and cooked in hay.

That was the last dish of my most recent trip, but it was not my final bite. I figured it was about time to face my aversion to Holland's signature dish. As I approached a herring stand on the central Spui square, I circled warily, flashing back to my boyhood fear. I relented, and the minute I dropped a piece of salt-cured herring in my mouth, it was the best surprise—a sweet, briny, delicious lick of the North Sea. 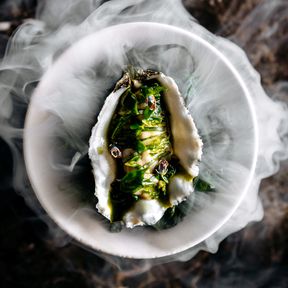 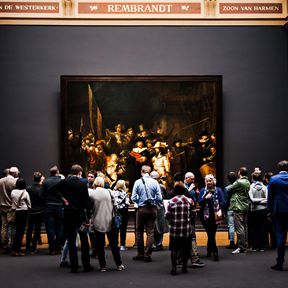 This venerable 54-room hotel is composed of 10 primarily 17th- and 18th-century townhouses joined together, so the interior resembles a kind of Escher print and offers the most ethereal views from its canal-side rooms. Among the added bonuses: a brasserie that moves outside along the Herengracht canal when the sun shines and a library lounge filled with 5,000 books, all signed by authors on tour who have stayed here, literally making the Ambassade the most storied hotel in town. Rooms from $167, ambassade-hotel.nl

This haven in a refurbished 17th-century burgher's canal house features 23 guest rooms replete with contemporary artwork and designer Marcel Wanders' neo-Gothic accents. Out back blooms one of the largest private gardens in central Amsterdam. Rooms from $262, canalhouse.nl

This tranquil, supremely stylish 40-room retreat overlooking the Keizersgracht canal offers a variety of guest room styles, but for the best splurge, book one of the heavily beamed lofts on the top floor. Its Michelin-starred restaurant Vinkeles is inside an 18th-century former bakery, and an all-day brasserie is located in the hotel's peaceful inner courtyard. Rooms from $381, dylanamsterdam.com 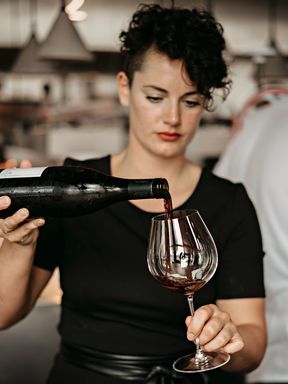 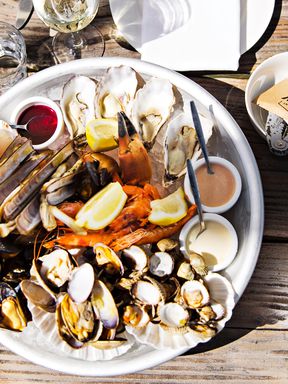 The most popular café lining the city's favorite living room, Spui square, serves lobster croquettes and a dame blanche sundae while you watch the passing impromptu fashion show worked by students from the neighboring University of Amsterdam.

Amsterdam's best food court, this vast hall features a range of stalls selling everything from new twists on classic snacks like bitterballen to crab bao buns, tacos, and a superb white bean falafel.

This circa-1786 classic bar is famous for its barrels of jenever, juniper-flavored Dutch gin, and its plates of bitterballen, the traditional deep-fried meat croquettes that taste better than they sound!