A traditional German beer garden is little more than a shaded grove with picnic tables, but US chefs and restaurateurs are enhancing the concept with spectacular food and design innovations that range from whiskey-barrel tables to a multimillion-dollar retractable roof. Here, the best beer gardens in the U.S.

This popular Lakeview garden concentrates on the beer, offering a strong selection of American craft brews and a number of spectacular bottles from Belgium, like Brouwerij Verhaeghe's Duchesse de Bourgogne, a complex fruity-and-sour blend of oak-aged ales. Cottonwood trees shade the picnic tables on its comfy patio. sheffieldschicago.com

This retracting-roof bar is an airy escape above the bustle of Mario Batali's maximalist Italian market complex, Eataly. The draw for beer lovers, however, is the brewing program. Two top Italian brewmasters and Dogfish Head's iconoclastic Sam Calagione collaborated with on-site brewer Peter Hepp, Jr., to make a series of remarkable cask-conditioned ales, like one brewed with fragrant Italian thyme. eataly.com.

This über-traditional German-style beer garden goes all-out during Oktoberfest, then gears up for Christmas with 26 trees and, it claims, more than 10,000 ornaments. The bar boasts that it was the first in America to serve Germany's ubiquitous Krombacher pilsner on draft, and the list also includes one of the country's most refreshing wheat beers, Weihenstephaner. derbiergarten.com.

With a punk rock jukebox and an official cycling team, Zeitgeist does not lack for Mission character, but its large outdoor space has the comfortable feel of a traditional beer garden. Sixty-four taps pour a wide variety of mostly American craft beers, including many from California and the Pacific Northwest. zeitgeistsf.com

Philadelphia's hip Midtown Village now has an excellent urban beer garden. Greek restaurant Opa converted its backyard (a former parking lot) into a hangout with ping-pong tables and a short food menu that includes pretzels and mustard made with Dale's Pale Ale. Four drafts include the spiced Allagash White, and bottles include the excellent Saison Dupont farmhouse ale from Belgium. opaphiladelphia.com.

This asphalt garden from the owners of the German restaurant Suppenkuche has a minimalist focus on quality, serving just a handful of excellent pilsners, wheat beers and schwarzbiers in huge one-liter steins. Snacks include flavorful bratwurst and fluffy pretzels. biergartensf.com

Colorado's legendary craft beer industry is on display at this new 8,000-square-foot space, which offers draft beers and bottles from the state's top breweries, such as Avery, Odell and Left Hand. Located next to the Wings Over the Rockies Air & Space Museum, the bar is the latest addition to a converted 1939 Air Force hangar that currently hosts offices and a farmers' market. lowrybeergarden.com.

Known for producing some of America's most intensely hopped, bracingly bitter ales (like the flagship Arrogant Bastard), Stone's namesake venue is one of the country's most pleasant and beautiful. A 12,000-square-foot restaurant adjoins a verdant one-acre organic garden with olive trees, a koi pond and a fire pit along its paths—which are excellent for wandering with one of the bar's 30-plus draft beers in hand. stoneworldbistro.com

Yes, it's the kind of German bar that offers beer in "das boot"—a large glass shaped like a shoe—but the Red Lion Tavern's divey charm is one factor that makes it such a well-loved fixture (since 1959) of L.A.'s arty Silver Lake neighborhood. The airy upstairs garden offers a strong lineup of German beers, like the roasty-but-crisp Köstritzer schwarzbier. redliontavern.net.

The name means "cheers!"—something frequently said over this bar's large communal tables. Excellent wurst is on the menu, and the beers are all German—which sets it apart in the microbrewery-dense Pacific Northwest. prostportland.com.

A focus on local breweries results in some excellent beers on draft, like Yazoo Brewing Company's unusual Gerst, a refreshingly clean-tasting, cool-fermented ale that could be mistaken for a lager. Built in a 1940s house, the bar's outdoor area consists of a large, covered wraparound patio. riversidevillagepub.com.

A tasty Viennese-style menu (think Hungarian beef goulash and Sacher torte) is one draw at this hugely popular beer hall in Greater Downtown. Draft beers are largely German, though a convincing Weizenbock-style beer from California's Lagunitas is also in the lineup. The wine list includes a number of excellent Austrian bottles, like the rich, floral Heidi Schröck Furmint. grunauerkc.com. 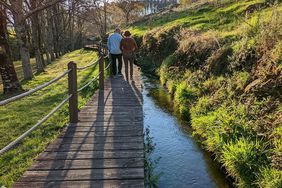