Your server has absolutely heard the one about the halibut.

The vast majority of us are not stand-up comedians. We're not up on a stage with a microphone in our hand whilst tossing out one-liners to a crowd of people making their way through a two-drink minimum. So why do so many customers go into a restaurant and suddenly think they are so very funny? Stand-up comedians might make up .1% of the population, but 75% of restaurant goers think they’re the next Jerry Seinfeld.


People who wait tables have heard every iteration of every joke that can possibly be made while sitting in a restaurant. If you think you are about to blow them away with your witty repartee, prepare yourself to be disappointed. Actually, you probably won’t realize that your server is unimpressed because servers are great actors. They will toss their head back in faux laughter as if your joke about how awful the food was even though you licked your plate clean is the first time they’ve ever heard it. It’s not. And it’s probably not even the first time they’ve heard it that day. That’s just one of the jokes that are more stale than the day old bread in the kitchen that’s on its way to Croutonville. The only thing older in the restaurant than these poor attempts at humor is the gum underneath the table. Behold, these are the other restaurant “jokes” that need never to be uttered again.

If by chance there is halibut on the menu, by no means do you need to order it “just for the halibut.” Every time someone makes that joke to their server, Henny Youngman doesn’t just roll over in his grave. He spins violently out of control in an effort to come back from the dead and force feed the jokester an ancient piece of scrod.

When the bill for your meal is placed on the table, do everything you can to refrain from saying “Hey, we didn’t order this!” Do whatever is necessary to keep those words from crossing your lips. Bite down on a wooden spoon if you must, but don’t say it. Hearing that phrase could cause your server’s eyeballs to roll so far back into their head that it might permanently damage their eyesight.

Super, thanks for asking.

Sometimes an entree comes with a choice of a soup or a salad. These are two entirely different entities and your server is happy to bring whichever you choose. What they don’t want to bring you is a Super Salad because unless you’re at a superhero-themed restaurant in an amusement park, there is no such thing. If you say you want a Super Salad, all we can do is hope that Superman will fly into our lives and circle the orbit of the earth fast enough to make time go backwards so you can think twice about your wisecrack.

At the end of your meal, maybe you want some decaf coffee to top things off. When your server is pouring said decaf coffee into your cup, it’s all right to confirm that it is in fact decaf. It’s not okay or funny to say, “If I’m still awake at 3:00 a.m., I’m gonna call you to complain.” First off, no you won’t. Your server isn’t going to jot down their cell phone number on a bev nap for you so you can call later on to complain about your insomnia. Second of all, it’s way more likely that it’s always decaf anyway.

You don’t need to “complain” that the gazpacho is cold or feign mock surprise when you’re not asked to show ID for your alcoholic beverage. We all know gazpacho is supposed to be that temperature and we also know that no one thinks you were born more recently than 21 years ago. When the server asks if there is anything else you need, you can forgo any of these requests: a million dollars, the winning lottery numbers, or “you on a plate” which is not only not funny, but offensive too. None of these flailing attempts at comedy are going to make anyone laugh and Simon Cowell is not lurking at a nearby table ready to send you to the next round.

Of course, you’re just trying to be likable and make your server smile and it’s a noble effort that servers appreciate. No server is going to straight-up tell you you’re no Jim Gaffigan or Wanda Sykes. They might think it, but they won’t say it. There’s a time and a place for dad jokes and if that is your thing, then embrace it. Point to your empty wine glass and say there must be a hole in it. When the server asks how you like your steak cooked, say medium rare, done well. You’ll laugh, the server will laugh, and things will move forward. You’ll think you’re funny and your server will pretend that you are. But if you are an actual standup comedian and want to joke around with the waitstaff, you better be really funny. 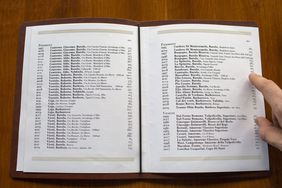