Crank Up the Heat on This French Bistro Classic

I never expectedto walk into a Mexican restaurant in Chicago on a chilly evening, only to spend the following months evangelizing the French onion soup I had there to anyone who would listen. But that's exactly what happened after I ate dinner at Tzuco, chef Carlos Gaytán's stunning re-entry to the city's bustling dining scene. The restaurant is an ode to the chef's hometown of Huitzuco, Mexico—but with a French twist, a nod to his experience in haute cuisine. The menu is filled with showstoppers, but the dish I still find myself daydreaming about is that simple bowl of soup.

At Tzuco, the French onion soup arrives to the table piping hot, topped with a bubbling layer of Gruyère cheese—no surprises there. Hiding under the blanket of cheese, a thick slice of baguette soaks up a soup suffused with flavor from a mountain of jammy onions, balsamic vinegar, and bay leaves. French onion soups can lean quite beefy, but Gaytán's uses a gentle base of chicken broth that allows the allium flavors to truly shine.

The magic, however, is the slight charred flavor that permeates the bowl. It's a taste you can't immediately pinpoint, but it makes you want to never put your spoon down. Gaytán achieves it by roasting poblano chiles and tossing thin strips into the broth after pulling the pot off of the heat. It's a simple trick, but one that will have you thinking about this soup long after you've sopped up the last drop.

Get the Recipe: French Onion Soup with Roasted Poblano
Was this page helpful?
Thanks for your feedback!
Tell us why!
Related Articles 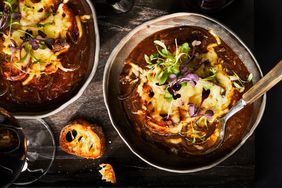