These corn chowder recipes combine the vegetable with a variety of eclectic ingredients. Some of our favorites include a corn-and-cod chowder, a corn chowder with bacon and sea scallops and a Peruvian shrimp-and-corn chowder.

The corn and the clam perfectly complement each other in this delicious chowder recipe.

Look for sugar-cured bacon, which is smoky and sweet but mild enough not to overpower the other flavors here.

With its all-American ingredients, this New England-style chowder is a comfort-food classic. The soup needs only bread, or traditional oyster crackers, as an accompaniment.

The Chew co-host Carla Hall has a surprise ingredient in this recipe: a can of creamed corn. She uses it to add sweet corn flavor to her lightened take on chowder and to thicken the broth in place of too much cream or flour.

The grated plantain in this coastal Ecuadoran soup gives the dish a wonderfully light and creamy body.

Andrew Zimmern adds depth to his rich seafood chowder by making an easy stock with corn cobs and shrimp shells. Plenty of cream and butter make this chowder irresistibly decadent.

In Peru, small streams wend their way from the mountains to the coast, and the delicious shrimp that fill them are cooked with local corn, squash, and potatoes to make this South American chowder called cupe.

Our simple soup really highlights the taste of sweet summer corn, but since the vegetable is available virtually all the time, you can make the chowder year-round. You can even use frozen corn, though fresh is best.

Melissa Rubel Jacobson deepens the flavor of this luxurious ham-and-corn chowder by simmering the scraps (the ham rind and corn cobs) in water to make a quick, tasty stock.

Not only is yellow corn a good source of vitamin B, magnesium and thiamin, it also contains carotenoids (organic pigments with health benefits) not found in white corn. Ani Phyo likes to add a handful of vitamin A-rich spinach or soft lettuce to the chowder. "Then it becomes part-soup, part-salad," she says. 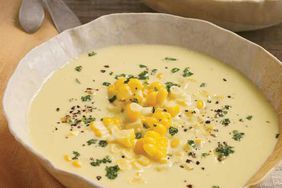 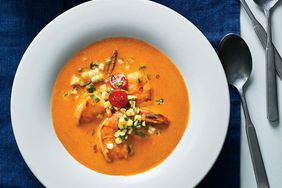 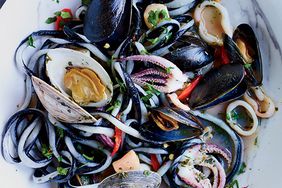